Jake Birkett, owner of Grey Alien Games (Ancient Enemy, Shadowhand, and Regency Solitaire) has shared an interesting graph showing how well wishlists convert into purchases depending on the month added.

Birkett used the wishlists for the studio’s 2020 title Ancient Enemy. 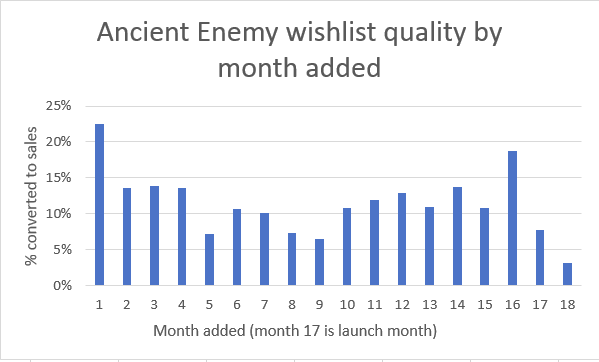 Month 1 was when Ancient Enemy‘s Steam page was set up. Month 16 is the month precceding the launch, when the studio discussed the game a lot on social media. Month 17 is April 2020, that’s when the game came out.

Month 1 saw the biggest spike in conversions. A lot of those wishlists come from long-term fans. The subsequent three months also converted well.

The middle batch of wishlists didn’t convert quite as well, but towards the release, the conversion rates improved, with wishlists motivated by the growing hype. The upward trend culminated in Month 16, with Month 17 wishlists and post-launch wishlists converting very poorly. “Launch month is down in terms of conversion %, because LOADS of people add your game to their wishlist after launch because they don’t intend to buy it until it goes on sale,” Birkett explains.

The developer called on other indies to share their data for wishlist quality by month added. The methodolgy for this is that “you’ll need two separate csvs from the Steam wishlist backend, then you’ll have to summarise by month and work out the % conversion.”

Commenting on the graph, Aleksey Dmitriev, indie game developer from Russia, has reiterated the truth still questioned by some indies. “Looks like there’s no real reason to delay Steam page creation to late months, since people from 1y+ convert nearly as well as those who wishlist it few months before the launch.”