Organic discovery and app store featuring to be declared dead in 2023, according to Deconstructor of Fun
02.02
Dwarf Fortress made $7.2 million in January, 44 times more than in all of 2022
02.02
PlayStation reports 53% Q3 revenue growth, driven by strong sales of consoles and third-party games
02.02
Tenjin and GameAnalytics release Q4 Hyper-Casual Games Benchmark Report
01.02
Chris Zukowski: Steam can only promote up to around 500 indie games per year
30.01
Wargaming top manager called a terrorist by KGB Belarus
30.01
AI USE CASE: How a mobile game development studio saved $70K in expenses
27.01
Sensor Tower: Subway Surfers was most downloaded game in Q4 2022, but the Stumble Guys showed fastest growth
26.01
The Day Before loses its page on Steam. Developer cites trademark complaint
25.01
125 games industry professionals from 85 companies attended WN Connect business event in Belgrad
24.01
All news
Dev Interviews 17.08.2022 18:15

Sezhes on its Lovecraftian JRPG Frail Hearts: Versicorae Domlion: “The true horror lies behind the scenes”

Developed by the Italian team Sezhes, Frail Hearts: Versicorae Domlion is a new eerie JRPG / visual novel featuring four stories set in a dark and dangerous world. The studio’s founder Fiore has opened up about the game’s storyline, Lovecraftian aesthetics, combat system, and three-year run to the launch.

Frail Hearts: Versicorae Domlion came out on Steam on August 16. It tells four stories set in a mysterious city of Gris where characters have to overcome their own burdens and face horrific creatures in turn-based combat. It is too early to say what the overall user perception of the game will be, but the first players are praising the title’s amtosphere, characters, and old-school vibes. 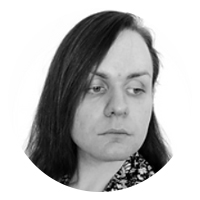 I’m Fiore, an Italian artist who decided to use video games as a fulfilling method of expression and translate all I’ve previously learned about traditional art into digital art.

After completing a master in Concept Design for video games, I decided to form a team of passionate people that I had the luck to meet during my university studies and travel  to give birth to a story I’ve been working on for quite a long time.

Personally, I got into gamedev because it’s about self-expression and freedom. That was also the case with all of all the members of our studio.

As leader, I try my best to make Sezhes a place where everyone can express their uniqueness and point of view. And as a team, we really wish to make players feel equal, while playing Frail Hearts. 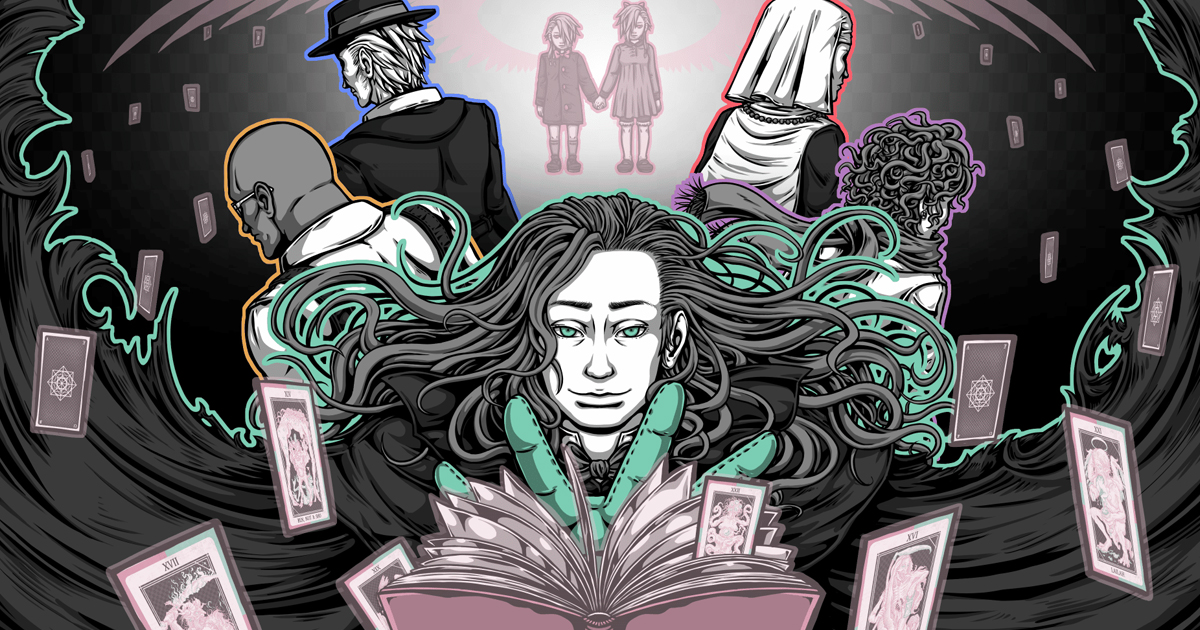 Since storytelling and illustrations are the strong points of this project, we carefully chose environments and character aesthetics. A grayscale palette and touches of bright colors were a starting point for expressing our focus: to accompany the player into a world of strong emotions. You can immediately get an idea of a person’s temperament by their unique color and home.

Frail Hearts also features a distorted way of telling its plot. The four stories exist as separate ones. Each has its ending, just like a small theater act. But true horror lies behind the scenes… All the possible consequences of making a wish come true.

So the most challenging feature was undoubtedly the overall story’s connection. We want players to live the story as freely as possible, but at the same time make them aware that mindless freedom can be very dangerous. Understanding the right balance between character growth, side-mission timing, and story checkpoints was essential!

Frail Hearts is a story of self-discovery. An evolution. Coming out in order to change the world you’re not able to live in. At any cost.

Lovecraft was the starting point for our choice of the horror genre, as the game was born after a school project dedicated to it.

Storywise, I took most of my inspiration from fairy tales and religions, from European to Asian ones. I’m also a big fan of Japanese culture and arts, such as manga and anime. So it was natural for me to take a lot of ideas from my fave ones.

Drakengard and Shin Megami Tensei are probably the most influential in my mind, but also magical girl franchises (Sailor Moon, Utena) and monster collecting ones (Digimon and Yu-Gi-Oh!). 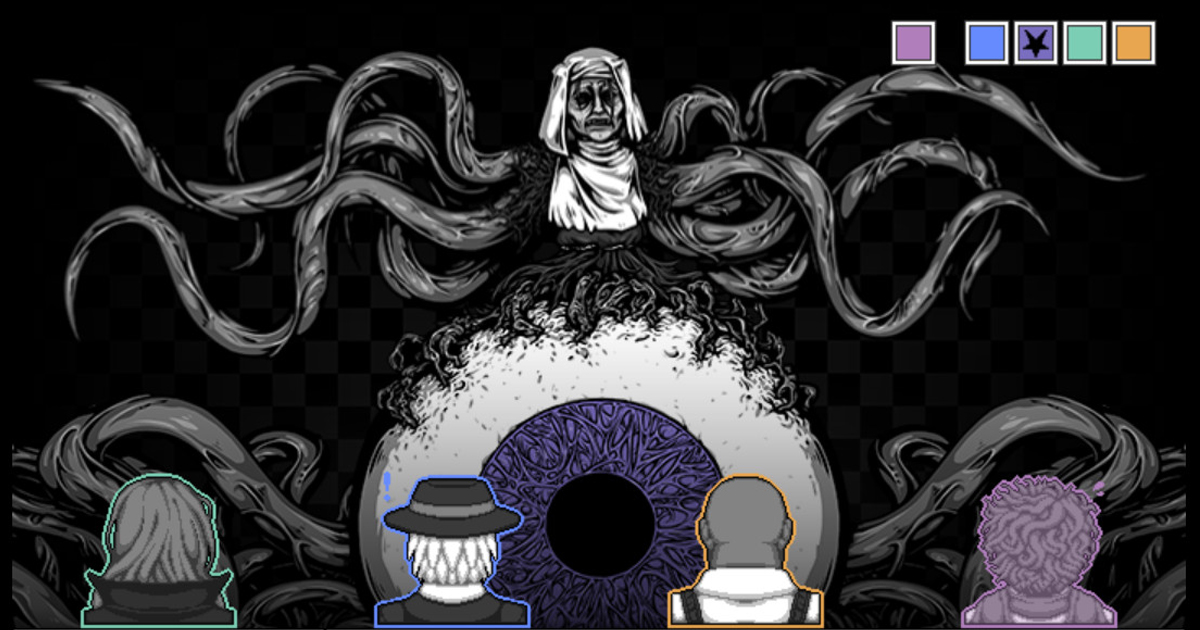 We are fans of old JRPGs and D&D, so we chose to focus on the character’s unique role in battle. Each of the 5 playable characters has a personal fighting style that reflects their background. However, things may change depending on the story’s development and your personal way of interpreting them.

Players will need to defeat 22 bosses if they want to survive until the end, and teamwork will be the key to victory. FH’s battle system, just like the game’s fighters, is an experience to learn step by step.

Facing challenges during the development process

Frail Hearts was created with RPG Maker MV and improved thanks to this engine’s wonderful community. 2D assets were produced with Clip Studio and Piskel. We found these tools very useful for an indie team like ours, as they support a lot of additional features at a very friendly price.

As Sezhes, we started this project on July 1, 2019, so it took us three years to make the game.

Our first approach was to build a strong story and its script, then focus on references (on place, mostly) for world building. Concept phase took us about six months, as our intent was to gather as many ideas as possible. We discussed our personal feelings, then created the best version of our intentions starting with images.

We mostly rely on people we know, as face-to-face discussions help us a lot in processing and improving our working routing. We constantly search for feedback from friends and professionals who are following our growth, mostly thanks to social media.

As you can imagine, the pandemic heavily influenced the game’s production, not only from a financial point of view. It involved a lot of mental distress, but it also gave us more strength and resolution to make this dream come true!

We collected all of our life’s experiences and knowledge and kept this project alive. 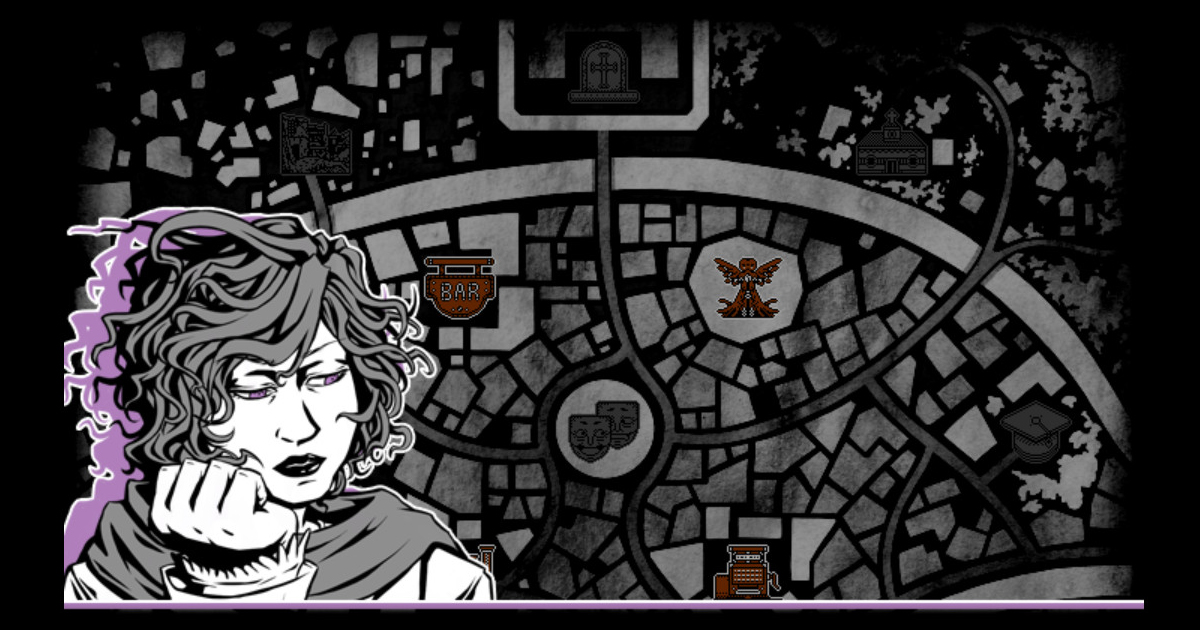 Finding a publisher and looking into the future

Surprisingly, Ravenage appeared in our lives right before the game’s production was completed and we were about to begin its quality assurance. Having a publisher was a lifesaver, as their experience did improve the game’s quality and market presence on Steam. For indie developers like us, this was the last piece needed in order to complete the project, and we’re very grateful for their constant help!

Working under the publisher also lets us understand players needs more in depth and value their time and investment in our project. Constant improvement is something we focus on every day.

Although Frail Hearts was conceived as a stand-alone story, its structure does allow us to expand it as we wish.

Alongside the game’s soundtrack, we produced an artbook and a strategy guide as DLCs. They are intended not only for the game’s completion, but also for a side-project inspired by… well… that’s a secret for now!

We intend to make good use of the feedback we’ll receive after the release and schedule as many improvements as possible. One of our top priorities is to translate the game — right now, it is in English and Italian only — into many other languages.

So FH’s life is only beginning, and much more content will come in the future, not only in the form of video games, but in other media as well.