John Carmack on video game preservation and why companies suffer more harm by destroying something dear to players
06.02
Jeff Gaimon on expanding EA Originals beyond just indie games: “It’s like a menu. It depends on what devs want”
06.02
Microsoft’s chances of clearing Activision Blizzard deal in US and Europe to fade away if UK watchdog decides to block it
06.02
It Takes Two hits 10 million unit sold. “Nobody expected this,” says Josef Fares
03.02
Over 1 million Chinese players apply for refunds due to expiration of Blzzard’s agreement with NetEase
03.02
NCSoft West lays off 20% of employees as part of ‘global realignment’
03.02
Organic discovery and app store featuring to be declared dead in 2023, according to Deconstructor of Fun
02.02
Dwarf Fortress made $7.2 million in January, 44 times more than in all of 2022
02.02
PlayStation reports 53% Q3 revenue growth, driven by strong sales of consoles and third-party games
02.02
Tenjin and GameAnalytics release Q4 Hyper-Casual Games Benchmark Report
01.02
All news
Featured 23.04.2019 14:29

StreamElements and Stream Hatchet released the State of the Stream report for Q1 2019. The report analyzes viewership data by streaming platform, by streamer, and by game. 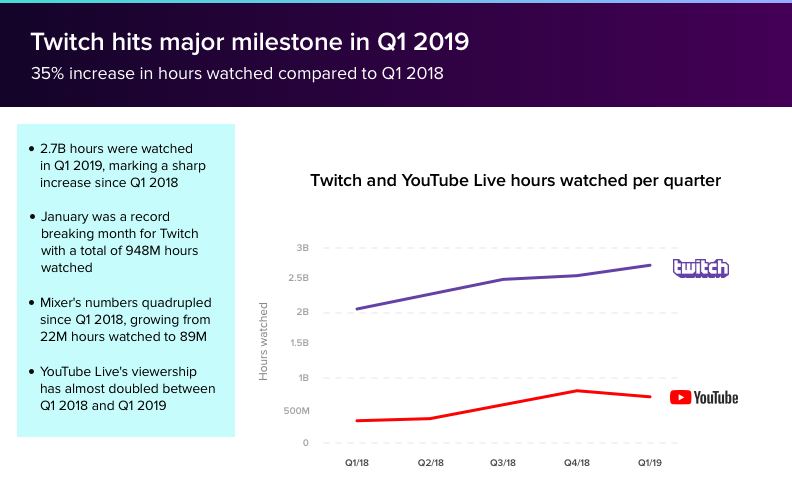 YouTube Live might be falling far behind, but it still shows consistent growth, with its viewership almost doubling over the last year.

The holder of the distant third place, Mixer, exhibits growth that is even more impressive. Since Q1 2018, its numbers increased from 22 million hours watched to 89 millions. 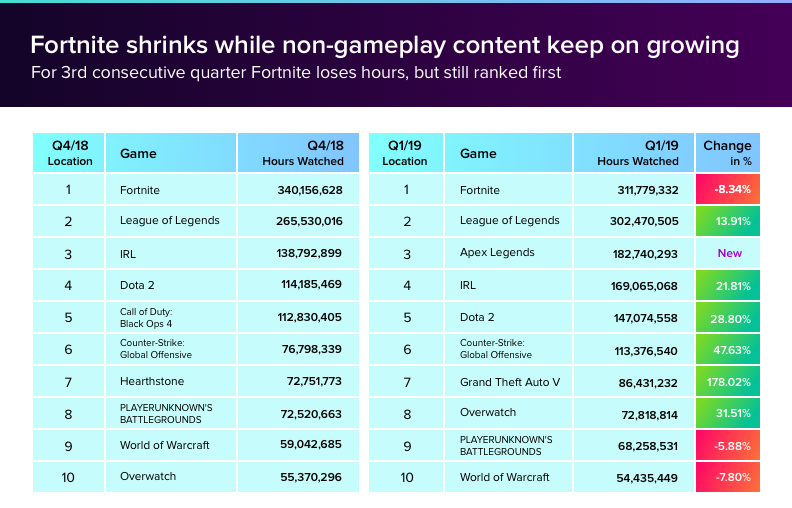 In February, Fortnite plunged below 100 million for the first time, but new releases have helped it regain altitude at 118 million hours watched.  Despite 8% decline in viewership compared to Q4 2018, Fortnite has remained the most watched game for the third consecutive quarter.

League of Legends is the second most watched game and enjoys 13.91% increase from Q4 2018

Apex Legends drops from its 40 million peak in February by 75% to 10 million hours watched a week. Only two top streamers played it in March.

Notably, GTA V finishes seventh in the top 10. Played by streamers like Summit1G, SodaPoppin, Lirik, Vader, and Buddha, the title saw a breath-taking 178.02% increase in viewership since Q4 2018. It just shows how powerful streamers can be in terms of setting trends.

As far as top streamers are concerned, the leaderboard is constantly shifting. Shroud set the record of 15 million hours watched in February, but he left the top spot due to an injury.  So far, Summit1g, Ninja, and Tfue are the only streamers who haven’t left the top 5 in 2019.