Chris Zukowski: Steam can only promote up to around 500 indie games per year
30.01
Wargaming top manager called a terrorist by KGB Belarus
30.01
AI USE CASE: How a mobile game development studio saved $70K in expenses
27.01
Sensor Tower: Subway Surfers was most downloaded game in Q4 2022, but the Stumble Guys showed fastest growth
26.01
The Day Before loses its page on Steam. Developer cites trademark complaint
25.01
125 games industry professionals from 85 companies attended WN Connect business event in Belgrad
24.01
Blizzard caught up in scandal. Again. This time it is all about ranking its employees
24.01
Cyberpunk 2077 quest director Paweł Sasko on game’s non-linearity: “Players expected more because of the fact how The Witcher 3 is built”
23.01
Key success factors for ZERO Sievert, top-down extraction shooter that generated over $1 million in its first week
23.01
Dragon Age: Dreadwolf production director Mac Walters leaves BioWare after almost 20 years
23.01
All news
Featured 20.01.2021 15:19

Thomas Altenburger on piracy and Switch getting increasingly crowded for indies

He specifically looked at PC and the Nintendo Switch and found that over the last three years, Switch has become less attractive for indies.

The stats might sound a little too dramatic. After all, NeuroVoider came out at a time when Nintendo’s eShop was a much lonelier place. Plus, it didn’t perform all that well on PC. ScourgeBringer, on the other hand, launched during the platform’s most crowed month, while showing very strongs sales on PC. “ScourgeBringer did 4 times less [revenue] than NeuroVoider on Switch, while doing 10 times more on Steam,” the developer adds.

Still, the point is solid. Sales are not what they used to be on Switch. In fact, if you are not self-porting for Switch, Altenburger cautions against spending resources on a port for the platform.

While PC in this context is becoming an increasingly attractive platform, especially thanks to deals like Game Pass, the piracy rate is very high, according to Altenburger. 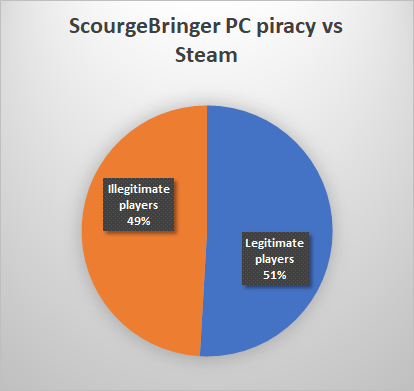 Altenburger suggests that this split is the “industry standard” for indies. “My interpretation is that piracy is cultural,” he writes. “People who pirate are going to do it anyway and have no intention to convert.” So called “ethical pirates” who do convert are anly 0.01 percent which is negligible in the big picture.