Steam’s revenue share model is not justified, according to the most developers. This is evidenced by the results of the GDC survey.

The survey involved about 4 thousand game developers. 73% of them are convinced that Valve should take a smaller share of revenues from developers. Currently Steam takes 30%. A year ago though, the marketplace made an exception for blockbusters: developers can now keep 75% of the revenue if the game generates $10 million, and 80% if the revenue exceeds $10 million.

Nevertheless, for the majority of developers, the 70% share is too small. 25% of respondents, according to the survey, want to keep 85% of their game’s earnings. 21% of developers want a 90% share. At the same time, one fifth of the respondents found it difficult to answer, writes Gamasutra. 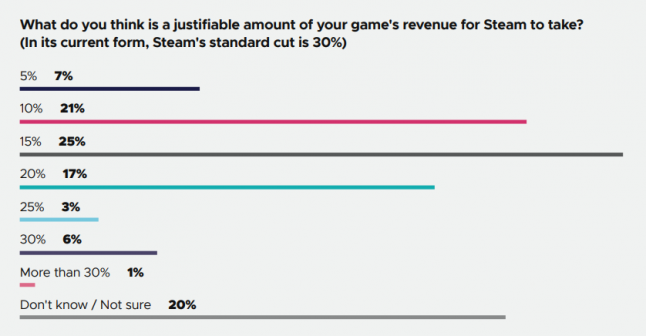 30/70 percent revenue split was considered the industry standard until last year. The situation changed when the Epic Games Store emerged offering developers 88% of the revenue. For a number of developerds, this factor became decisive when choosing a distribution platform.