Chris Zukowski: Steam can only promote up to around 500 indie games per year
30.01
Wargaming top manager called a terrorist by KGB Belarus
30.01
AI USE CASE: How a mobile game development studio saved $70K in expenses
27.01
Sensor Tower: Subway Surfers was most downloaded game in Q4 2022, but the Stumble Guys showed fastest growth
26.01
The Day Before loses its page on Steam. Developer cites trademark complaint
25.01
125 games industry professionals from 85 companies attended WN Connect business event in Belgrad
24.01
Blizzard caught up in scandal. Again. This time it is all about ranking its employees
24.01
Cyberpunk 2077 quest director Paweł Sasko on game’s non-linearity: “Players expected more because of the fact how The Witcher 3 is built”
23.01
Key success factors for ZERO Sievert, top-down extraction shooter that generated over $1 million in its first week
23.01
Dragon Age: Dreadwolf production director Mac Walters leaves BioWare after almost 20 years
23.01
All news
Game Development 09.06.2016 15:00

Clicker As a Metagame

What’s wrong with clickers and why does every time management game need one? 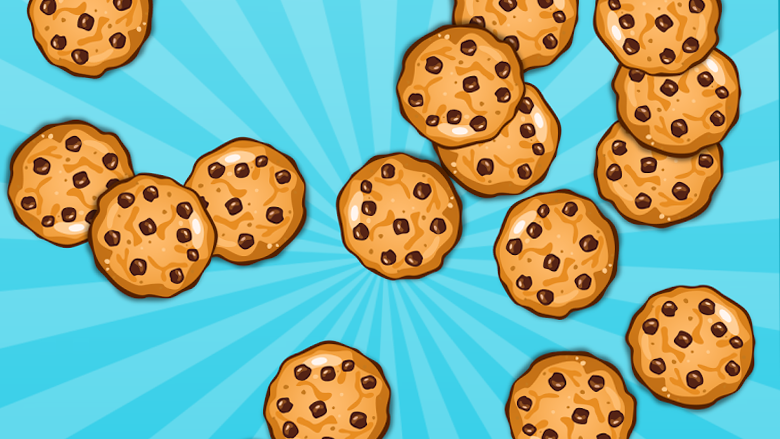 Clickers (a.k.a. “cookies” or “idles”) are games built around simple actions (such as clicking on the screen) repeatedly to gain currency.

First minutes into this game, the player has to perform simplistic actions to achieve results. For example, tap cookies to collect them. The collected cookies serve either as a resource or soft game currency, which is to be spent on additional instruments that collect cookies automatically. The more such instruments the player acquires, the faster number of cookies grows. Very soon, the player’s presence becomes unnecessary because it is impossible to tap 3k cookies per second by hand.

This is one of the two basic problems of the genre: the initially crucial aspect loses relevancy over time. The game starts playing itself, not needing the player anymore.

On the other hand, the game does require the player’s participation to increase the pace of cookies’ collection. However, his or her role is reduced to building new instruments, which takes almost no effort. This is the genre’s second basic problem.

That said, such games generally get repetitive and boring.

The value of the project, where you can only watch mindlessly growing numbers and build abstract constructions, is very soon lost. If the game demands little to no action, the player will spend on it little to no time.

Despite such games inspire no loyalty, developers keep on making them. The thing is that the flow of playerbase is balanced by low entrance requirements. It doesn’t take much learning to see that tapping achieves the result, be that cookies collected, monsters fed, dragons slain or something like that.

Some developers have understood that clickers can win audience if they have a unique appeal. An example of this approach is an ironic project Make it Rain. The authors have built hype around their game in mass media by declaring that they make on it $50,000 a day. In this game, “cookies” are dollars printed by players. The money can be used to buy lobbyists and local politicians who increase income, just like in real life. 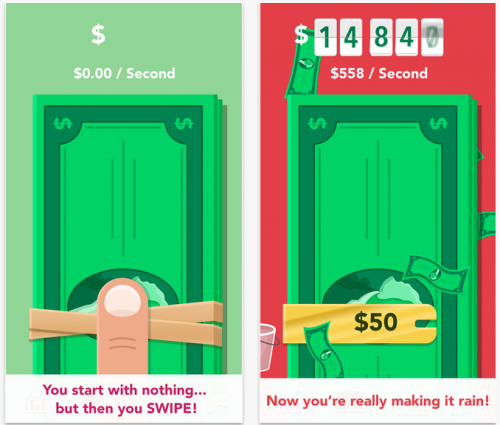 The Bitcoin Billionaire has exploited the growing popularity of bitcoins. Though this game looks mediocre, players are attracted by its concept. They take on the role of someone like an amateur investor or a geek who decided to profit from the new digital currency. 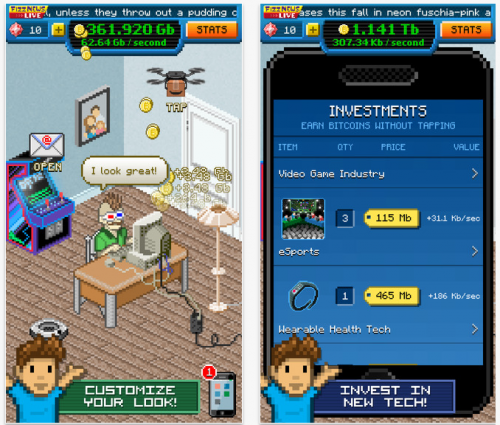 But have these games become long-time hits?

The answer is no: they are found low in download charts. However, it should be remembered that Make it Rain had been App Store’s 16th top grossing app in the US, and Bitcoin Billionaire had been 57th in Great Britain.

In addition to that, the original game of the genre, Cookie Clicker, had scored up to 200,000 daily active users on the first month since its release in 2013. However, the Android version, which was released in September of that same year, has been downloaded from 1 to 5 million times as of today. That’s a good rate, but not so good for the pioneer of a new genre that could – and was expected to – hit digital stores. 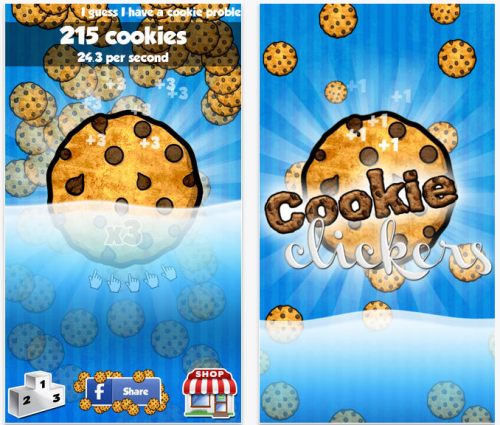 Most clickers generate income from advertisement rather than microtransactions, because there is no sense spending real money in clickers. The buildings appear instantaneously, and other processes, like resource accumulation, can easily be accelerated. Why wasting cash on a game where everything develops really fast without the player’s interference?

All in all, releases of such projects, though frequent they may be, are rarely covered in the gaming press. They neither gross much money nor increase download rate.

However, what if we look at them from a different angle?

This project was developed by Game Hive Corporation – a company that had earned the audience’s favors by the Beat the Boss franchise. That game was a curious variation of the Talking Tom app, where instead of petting a cat players had to destroy a boss by employing inventive tactics. That title was a creative revolution in the stagnating genre. 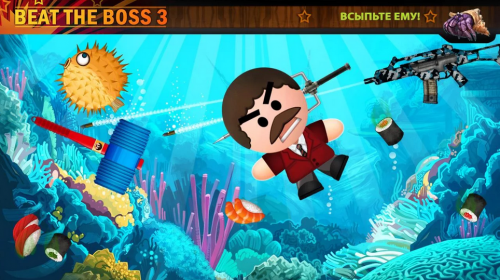 What distinguishes this game from the legion of other сlickers is that tapping doesn’t give anything to the player. Instead, the main character in Tap Titans is a warrior that beats monsters. One tap equals one blow. As the character gets stronger, each tap deals more and more damage. 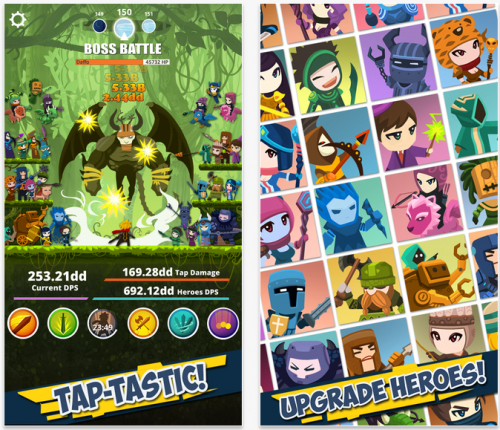 Character development is based on soft currency. The currency is earned by killing off monsters, which is not very easy (not because they fight back, but because some have trillions of HP). Also, additional heroes can be bought. They will attack monsters automatically and level up various skills, which upon activation cause effects that last some time.

Of course, these novelties haven’t solved the genre’s core problems. Sooner or later, a moment comes when quantity overcomes quality, and the action gets monotonous. However, this new interpretation drives such projects closer to more versatile farming simulators. The game holds the player by giving them new bosses to tap dead, new locations to explore and new heroes to level up.

This evoked in me a certain simple thought that I had had under the impression (though not lasting) of another Clash of Clans copycat. To my surprise, it had been released not by some no-name Chinese studio; the developer was Big Huge Games – a phoenix risen from the ashes.

The makers of the DomiNations are well experienced in the gaming industry. The founder of the studio – Brian Reynolds – was a leading designer behind Civilization II, Sid Meier’s Alpha Centauri, Rise of Nations and other projects. The newly released title can certainly be called a union of traditional strategy and gameplay familiar to mobile users. In other words, this is a “clash of clans” full of its own amazing ideas. I would like to elaborate on one of them. 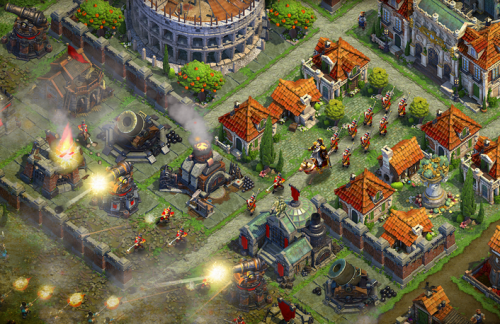 First hours into the game, there are no decent farms, the built ones are too slow at generating resources, and the army is in its infant state. What is there to do for the player? The game offers the answer: hunting.

Hunting in DomiNations is kind of a mini-game. The territory of the base is teeming with life that can be harnessed by dwellers. Hunting is not a one-click process, but it seldom lasts more than a minute. Thus, the player finds an entertainment that doesn’t affect gameplay so much (hunting brings a considerable amount of resources only during the first stages of the game session). If you don’t want it, don’t do it, simple as that.

But what about clickers, after all?

Personally, I deem it a serious problem of many modern time-management titles that there is nothing like what I call “gameplay just for fun”. Referring to Michail Katkoff, I am bored by a farming or building simulator with no metagame.

“In my mind, the most distinctive element of any mid-core game is the metagame. Metagame is the invisible part of the core loop that you have to experience. The part, where players don’t actually earn or consume any resources but simply stay engaged in the game with a simple goal to optimize their progress”.

Another good example is a title Heroes Charge, which is an American copycat clone of the Chinese game Dot Wars that was also recently released in Western stores. 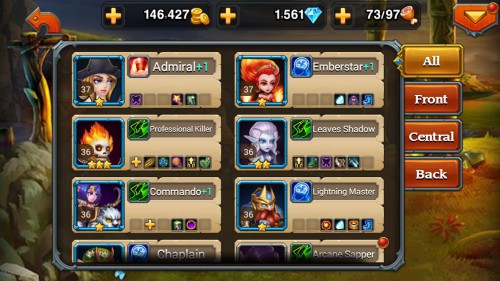 In this game, you can send up to five heroes to fight in the arena. The total amount of heroes is much more than that, so there is plenty to do with them: pick right ones, study their stats and skills craft weapons for them etc. What is boring in other games, Heroes Charge makes it feel interesting and deep.

All those actions comprise metagame.

Obviously, such mechanic would look out of place in mass consumption time killers, but a slightly complicated, Tap Heroes’ lookalike clicker would be a nice compromise.

What quality will they be of? It depends on what goals the developers would like to achieve: make a game session longer, or make a new monetization point.

Clearly, I look from my own perspective: a project could be much to my liking, but I don’t want to stay idle while something is being built (or everything has been built). I perceive it as an attempt of the game to exclude me from the process. The game kinda waves me goodbye, see you later. I do come back later, make a couple of clicks… and then again, we part.

We all understand that mobile games have to have short sessions. But is it right to leave aside players who can and want to spend more time in a game they like?

I think not. So, one of the possible decisions for those players is a clicker.