Unity Asset Store stands with Ukraine, but fails to properly pay hundreds of Ukrainian devs for over 6 months

Unity supports Ukraine-based developers on its Asset Store, but many of them have been experiencing trouble getting money for months. The official payment methods simply stopped working with the start of Russia’s invasion, and the company still doesn’t seem to have found a proper solution. 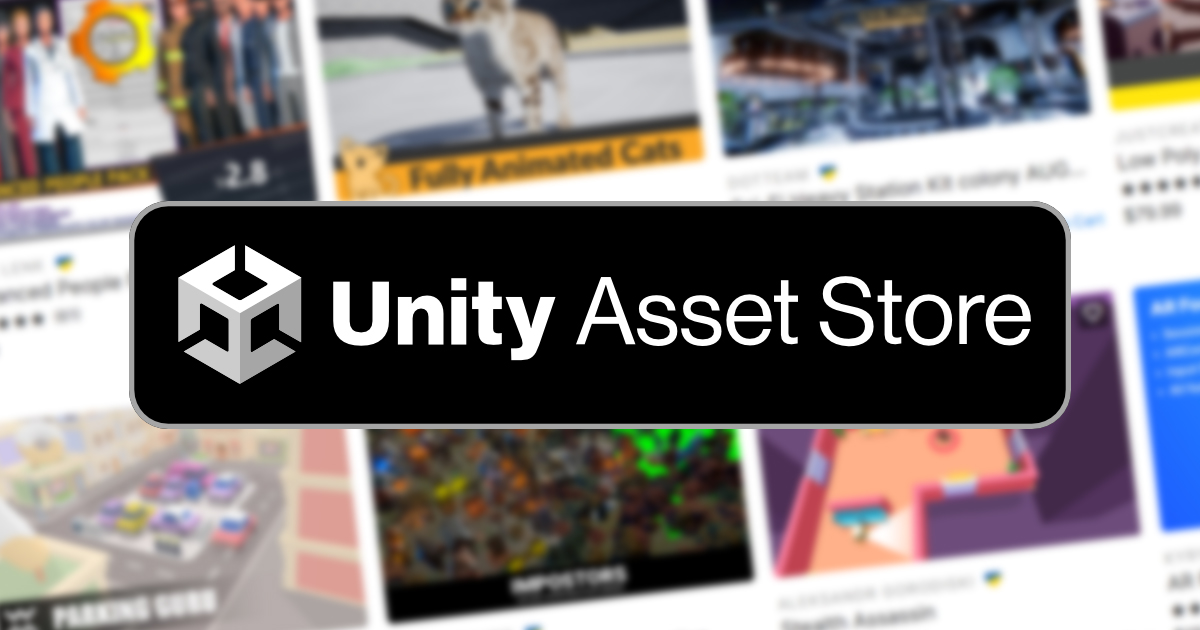 When the war in Ukraine began on February 24, many local developers started having trouble getting money from the Unity Asset Store. We contacted several Ukrainian asset creators to see what they think about this issue and how it affects their lives.

Developers who were due to get paid in April have seen their quarterly wire payouts disapproved or reversed. The latter means that the transfer is returned to Unity, with the company then trying to automatically repeat it next month. If the payout is disapproved, it will be delayed until the next quarter.

According to a post from Unity’s private forums, over 50 Ukrainian publishers were affected. The number is likely much larger, given that there are over 500 asset makers based in Ukraine.

One of the key issues is that the Unity Asset Store is the main source of income for hundreds of small developers. “A lot of publishers can’t receive money for at least 4 months,” Ukraine-based indie team Frostweep Games told us in August. “A lot of publishers even don’t have money to live on because of that, but some people are trying to use intermediary banks for transfers.”

At the time of writing, the situation remains the same, so the problem with the Asset Store payouts has persisted for more than six months now. According to Frostweep Games, Unity says it is working on a solution, but there is still no estimated timeline for when the issue might be resolved.

In addition to Ukrainian devs, dozens of asset publishers from Russia and Belarus faced the same problems. On March 30, Unity’s support service shared a list of sanctioned banks the company couldn’t work with anymore. However, payouts don’t work even for developers using non-sanctioned banks (e.g. Tinkoff).

If the problem with payments to Russian and Belarusian publishers can be attributed to sanctions that were imposed on these countries after the start of the war, the situation is different with Ukrainian developers.

Although no financial restrictions were introduced against the country’s banks, local asset creators still couldn’t receive their money. As Ruslan Kudriachenko, who along with his wife makes up the Pirate Parrot development team, told us, all Ukrainian banks are affected equally, so it makes no difference which one to use (PrivatBank, Monobank, etc.).

“Despite the fact that we are not located in any sanctioned region, payments fail, with ‘sanctions’ cited as the reason,” he said, adding, “It was especially bad at the start of the war because the payment was declined when we needed money the most.”

The whole situation is strange in light of Unity’s vocal support for Ukraine and local content creators. In March, the company announced several major initiatives:

Unity stands with the people of Ukraine 🇺🇦

There is still the dedicated Stand with Ukraine page on the store, where Unity highlights and sells assets created by Ukrainian developers. “Unity Asset Store stands with the people of Ukraine, and the 500+ publishers impacted by the invasion of their sovereign state,” the message on the page reads.

The company not only committed to donate 100% of its cut, but also specifically emphasized that “publishers will continue to receive their portion [of revenue].”

So there is a contradiction between Unity’s charitable initiatives and the inability of Ukraine-based developers to properly receive money from their assets that are still sold and promoted on the Asset Store. 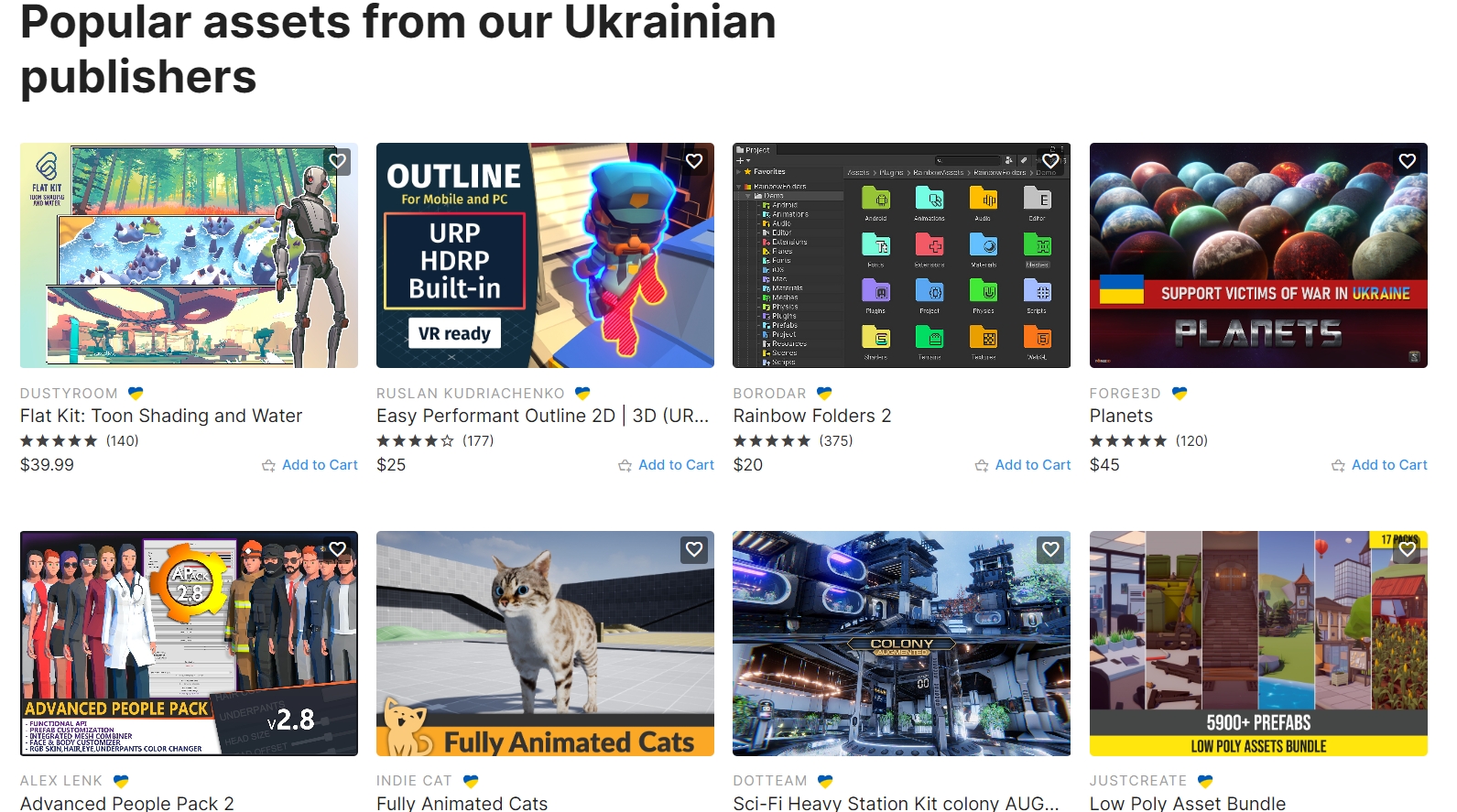 How does the Unity Asset Store payout system work?

Developers don’t receive payouts immediately for each purchase of their assets. Unity collects money, withholds a certain fee (asset makers get 70% of revenue), and then makes payouts on the due date.

The system basically works the same way as Steam, App Store, Google Play, and pretty much any other platform in the market that sells third-party content online.

These methods stopped working correctly for publishers located in the above regions when the war in Ukraine began on February 24, 2022.

How do developers get their payouts now?

In the wake of problems with bank transfers, PayPal might seem like a viable option. However, there is one major issue with it in Ukraine. Although the company expanded its services in the country earlier this year, PayPal still can’t be used for business transfers. People can only get money from friends and family around the world.

Earlier this year, Unity sent an email to some Ukrainian developers, saying that they could now use PayPal to receive money. In fact, the service was still unavailable in the country for international business transfers. “That’s a joke because it’s impossible [to receive payments via PayPal],” Kudriachenko said. “Looks like they wrote it just to show they are doing something.”

As for Russia, PayPal shut down all of its services in the country in March. Belarusian users also can’t receive payments, because the service works there in send-only mode. So this payout method is not suitable for asset publishers in any of these countries.

Many developers are now trying to solve the problem on their own, looking for alternative methods:

Possible root of the problem

Lack of communication and other issues

Despite all the issues with payments, many developers continue to support and improve their assets. They are grateful to Unity for its support and effort put into helping find the solution, but at the same time they are dissatisfied with the lack of proper communication.

The main criticism relates to the inefficiency of the company’s customer support. Some developers say they only get responses once a month, while others complain that Unity simply sends the same messages repeatedly.

“It’s a shame they couldn’t fix it in 6 months,” Kudriachenko noted. “Unity was helpful with organizing all these sales, but not fixing the issue was shocking.”

We also obtained an open letter to Unity management signed by 24 asset creators from Ukraine, Russia, and Belarus. They listed pretty much all the issues mentioned above, urging the company to find the solution asap.

“Each of us keep supporting and improving their assets in order to deliver proper service to the Asset Store customers and keep the cogs running, but this can’t last forever as we need to pay bills and can’t work for free for the half of the year or even more,” the letter reads.

These developers demanded that Unity:

Unity management seems to have ignored the message, with Asset Store’s customer support only promising to quickly respond to all developers who signed the letter. However, the situation, unfortunately, hasn’t changed for the better since then.

How did other platforms deal with payout issues?

In March, Steam sent the following message to game developers: “Due to the current environment, we are unable to send bank payments to Belarus, Russia and Ukraine.” However, Valve resumed payments the very next month by introducing changes to its banking procedures and billing systems.

Epic Games also managed to solve the payment issues. In March, the company stopped all commerce with Russia in its games, but these restrictions didn’t affect developers. Asset makers from Ukraine, Russia, and Belarus can still receive payouts from the Unreal Engine Marketplace.

This is also true for some other big platforms. So the Unity Asset Store’s case is not unique, but it is still unclear whether the company will be able to resume payments anytime soon.