Chris Zukowski: Steam can only promote up to around 500 indie games per year
20:40
Wargaming top manager called a terrorist by KGB Belarus
17:19
AI USE CASE: How a mobile game development studio saved $70K in expenses
27.01
Sensor Tower: Subway Surfers was most downloaded game in Q4 2022, but the Stumble Guys showed fastest growth
26.01
The Day Before loses its page on Steam. Developer cites trademark complaint
25.01
125 games industry professionals from 85 companies attended WN Connect business event in Belgrad
24.01
Blizzard caught up in scandal. Again. This time it is all about ranking its employees
24.01
Cyberpunk 2077 quest director Paweł Sasko on game’s non-linearity: “Players expected more because of the fact how The Witcher 3 is built”
23.01
Key success factors for ZERO Sievert, top-down extraction shooter that generated over $1 million in its first week
23.01
Dragon Age: Dreadwolf production director Mac Walters leaves BioWare after almost 20 years
23.01
All news
Dev Interviews 16.09.2022 17:06

Half Past Yellow on Time on Frog Island, trading with frogs, and creating “adventure for people with ADHD”

Half Past Yellow co-founder and lead designer Max Wrighton has opened up about Time on Frog Island, a colorful adventure game inspired by some Zelda quests. We discussed the title’s trading nature and the vicissitudes of indie game development. 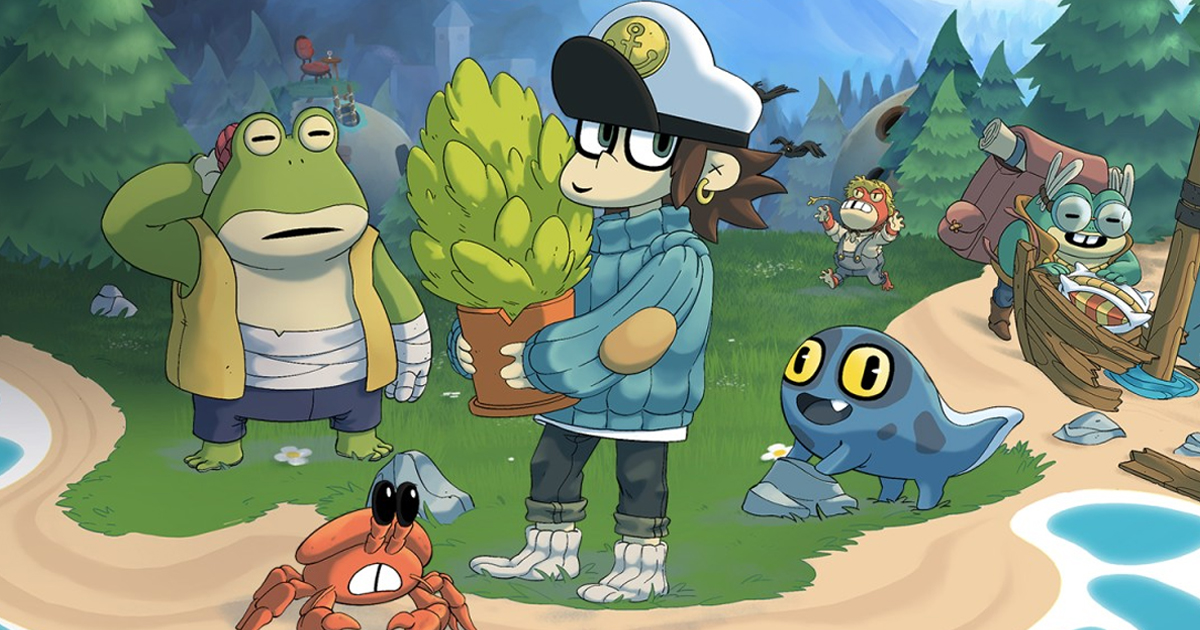 How it all started in Copenhagen

Things got serious when Wrighton started a course at Abertay University, where he studied game design and production management. In 2014, he also attended the European Cross Media Academy (EUCROMA) training program in Copenhagen.

Wrighton started making games with three other guys he met there and ended up forming Half Past Yellow in 2017. The founding team also include art director Casper Petersen, creative director Gianfranco Dbeis, and technical director Remy Stuurwold.

“We were just 4 co-founders working at the studio up until about mid 2021,” Wrighton recalls. “After obtaining publisher funding, we could bring on some team members full time and generally scale the team up.”

Half Past Yellow has grown into a semi-remote team of eight people with members scattered across the globe. The team is now focused on making short-medium length games in different genres.

As Wrighton explains, they want to “bring a sense of quality/seal of approval to any genre that we tackle, and we hope members of our community who enjoy our games are willing to join us on this journey.”

Building a relaxing gameplay loop with trading quests at the forefront

Launched in July 2022, Time on Frog Island is set on a mysterious island inhabited by… frogs, you guessed it! Taking on the role of a sea captain shipwrecked on this land, the player has to interact with these bipedal amphibians to fix the boat.

At its core, Time on Frog Island is an exploration puzzle game described by the team as a “point-and-click adventure for people with ADHD.” “There are a lot of little things to do on the island and a lot of distractions to be found along the way,” Wrighton says.

The overall experience, however, still feels relaxing. The player explores Frog Island by solving different puzzles and trading with frogs. The latter is one of the key elements of the game, so it is not surprising that the team took some ideas from certain fetch quests from other titles.

“Chains of trades like the Biggoron Sword quest in The Legends of Zelda: Ocarina of Time, or the One Small Favor quest in RuneScape inspired us to take an extra step and create a game with multiple criss-cross chains,” Wrighton says.

“We really want players to learn the lay of the land, while experimenting with different items and solutions,” Wrighton explains. “Part of the fun of the game for us is the memory aspect of how the island fits together, which frogs need which items, interesting places or special looking items that could be useful. 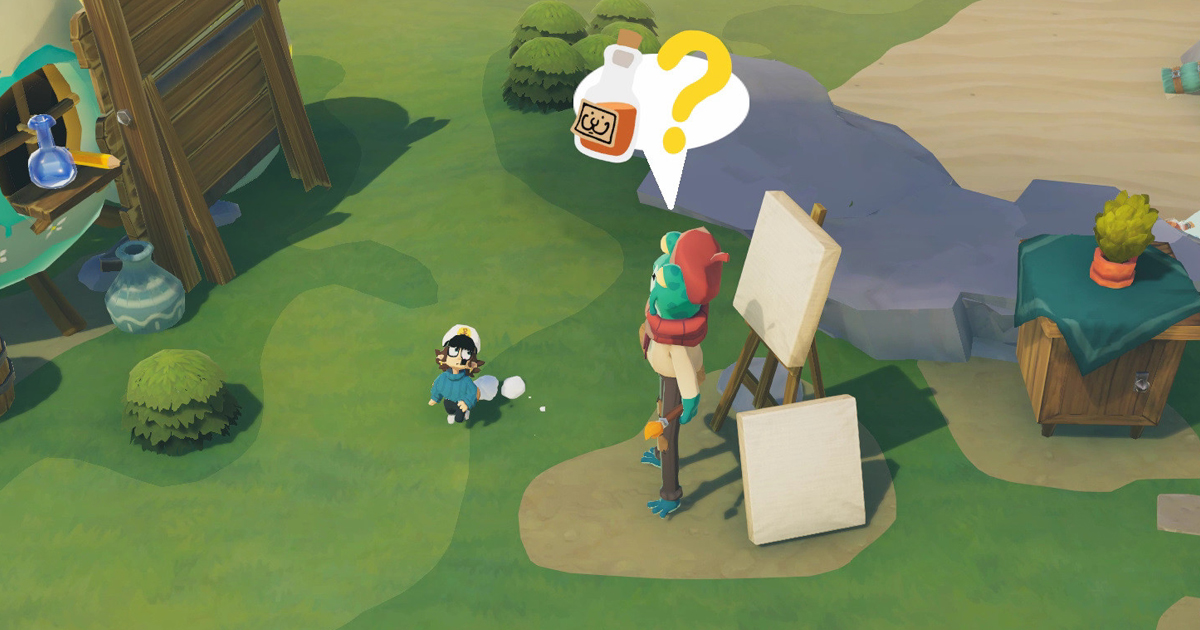 How to make a story without dialogues?

“We aren’t narrative designers so the stories in our games tend to be quite light in terms of size and scope,” Wrighton says. And Time on Frog Island is not a narrative-driven game either.

However, the team still had to make the player believe in this world and encourage them to explore the island’s secrets and understand its froggy inhabitants. So it was quite a challenge.

Half Past Yellow eventually came up with the pictogram dialogue system. Neither the captain, nor the frogs don’t speak in the usual sense. Instead, they communicate through bubbles with different pictures, which should indicate what the exact character needs at the moment.

“It was still difficult to tie everything together for the different puzzles,” Wrighton notes. “We needed to make sure that the pictograms were understandable, and that the player had the right amount of information to begin their search.”

Like many other indie games these days, Time on Frog Island is built with Unity. The studio also used Fmod and Reaper for the sound, and Blender, Krita, Photoshop, and 3DCoat for the visuals.

It took Half Past Yellow a little over two years to finish the game. “When we were starting the studio, we did have ups and downs when it came to salaries, funding, client projects, etc.,” Wrighton recalls.

However, Half Past Yellow has always tried to maintain the team’s work-life balance. Although Wrighton has never experienced a severe burnout, he heard about some “horror stories” about it.

“As founders, we actively avoid crunching for deadlines (and we are mostly successful), always opting to reshape project scope when we see something as unattainable,” Wrighton says. “This has made it easy to build an acceptable company culture as we have scaled up.”

Although the production process was smooth for the most part, the studio was running low on financing in the first year. That’s why they created a vertical slice of the game to pitch it to publishers and eventually signed with Merge Games.

The company helped the team with funding, marketing, and QA to finish Time on Frog Island. On top of that, Mege Games also opened new opportunities for Half Past Yellow, thanks to its relationship with platform holders like Steam, Microsoft, Nintendo, and Sony.

“I think that there are many directions a game studio can take to success, and publishers play a vital role in game production,” Wrighton says. “Negotiating a good contract and planning ahead is key.”

At launch, Time on Frog Island received positive reviews from Steam players and was covered by big gaming outlets like PC Gamer. Without revealing numbers, Wrighton says the game “smashed out sales expectations” in the first month.

The good reception allowed Half Past Yellow to quietly work on some quality-of-life improvements and bug fixes. “Maybe, we will return to the ‘Tim on’ universe at a later date,” Wrighton hints, as the team is now moving on to their next original single-player project.