How to create Red Alert-inspired game assets by fine-tuning Stable Diffusion
18:42
Member of CD Projekt’s board of directors sells 50,000 shares for almost $1.5 million
16:25
Persona 5 Royal reaches 3.3 million units sold, with total sales surpassing 8 million copies
14:56
Apex Legends Mobile becomes best game of 2022 for both Android and iOS
12:26
Todd Howard on making games playable for 20 years: “It changes the way you think about how you architect them from the get-go”
30.11
Valve removes SimFabric games from Steam over fake reviews allegations
30.11
Loot boxes cause financial and emotional harm to kids due to gambling-like design techniques, UK study says
30.11
Median indie game earnings on Steam barely exceed $1,000 lifetime
29.11
“It should serve as a lesson in how not to do business”: what does the end of Stadia mean for cloud gaming?
29.11
Report: Microsoft ready to make concessions in Activision acquisition, including licensing deal with Sony
29.11
All news
Dev Interviews 05.08.2022 17:04

FlyinDogs on The Tales of Bayun, narrative adventure game on steroids set in gloomy world of Slavic folk tales

FlyinDogs is a Georgia-based team working on The Tales of Bayun, a narrative adventure game inspired by the Slavic folklore. The studio’s co-founder Ilia Maksimenko has told us about crafting a colorful yet gloomy fantasy world and diving into the sea of indie development. 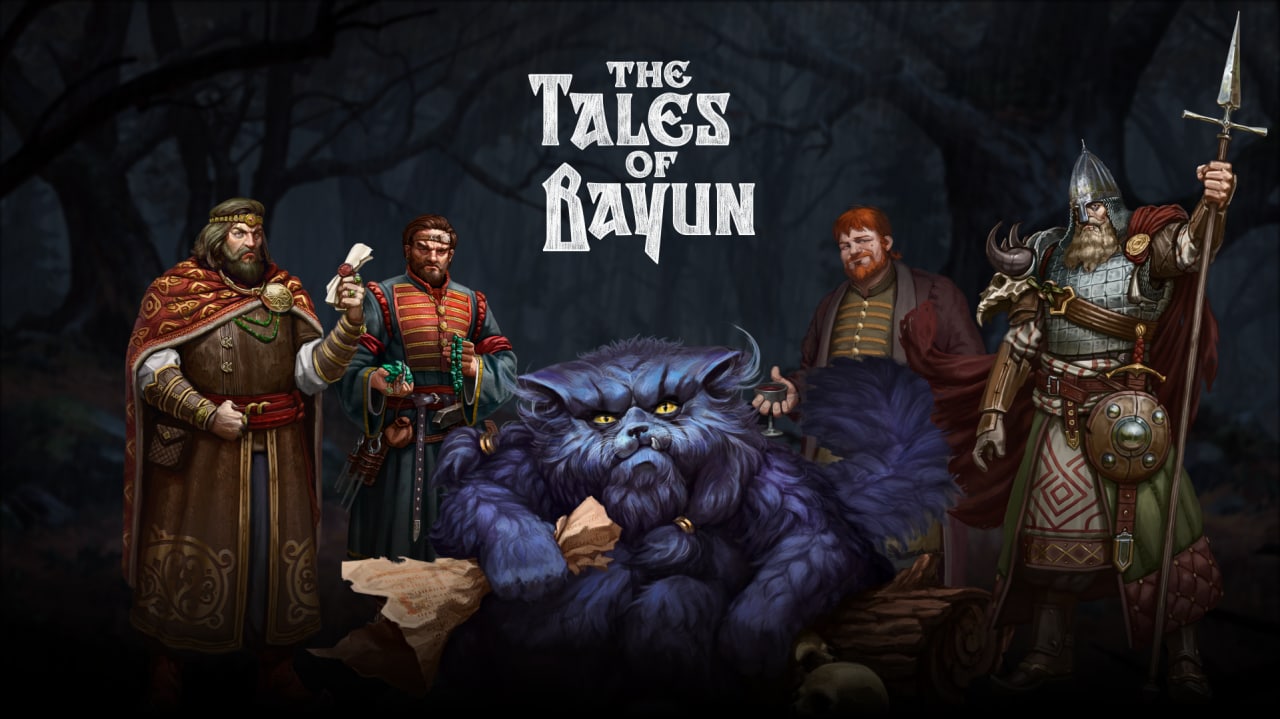 From digital marketing to game development

The Tales of Bayun is the first gaming project for Maksimenko and his partner Sergei Baulin. Prior to that, they worked in web marketing for five years, and Maksimenko also had his own digital agency.

Although this job brought stability and money, he didn’t feel satisfied. So about a year and a half ago, Maksimenko realized that he no longer wanted to make websites. He eventually left the digital agency and founded FlyinDogs. 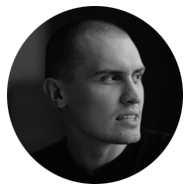 “We knew in advance that making games is very expensive and difficult, not to mention that risks are extremely high,” Maksimenko says. “We didn’t have rose-colored glasses. We understood perfectly — and we still realize it today — that we could lose all the money.”

So the team chose a relatively non-resource-intensive genre from those they personally loved, calculated the budget, and launched development.

FlyinDogs doesn’t expect to earn money off The Tales of Bayun, hoping to at least recoup the costs. Instead, Maksimenko pursues three main goals:

“I personally also want to be proud of the game,” Maksimenko notes. “I don’t want to look back and realize that I spent my whole life on routine or worked on mediocre projects.” 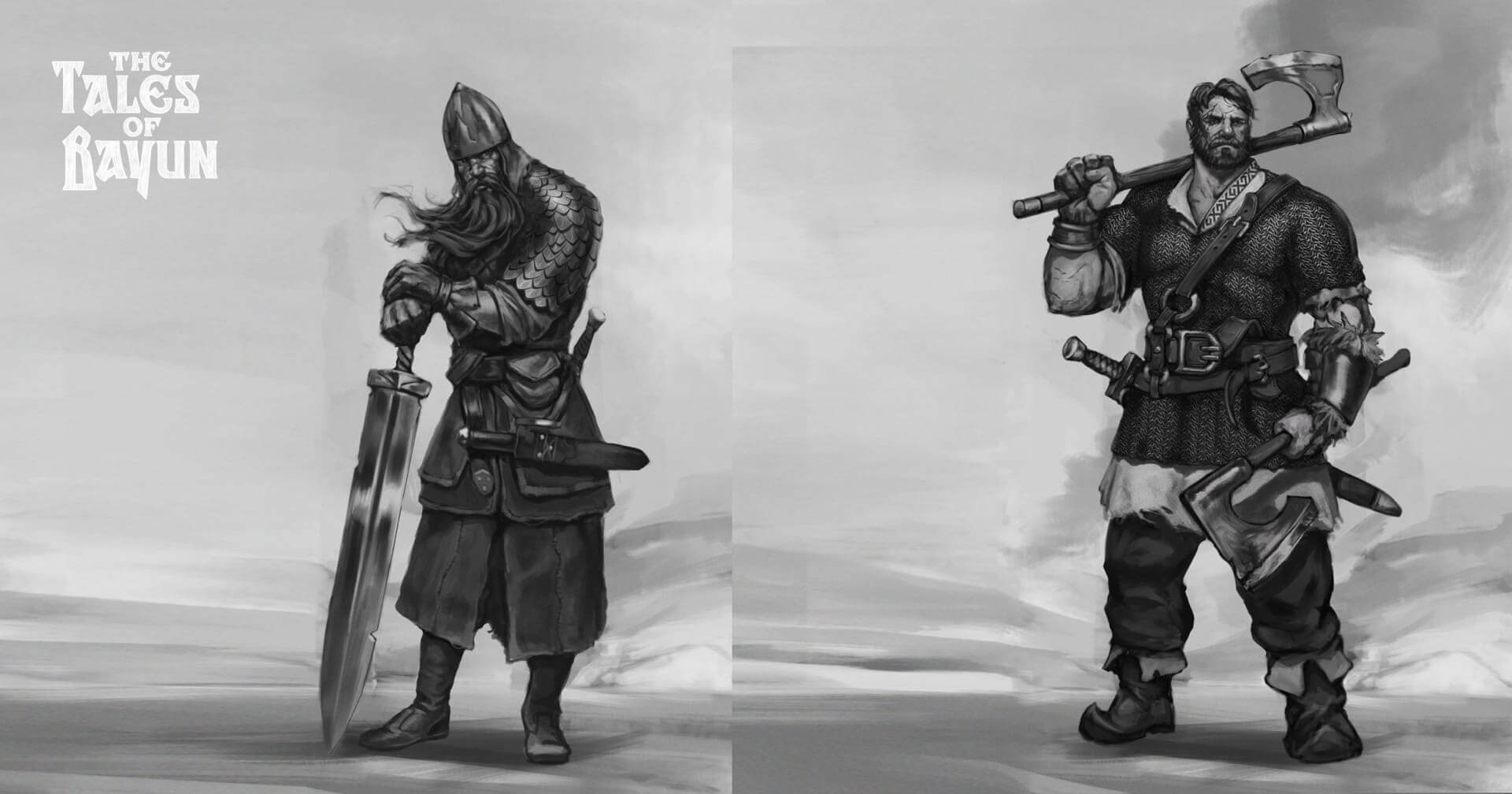 Building up the team

Maksimenko and Baulin did all the hiring work. They found the first people through their friends. Overall, they reviewed 120 CVs, conducted 40 interviews, checked 20 test tasks, and hired 8 people to the core team.

It is safe to say that our first introduction to game development was through hiring. It left a very good impression. Unlike the niche I used to work in, you only need a couple of acquaintances in the games industry for people to start sharing information with you and help you find staff.

The FlyinDogs team currently consists of 14 people with seven to nine years of experience in the industry on average. Nine of them, along with Maksimenko, are working on the game full-time, with the rest of them being partially occupied. 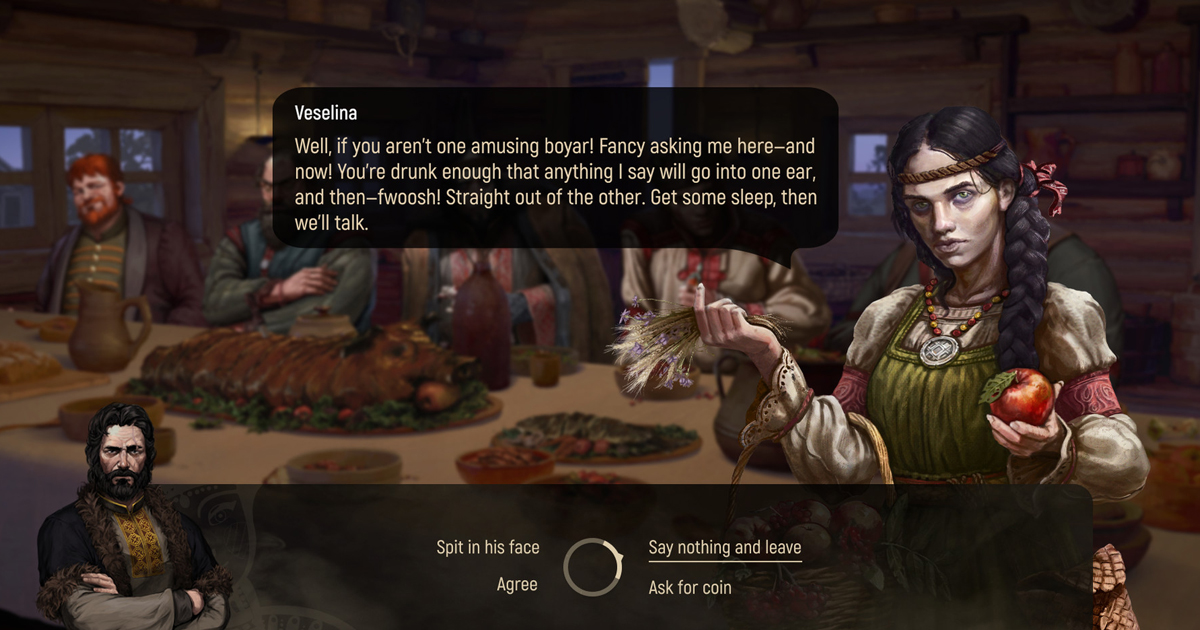 FlyinDogs chose Slavic mythology because they think that this setting, for all its richness, is extremely underrated.

“It is very bright and textured, so you won’t confuse it with any other setting,” Maksimenko says. “Characters here vary from chorts (demons) to robust men. The surroundings include cabins and meadows. And there is always a place for cruelty and fatalism.”

The team didn’t want to just use ready-made fairy tales, so they came up with their own setting. Maksimenko describes it as a “fantasy inspired by Slavic mythology and fairy tales.”

FlyinDogs created Storona (The Side), a flat world resting on the backs of three demon bears. It is inhabited by different creatures from pagan folk tales and legends, including three-headed dragon Gorynych, Malachite Maid, and Svarog.

The creature in the game’s title is Bayun, a giant man-eating cat with a magic voice that can put wanderers to sleep. He uses his iron claws to kill people who are not strong enough to resist his magic. However, Bayun’s tales and singing can cure all illnesses of those who can somehow catch him.

In The Tales of Bayun, he is the one who will guide players through this world.

Storona is not your typical fairy world. This is a rather cruel and gloomy world, where people struggle to survive, and folklore characters, such as Bayun the Cat, have very dubious moral values. 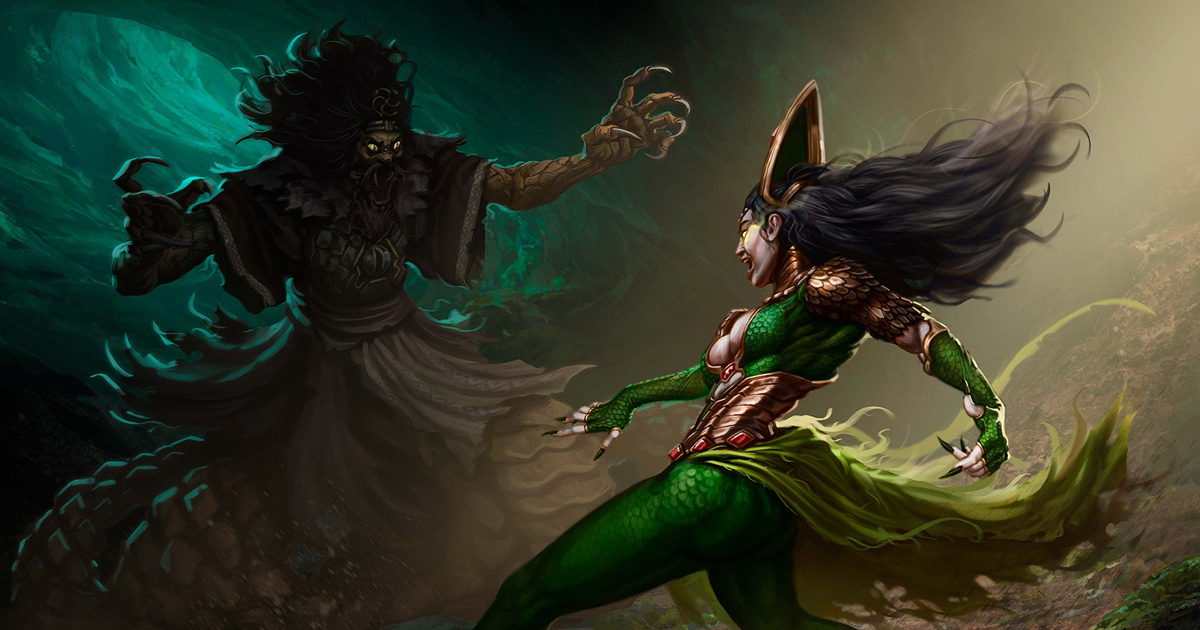 A narrative adventure with endless shades of gray

Since The Tales of Bayun is FlyinDogs’ debut title, they didn’t want to try to create something too large and ambitious. So the team decided to make a narrative-driven adventure game.

The studio then slightly moved away from the original concept, adding elements of classic adventure games and some role-playing mechanics to make gameplay more diverse.

As a result, we made a narrative adventure game on steroids, where the player regularly has to make unobvious and morally difficult choices. Often you choose between many shades of gray rather than just black and white.

Maksimenko compares the game’s episodic structure to a TV series, with each episode having from five to seven endings. He also notes that The Tales of Bayun is not a visual novel despite all the similarities with this genre.

“We didn’t want the player to scroll through endless chunks of text,” Maksimenko says. “Our goal was to create a colorful adventure that can be completed in a couple of evenings but where almost every line, every passage, and every choice would make sense.” 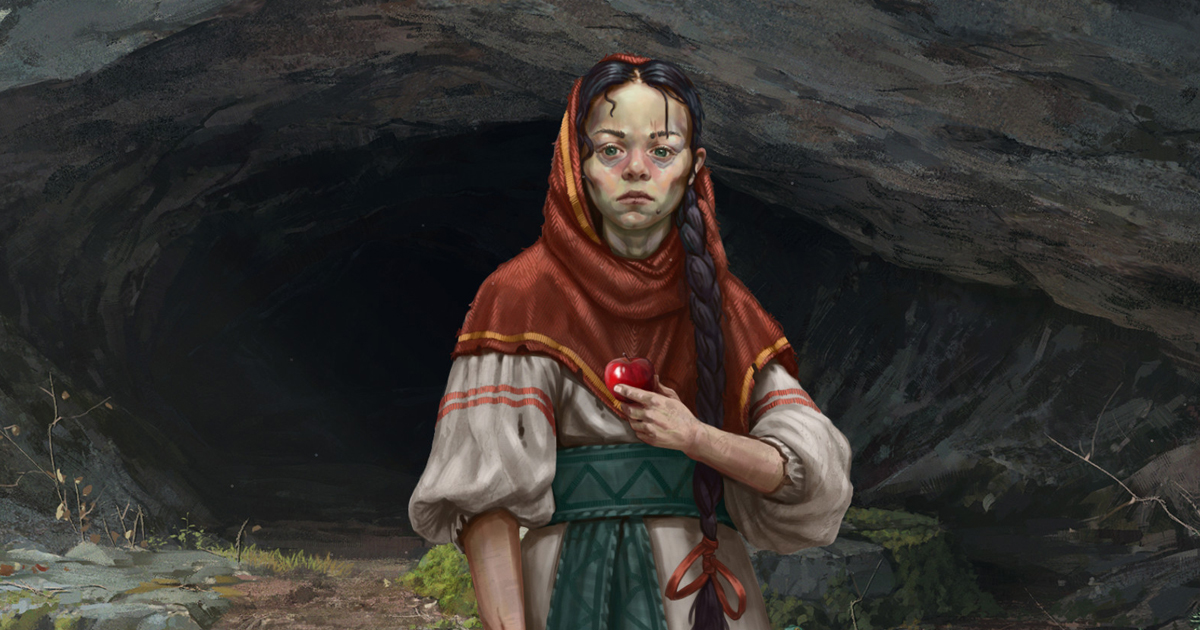 Setting business goals and looking for a publisher

At launch, players will get access to the first two episodes of The Tales of Bayun. If people like the game, FlyinDogs will release more episodes that can be purchased as DLCs.

“It is worth noting that each episode is a complete story,” Maksimenko explains. “So even if the game doesn’t succeed [commercially], the story won’t be cut in the middle. In any case, the player will be able to spend a good time with the game and find out how everything ended.”

FlyinDogs says that selling 50k copies would be enough to consider the game commercially successful. If the team misses the target, they will still start developing a new title and seeking funding.

Right now, FlyinDogs is negotiating with publishers. However, a game like The Tales of Bayun is a double risk for a Western company, taking into account a strange setting and a relatively unpopular genre.

Slavic setting still seems exotic to Western audiences. Players lack an understanding of its scale and richness. They are aware of who Baba Yaga is, and that’s all, although they know The Witcher games.

The Tales of Bayun is expected to come out in the fourth quarter of 2022 on Steam. Maksimenko notes that even if they don’t make a publishing deal, they are ready to self-launch the game.