How to create Red Alert-inspired game assets by fine-tuning Stable Diffusion
18:42
Member of CD Projekt’s board of directors sells 50,000 shares for almost $1.5 million
16:25
Persona 5 Royal reaches 3.3 million units sold, with total sales surpassing 8 million copies
14:56
Apex Legends Mobile becomes best game of 2022 for both Android and iOS
12:26
Todd Howard on making games playable for 20 years: “It changes the way you think about how you architect them from the get-go”
30.11
Valve removes SimFabric games from Steam over fake reviews allegations
30.11
Loot boxes cause financial and emotional harm to kids due to gambling-like design techniques, UK study says
30.11
Median indie game earnings on Steam barely exceed $1,000 lifetime
29.11
“It should serve as a lesson in how not to do business”: what does the end of Stadia mean for cloud gaming?
29.11
Report: Microsoft ready to make concessions in Activision acquisition, including licensing deal with Sony
29.11
All news
Dev Interviews 01.07.2022 17:06

Distilled Gaming on its fighting card game Death or Glory: “The most challenging aspect is mental”

For this week’s indiedev interview, we spoke with Hong Kong-based team Distilled Gaming. It is now working on Death or Glory, a bold attempt to mix the CCG and fighting genres. The studio’s founder and game designer Roy Loh opened up about the game’s development, monetization, and being inspired by both MTG and Street Fighter. Distilled Gaming is a small team of five founded by Roy Loh. He describes his studio as a “bunch of gamers that want to create something for ourselves and everyone else to enjoy.”

Loh’s journey started with classic card games. He used to play Magic the Gathering during his school days and was captivated by the strategy and mind games between players.

The love for fighting games and martial arts was another thing that shaped his tastes and preferences.

“The Hong Kong Kung Fu comic scene also had a huge influence on me,” Loh says. “Believing at the highest level that both activities are essentially sequences of play and counter play, I decided to fuse the two genres together, creating a CCG that is about fighting but emphasizing the tactical mind-game nature of combat.”

It’s all about plays and counter plays

With Death or Glory, Loh tried to take the best out of the MTG and Street Fighter worlds, the two games that were his biggest inspirations. The idea was to blur the line between CCG and fighting genres.

“We translated this into a unique system where control of combat switches back and forth between two players depending on play and counter play,” Loh says. “Every move can be countered and a reversal can be stopped. This results in a very dynamic playstyle where every card being played matters, either with a massive combo potential or being blocked and giving the opponent the initiative.” 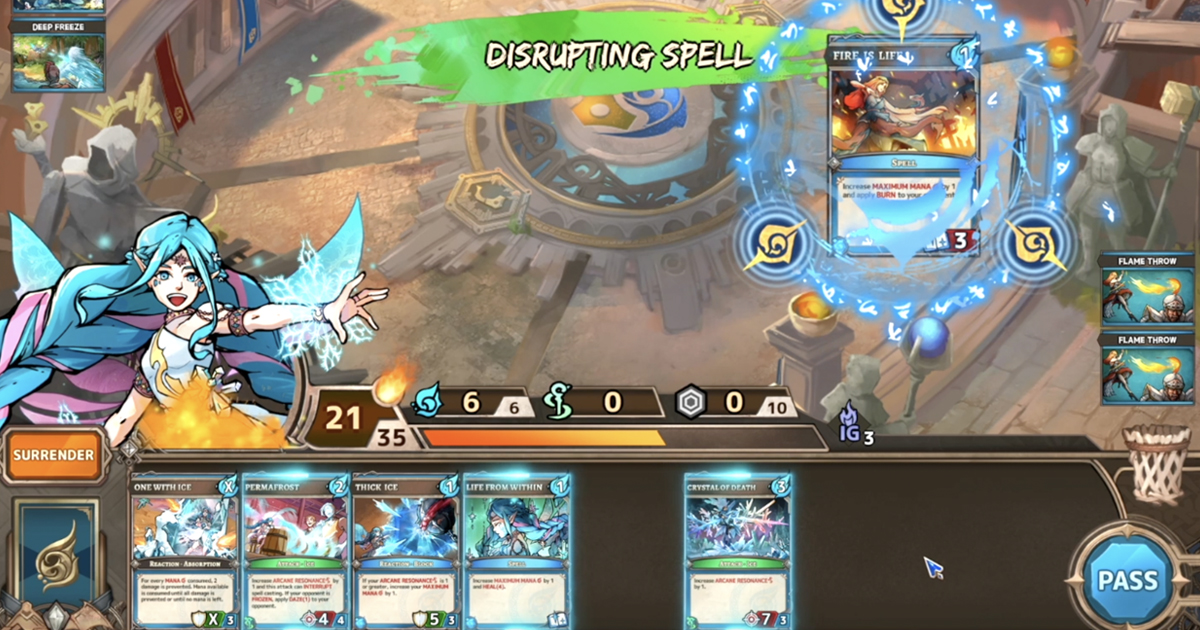 Another distinctive feature of Death or Glory is what Distilled Gaming calls a “Universal Combat System” (UCS). It allows the team to fit every fantasy or sci-fi trope imaginable into the game, with characters ranging from battle mechs and ninjas to vampires and paladins all facing each other in the battleground.

“For example, a werewolf might go berserk, resulting in a sudden burst of attacks, while a mage may need to gradually build its mana,” Loh explains. “These systems are tailor-made to express the feel of different combatants.”

Distilled Gaming wants to make their game character-based and character mechanic-driven, giving every character their own deck, battle style, and unique cards specific to them.

Here’s a behind-the-scenes look at how we made our fear effect work in-game, using @YoYoGames’ #GameMakerStudio. 😎#DeathOrGlory #gamedev #indiedev pic.twitter.com/D6e2q0fd2c

First deep dive into gamedev and managing the small studio

Loh started developing Death or Glory in 2017, working on core mechanics, game design, and early prototypes for three years. This was his first “deep dive into making games,” so he had to learn everything on the go, including programming.

Death or Glory is built with GameMaker, which Loh describes as a user-friendly game engine. “The multi-platform nature of it means our aspiration to publish on different platforms would be relatively easy,” he notes.

In 2020, Loh was able to add more people to the team, including artists, programmers, and marketers. The studio is still small, so they have a flat structure, with everyone getting a voice on the way to fulfill their shared vision. 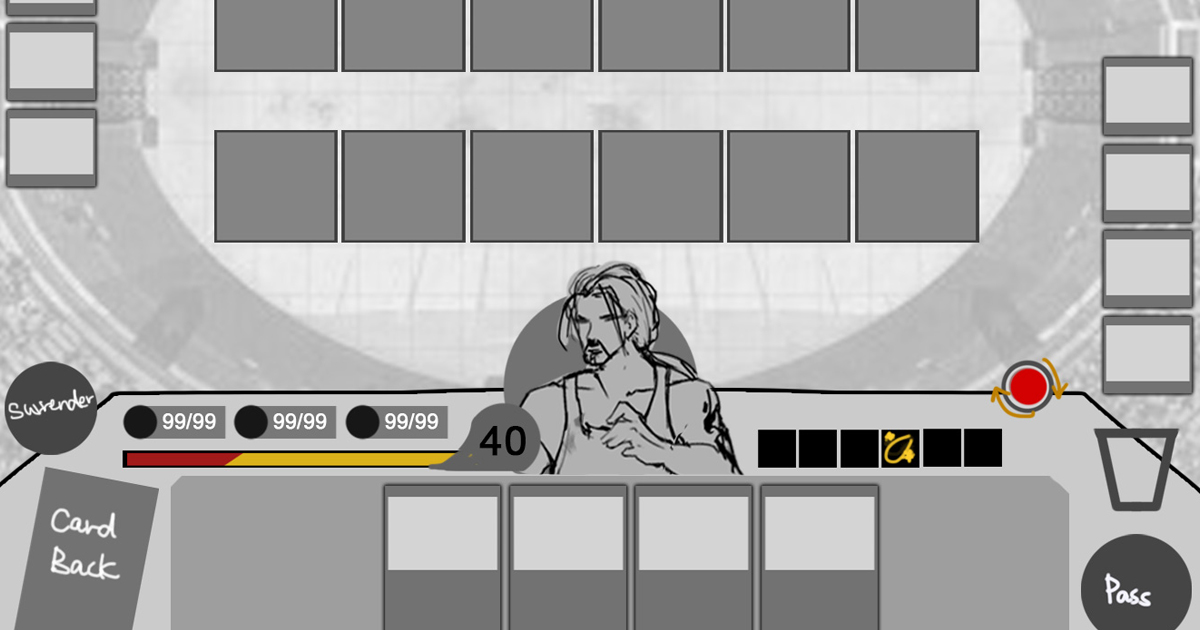 One of the drafts of Death or Glory’s UI

“We work experimentally and abide by the continuous software development philosophy, which allows us to always be able to improve and implement feedback from internal or external sources,” Loh explains. “We value flexibility above all, as we feel that this is what will eventually allow our game to be successful in the long run.”

According to Loh, the biggest challenge so far has been learning to develop the game within physical and time constraints. This means sometimes arguing with each other and cutting out things that someone on the team might be passionate about.

“The most challenging aspect is mental,” Loh notes. “We have ripped out a whole month of work because we were not happy with the outcome. Moments like these are very painful for the creator. In short, to get to where we are has taken a long time. Just the design phase alone, without any art support, has taken three years.”

To cope with the stress and prevent burnout, Loh tries to have the team work on a predictable schedule with very little overtime. He realizes that people need to relax and keep their minds fresh to be creative.

“As a result, there must be trade-offs in terms of managing the project,” Loh says. “Being able to deliver the game on time, with maximum stability and with a growing feature list is simply not realistic. More likely than not, we have to pace our delivery and remind ourselves we are running a marathon and not a sprint.” 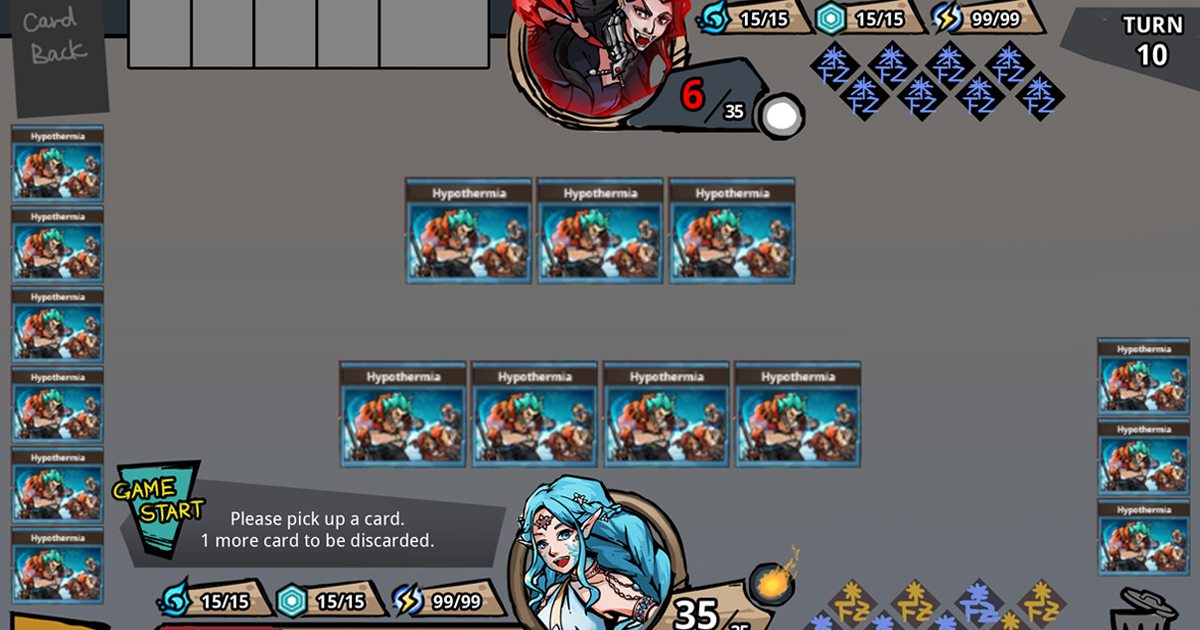 One of the early templates

Since Death or Glory is a free-to-play game, Distilled Gaming had to think about monetization. When asked about whether in-app purchases would give paying users some gameplay advantages, Loh says that online matches are designed to be fair for all types of players.

The team wanted to make Death or Glory friendly for new and casual players, unlike a lot of CCG games that might be hard to get into. “When you see a deck being played online against you, it is a non-trivial task to buy and collect the necessary cards and components in order to replicate that play style,” Loh says of what he believes is one of the problems with the genre. “This is attributable to the nature of random booster packs, resulting in a large upfront cost of buying the necessary cards before you can even enjoy the game.”

Distilled Gaming chose its own path. At its core, the monetization model of Death or Glory is built around selling characters. Each of them has a unique deck and is meant to be balanced against the others.

“Owning just a single character would not be an inherent disadvantage,” Loh explains. “On the other hand, buying multiple characters would enhance the experience by allowing different playstyles. In either case, a battle between two players online is a fair fight.”

Players can pick up any character after completing the tutorial. They will be able to buy additional characters in the game or earn them for free at the cost of longer playtime by completing challenges and daily quests.

Other than that, Death or Glory will have some customization options like skins, alternate arts, and other cosmetics. But Distilled Gaming assures that there will be no RNG loot boxes or booster packs. 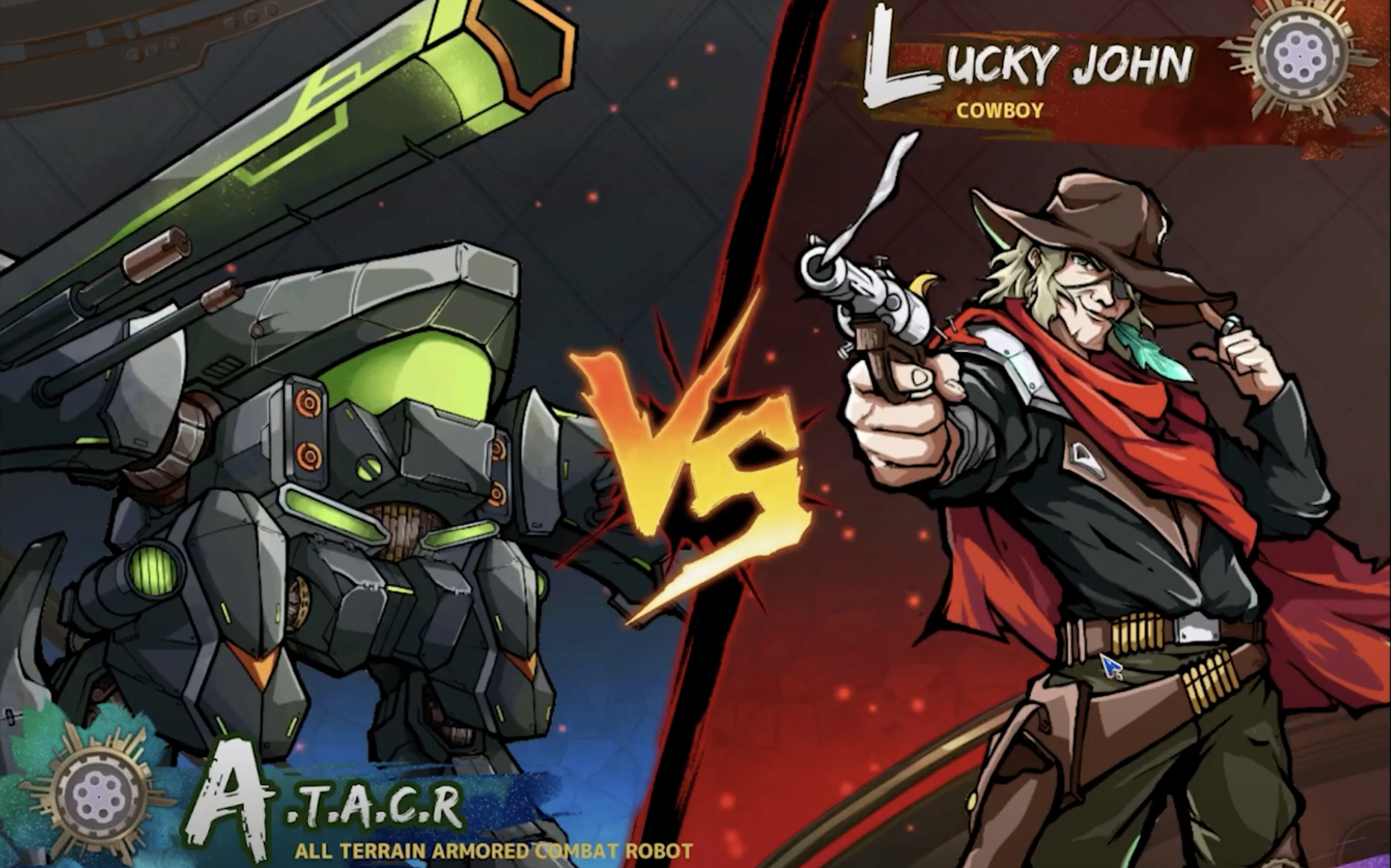 Distilled Gaming recently took part in the Steam Next Fest, which Loh says was a huge success for them. “Our viewer count and the awareness we attracted was on a whole different level than what we had imagined,” he notes. “Our wishlist numbers grew tremendously during the event and are still growing since Spring.”

This helped the team receive some quality feedback from players, which resulted in changing some features and things within the game: “It kickstarted many initiatives such as a revamp of the tutorial and adding a preview system, fine-tuned our UI designs and the feedback from players informed us on the type of path we should take moving forward.” 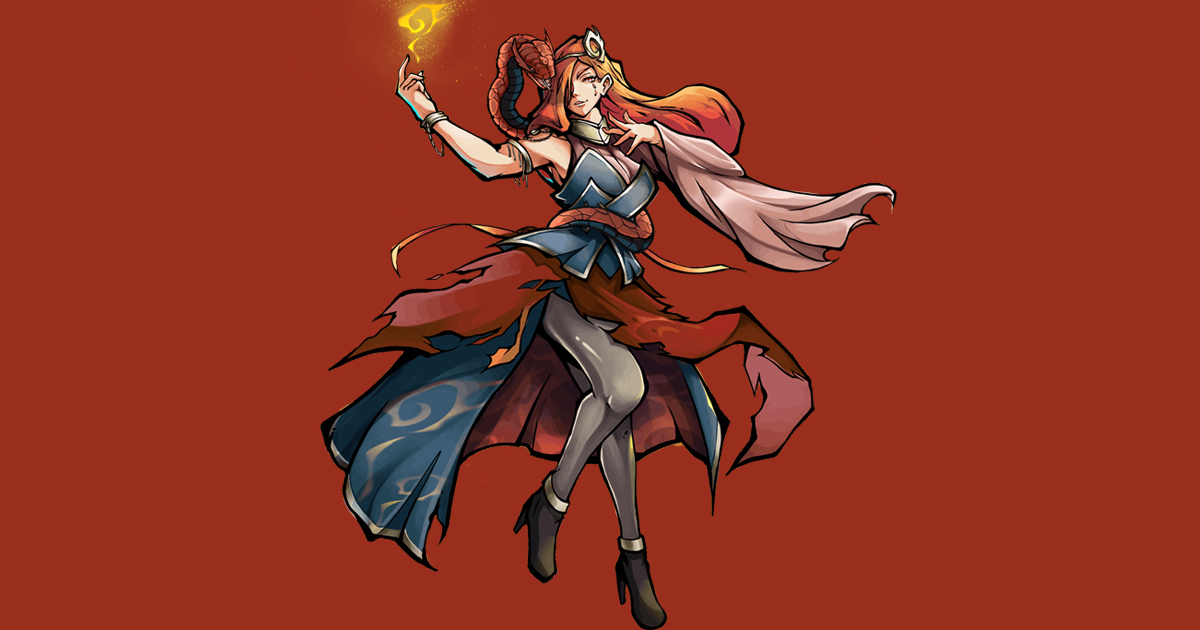 Distilled Gaming has already been approached by several publishers, but the studio is sticking to the idea of self-publishing for now. It doesn’t mean that Loh won’t make a deal eventually, but he wants a potential partner to bring new experience to the table. This might be a publisher’s “familiarity with local markets or marketing access to a rabid fanbase.”

Death or Glory is expected to come out this summer on Steam, with iOS and Android versions arriving later. Distilled Gaming already has plans for post-launch support, including new game modes, cards, and bosses. The team also wants to introduce a new character every month, so the meta keeps evolving.

“We are excited to explore story modes that should bring our game world to life,” Loh says. “We even have ideas that totally change up the gameplay experience that we are not ready to disclose at the moment. Do stay tuned for further updates.”