Tenjin and GameAnalytics release Q4 Hyper-Casual Games Benchmark Report
01.02
Chris Zukowski: Steam can only promote up to around 500 indie games per year
30.01
Wargaming top manager called a terrorist by KGB Belarus
30.01
AI USE CASE: How a mobile game development studio saved $70K in expenses
27.01
Sensor Tower: Subway Surfers was most downloaded game in Q4 2022, but the Stumble Guys showed fastest growth
26.01
The Day Before loses its page on Steam. Developer cites trademark complaint
25.01
125 games industry professionals from 85 companies attended WN Connect business event in Belgrad
24.01
Blizzard caught up in scandal. Again. This time it is all about ranking its employees
24.01
Cyberpunk 2077 quest director Paweł Sasko on game’s non-linearity: “Players expected more because of the fact how The Witcher 3 is built”
23.01
Key success factors for ZERO Sievert, top-down extraction shooter that generated over $1 million in its first week
23.01
All news
Industry News 12.01.2022 18:20

Worlde, a puzzle game that got massively popular online, has spawned numerous clones. One of them called Worlde — The App even managed to generate 12,000 downloads before Apple apparently removed it from the App Store. 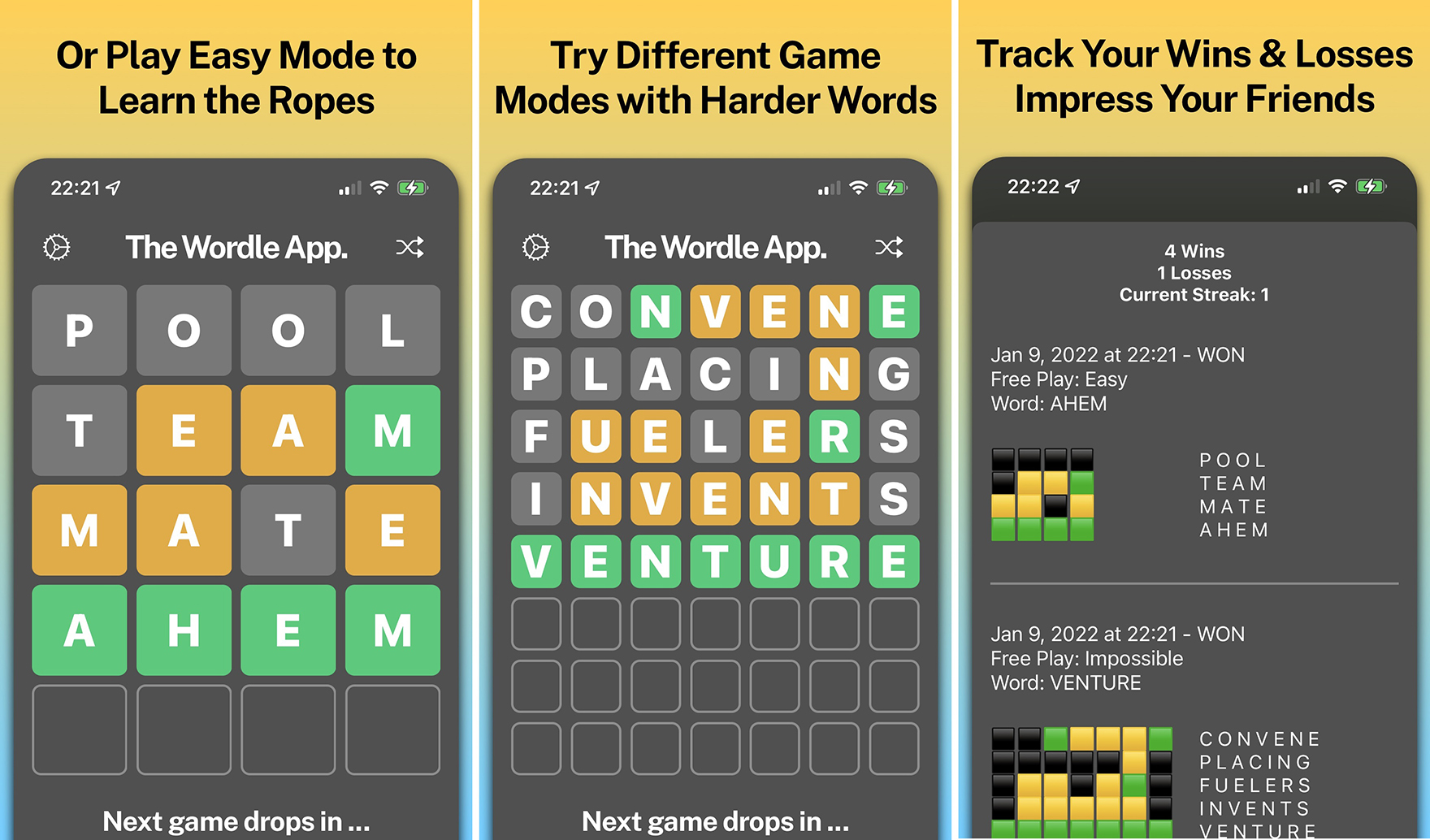 In case you have been offline for the past few weeks, Worlde is a browser-based puzzle game developed by Josh Wardle. It was released in October but started to get popular by the end of the year among Twitter users.

In Wordle, you have six chances to guess a five-letter word. The game marks each letter with different colors after each try. Green means that the letter is in the right position, yellow means that the word contains it but should be placed in a different position, and grey means that the answer doesn’t have it at all.

Considering that Wordle doesn’t have an official mobile app, app stores were quickly flooded with ripoffs. On January 10, developer Zack Shakke wrote on Twitter that he loved Wardle’s game so much that he decided to make his own version for iOS called Wordle — The App, which copies the original’s title UI, mechanics, and visual style.

Shakke’s version, however, had a “twist.” Players could guess not only five-letter words, but words that contain four, six, and seven letters. They could also play with unlimited attempts by paying $30 for a premium version.

Wordle — The App started generating buzz almost immediately. It reached 12,000 downloads and became the #28 word game on the App Store.

This is absurd. 450 trials at 1am last night, now at 950 and getting a new ones every minute. 12K downloads, rank #28 word game, and #4 result for "wordle" in the App Store. We're going to the fucking moon. pic.twitter.com/fE7fsgYVJC

However, this clone received a lot of criticism online. “There have been games with similar mechanics dating back at least to the 19th century — the 1980s game show Lingo was far from the first — but this guy plagiarized the name and interface from Wordle as a naked cash grab,” Andy Baio from Skittish noted on Twitter.

The developer himself tried to justify his actions by saying that Wordle was a ripoff of another game (Lingo). He also noted that Josh Wardle hasn’t trademarked the title.

Here were my calculations:
a) Wordle is a ripoff of another game
b) Wordle the word isn't trademarked and there's a bunch of other unrelated word apps named the same thing
c) Wow, I'll hack together something on the weekend and see if I can make a buck

Shakke’s sudden success didn’t last long as Apple started to pull down Wordle clones from the App Store. According to The Verge, several games, including What Word — Wordle and Wordle — Daily Word Game, disappeared from the store within an hour.