Steam Deck, a new handheld PC from Valve, drew a lot of attention from the games industry professionals. People are now making memes, comparing the device with Nintendo Switch, and praising its concept and hardware. However, the question is whether it will be able to compete in the market? 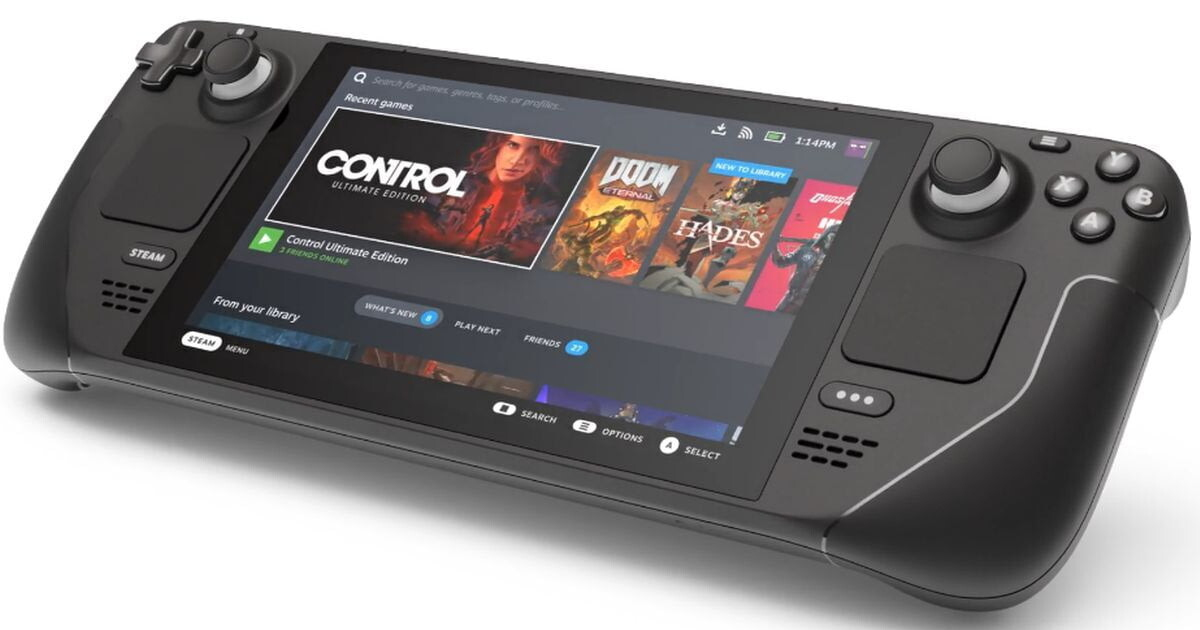 Valve announced Steam Deck on July 15. Its base versions will cost $399 and will let you play PC games on the go, all thanks to its custom AMD APU and 16 GBs of RAM. More information can be found on its official Steam page or in a preview from IGN.

Most people were really excited to see a handheld console that will be able to run AAA games like Star Wars Jedi: Fallen Order.

Some users even started to dream about playing Red Dead Redemption 2 on a plane. While it would be very neat indeed, it might be overly optimistic, considering that Valve hasn’t shown how Rockstar’s hit will run on Steam Deck.

In December, we’ll be able to play RDR2 in a plane#SteamDeck pic.twitter.com/ZI5xHJgpoH

Other people were impressed with an opportunity to play first-party Xbox and PlayStation games natively and without streaming. “Forza Horizon, Halo, Sea of Thieves, Days Gone, Horizon Zero Dawn, etc. all on the go on one device. That’s pretty dang cool,” analyst Benji-Sales wrote on Twitter.

He also shared some statistics related to the announcement of Steam Deck. At the moment of writing, a video clip about the console on Steam’s official Twitter account has reached 5 million views. The device is still trending on social media, generating over 100 thousand tweets. So the interest is pretty much there.

Even Epic Games CEO Tim Sweeney praised Steam Deck, highlighting the opportunity to install third-party stores on the device (Epic Games Store, maybe?). “Amazing move by Valve!” he wrote. “A handheld PC/console hybrid running the SteamOS fork of Arch Linux, and it’s an open platform where users are free to install software or their choosing – including Windows and other stores.”

Amazing move by Valve! A handheld PC/console hybrid running the SteamOS fork of Arch Linux, and it’s an open platform where users are free to install software or their choosing – including Windows and other stores. https://t.co/jf5TWUWGP5

However, discoverability expert Simon Carless found the EGS claims a little bit confusing. In his latest newsletter, he noted that while you can install any software on Steam Deck, Epic Games Store has no Linux support. So there might be some performance issues.

According to Niko Partners senior analyst Daniel Ahmad, portable PCs always had three major problems: providing enough power to run PC titles on the go, finding the right price, and monetizing beyond the hardware itself.

And it seems like on the paper Valve managed to solve all these issues. Steam Deck is cheaper than most similar devices like GPD Win, and it also has powerful hardware and an open system. However, it’s still unclear whether handheld PCs will be able to break out of their niche.

In terms of evolution? Maybe. But it’s not in other aspects just yet.

Valve has combined various projects into one that extends the PC gaming ecosystem.

For a lot of users, a large Steam library of games has become the biggest selling point. “It is without a doubt the largest day-1 library for a dedicated gaming device,” Ahmad wrote.

Jason Schreier also agreed with this point, noting that a “Switch for Steam games” could really become a game-changer. “Steam Deck skeptics might be undervaluing the huge audience of people who play most games portably (dad of toddler here!)” he wrote. “For years every indie game announcement has been met with ‘When is it coming to Switch?’ If this thing feels great (big if), nobody needs to ask that anymore.”

Of course, people on the Internet are now comparing Steam Deck to Nintendo Switch, which is currently the only major handheld console in the market. Some users even joked that Valve’s device is Switch Pro everyone has been waiting for.

Everyone: We want a better version of the Switch!
Nintendo: Here’s a slightly bigger screen.
Valve: Hold my beer.#SteamDeck pic.twitter.com/VGoDq7WiPN

A lot of players also started to make memes about Valve’s handheld PC. For example, one user wrote that Todd Howard will have a new device to sell Skyrim on. Other people also joked about Half-Life 3 being confirmed because Steam Deck will have three versions.

Todd Howard when he realizes Skyrim would already be on the #SteamDeck: pic.twitter.com/Pjkuhh0ENl

Someone even compared Steam Deck’s size with PS Vita. It seems that Valve’s device is big enough to fit almost two handheld consoles from Sony inside.

The Steam Deck is so big you can almost fit two PS Vitas inside!#SteamDeck #PSVita pic.twitter.com/WYptfO4q9c

Steam Deck’s size was one of the things that left a few people disappointed. Some players assumed that it will be too big and heavy for portable gaming. However, Tom Marks from IGN tried to dispel skepticism. “But when I actually held the thing, it feels shockingly natural and comfy. This is not a Steam Controller repeat where ‘I swear you just have to get used to it,’” he wrote.

Despite some skepticism, it looks like Valve managed to get thousands of people hyped about Steam Deck. The main question is if it will become a hit and an affordable way to enter PC gaming or become just a niche device for enthusiasts? Valve will also have to produce enough units, which might be a difficult thing to do, considering the shortage of other devices in the market.