Tenjin and GameAnalytics release Q4 Hyper-Casual Games Benchmark Report
01.02
Chris Zukowski: Steam can only promote up to around 500 indie games per year
30.01
Wargaming top manager called a terrorist by KGB Belarus
30.01
AI USE CASE: How a mobile game development studio saved $70K in expenses
27.01
Sensor Tower: Subway Surfers was most downloaded game in Q4 2022, but the Stumble Guys showed fastest growth
26.01
The Day Before loses its page on Steam. Developer cites trademark complaint
25.01
125 games industry professionals from 85 companies attended WN Connect business event in Belgrad
24.01
Blizzard caught up in scandal. Again. This time it is all about ranking its employees
24.01
Cyberpunk 2077 quest director Paweł Sasko on game’s non-linearity: “Players expected more because of the fact how The Witcher 3 is built”
23.01
Key success factors for ZERO Sievert, top-down extraction shooter that generated over $1 million in its first week
23.01
All news
Market Analysis 29.04.2021 13:59

GameRefinery released its quarterly snapshot report for Q1 2021. The report looks at the iOS market in the US, China, and Japan as a whole, including genre and publisher market share, player motivations, and shifts in market trends.

The paper breaks down market performance of different genres across the three markets. 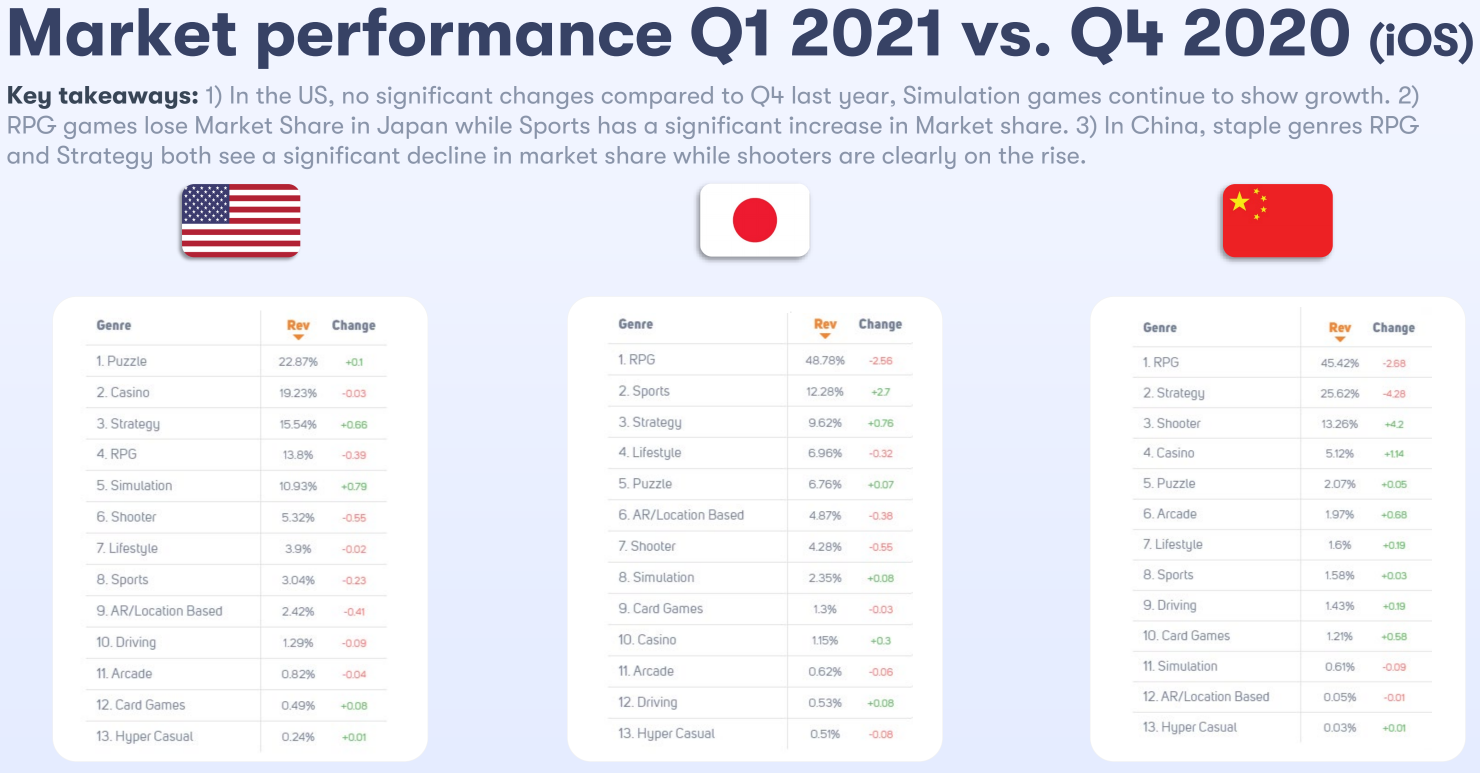 The study also points out features and mechanics trending in the three countires surveyed.

In the US, The Collectible Albums mechanic (a way for the player to see their collection of characters/items/stories/voice lines etc., in a specific place) has been utilised by 70% of the US top 100 grossing games, a 14% rise compared to last year.

In Japan, Battle Pass has been growing traction despite still being a moderately rare feature for the country. It’s mainly found in games created by Western developers, but has also been showing up in originally Japanese. Currently over 25% of Top Grossing 100 games in Japan have Battle Passes, up 11%
from last year.

In China, gacha mechanics in the top games have doubled year on year with over 30% utilisation.

The report also delves into publisher performance, player motivations dynamic, and a number of games in soft launch that represent interesting case studies. The full report is available here.