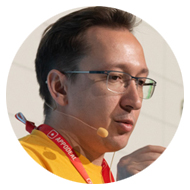 To produce this piece of research, we studied 1,000 most downloaded games and 1,000 highest-grossing games (based on their performance over the last 30 days). This approach allows us to focus on games with explicit success.

For this part of research, we only picked genres represented by more than 20 games per genre.

Using this metric lets us combine both downloads of a game and its revenue in a single figure. This approach is comprehensive and works great in practice. We display LTV estimates for iOS and Android apps separately as they sometimes differ significantly. 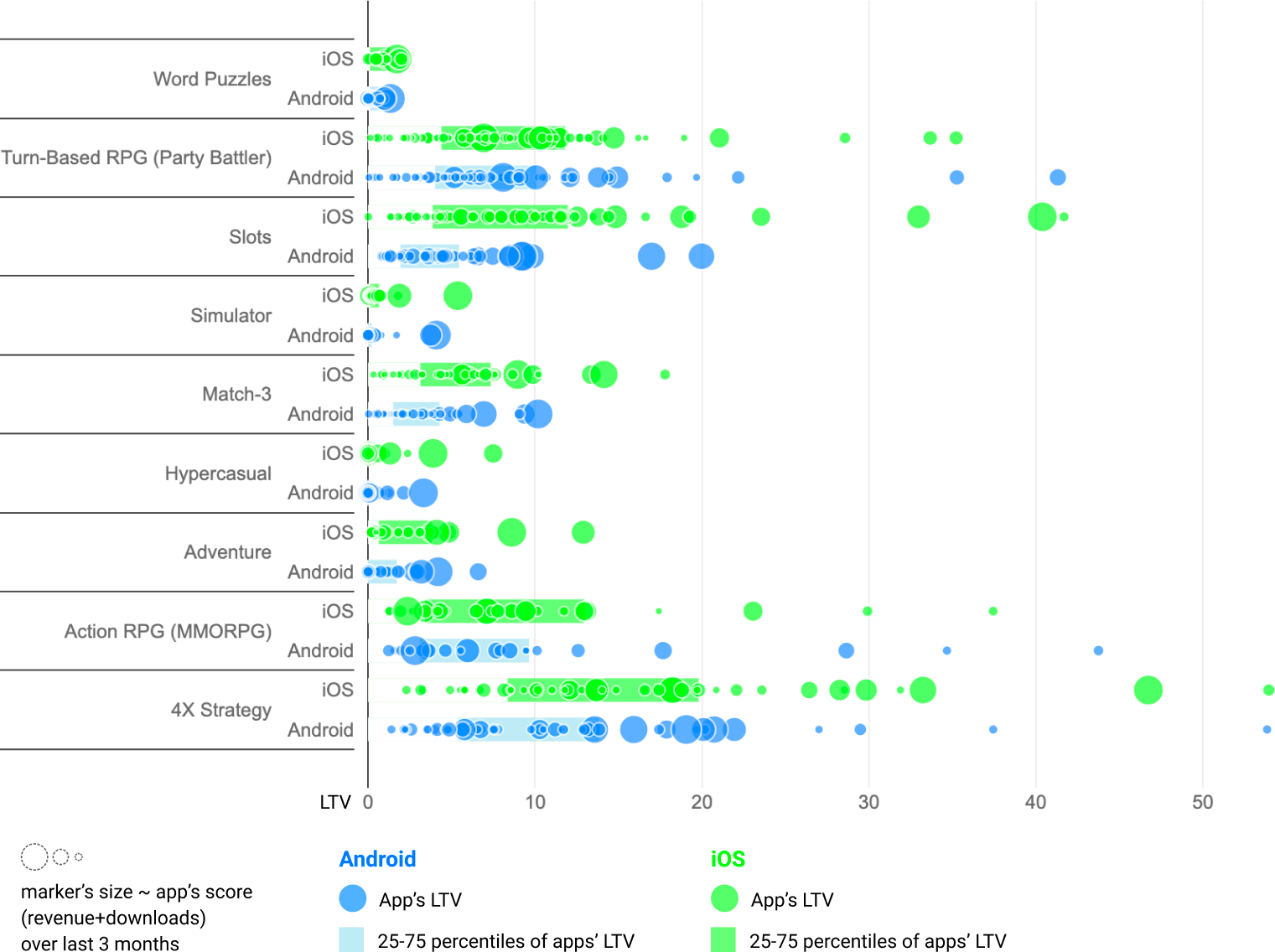 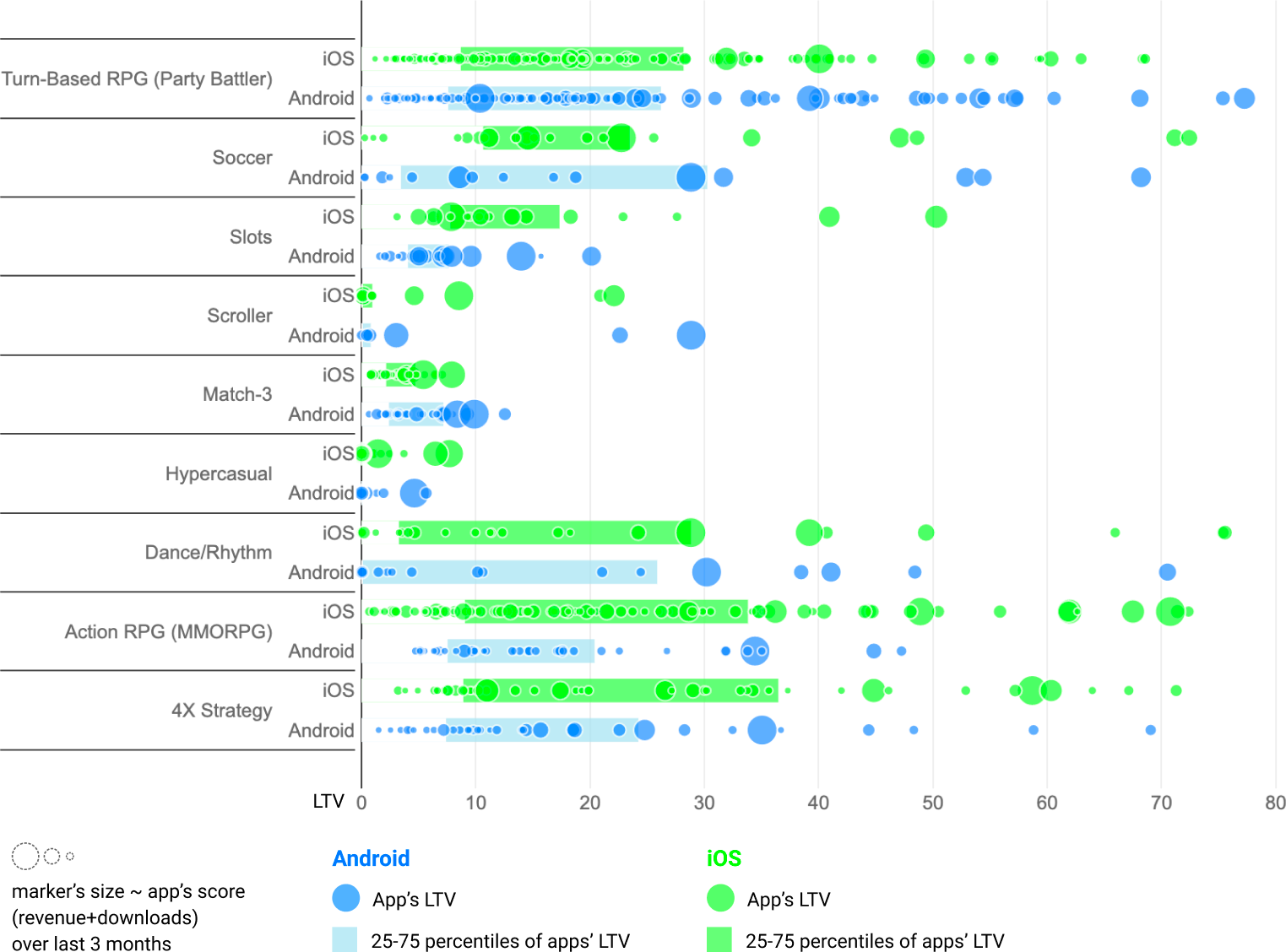 One of the key takeaways from these graphs is that, on the Asian market, there are way more games with very high average LTV.

Genres with high average LTV across games of the genre may seem very attractive for developers. But if you check games of these genres one by one, you’ll learn that they are nearly always associated with very high production costs. These games contain loads of content, tons of mechanics, high-quality graphics and top tech solutions. You just can’t compete in this field if you can’t deliver a game of a comparable level of production. In other words, high LTV within the genre shouldn’t be viewed as an explicit reason to pick it over the others.

We filtered out some games with abnormal LTV figures from the graphs to stretch out the X-axis and make them easier to read. But you may be curious to learn about them: there are more than 20 popular games with LTV over $100 on the Tier-1 East market. Here are a few examples:

This top-grossing turn-based RPG has a tremendous LTV of $430 within the Tier-1 East region. It generates 95% of its revenue in Japan. The game has generated more than $3.3B with 9M downloads worldwide throughout its lifetime.

The LTV for the mobile version of the legendary Lineage PC game exceeds $220. The game generates 99% of its revenue in Korea, having earned $1.5B in total since its launch in June 2017.

This 4X Strategy is only published in China. The LTV of this game reaches the $185 bar, having earned $370M in total.

In this section, we’ll explore how market shares have been changing across genres between 01.01.2015 and 01.01.2020. A quick reminder: we only analyze revenue from in-app purchases. 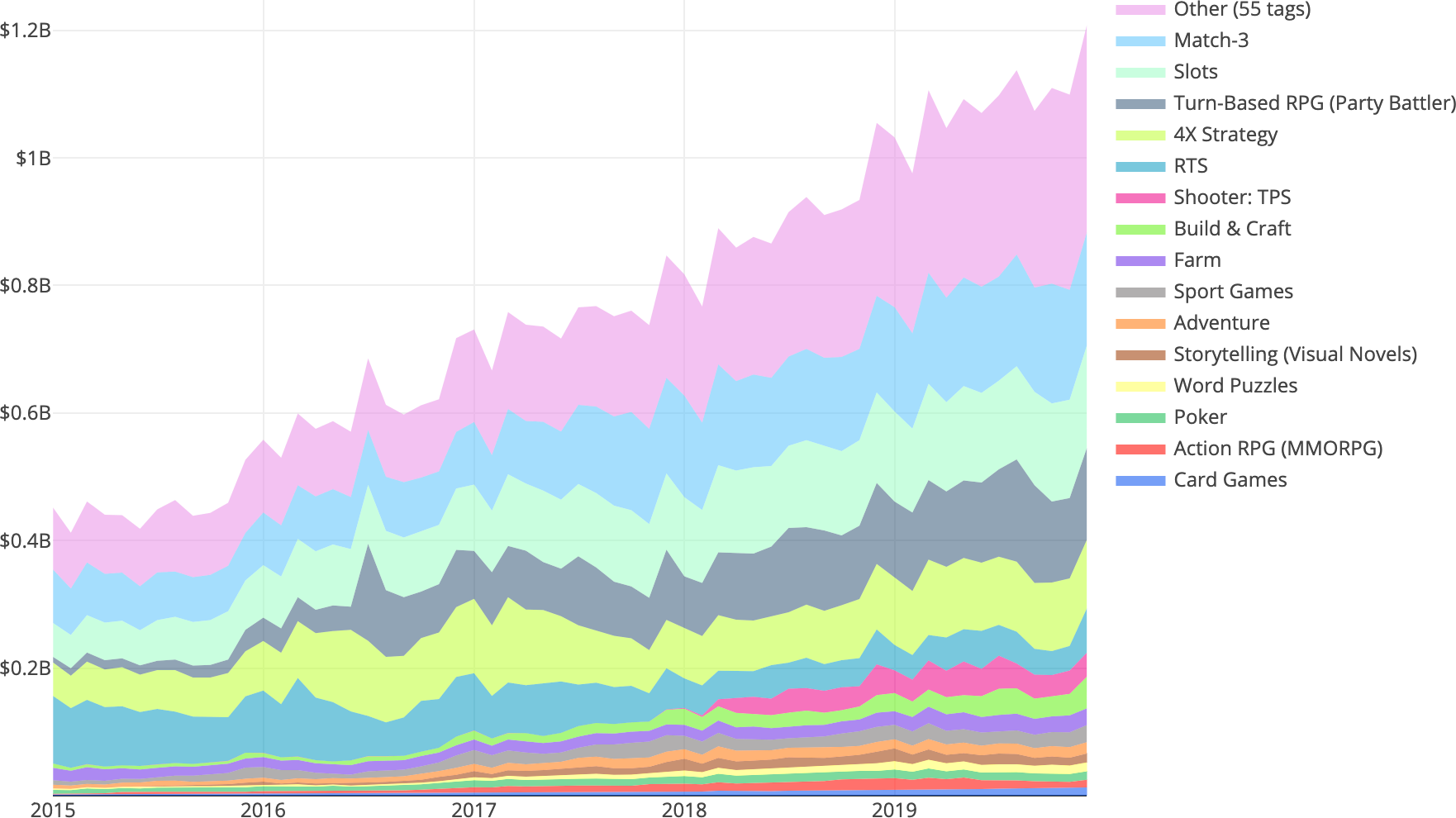 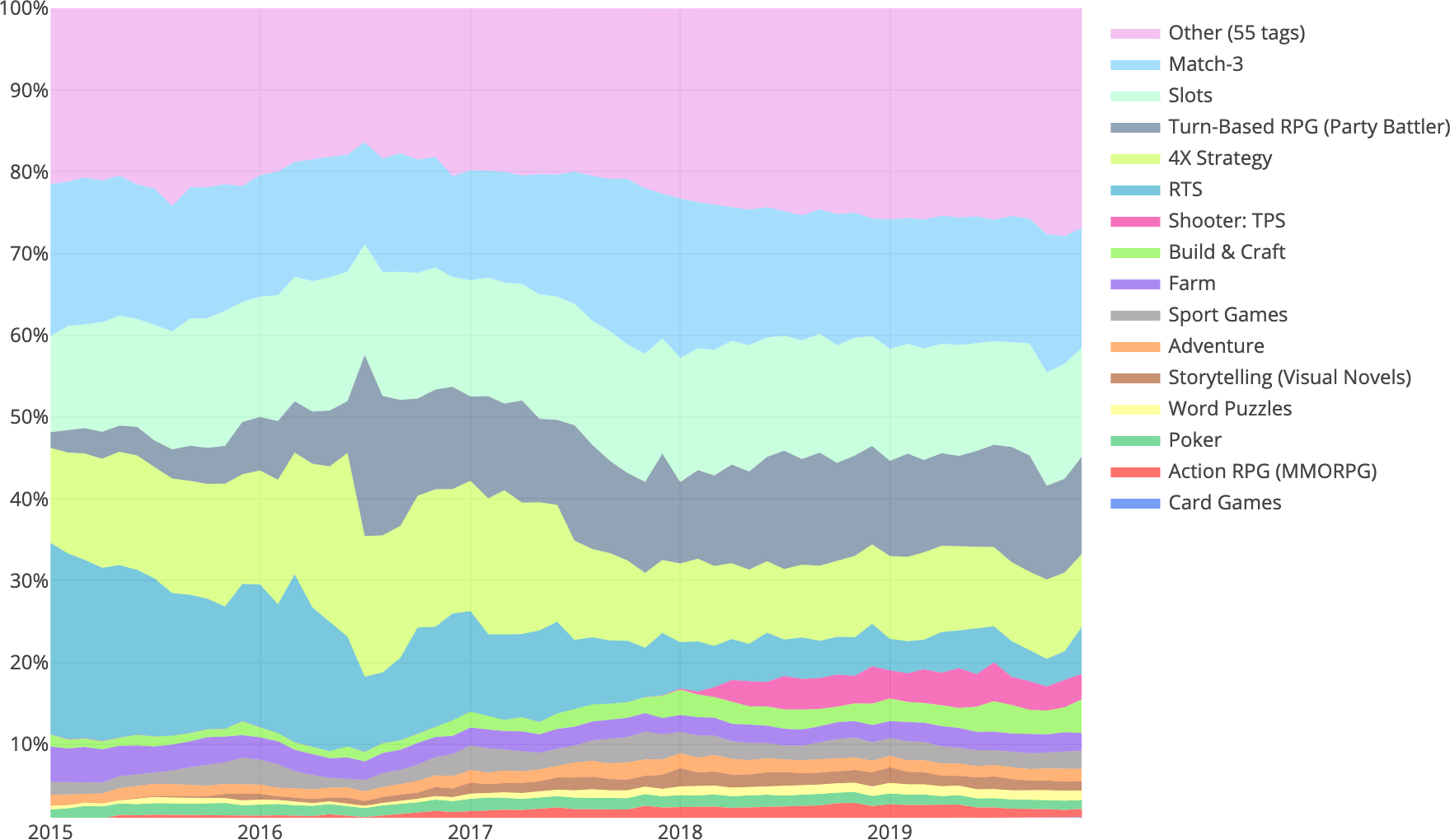 We can see the share of RTS titles [by that AppMagic means titles like Clash of Clans, Clash Royale, Plants Vs. Zombies, etc. – Ed.] declining steadily over the past few years, mainly because of the games by Supercell losing momentum.

A new genre emerged in 2018: the Third-Person Shooter (TPS). The main drivers for its growth are PUBG and Fortnite. 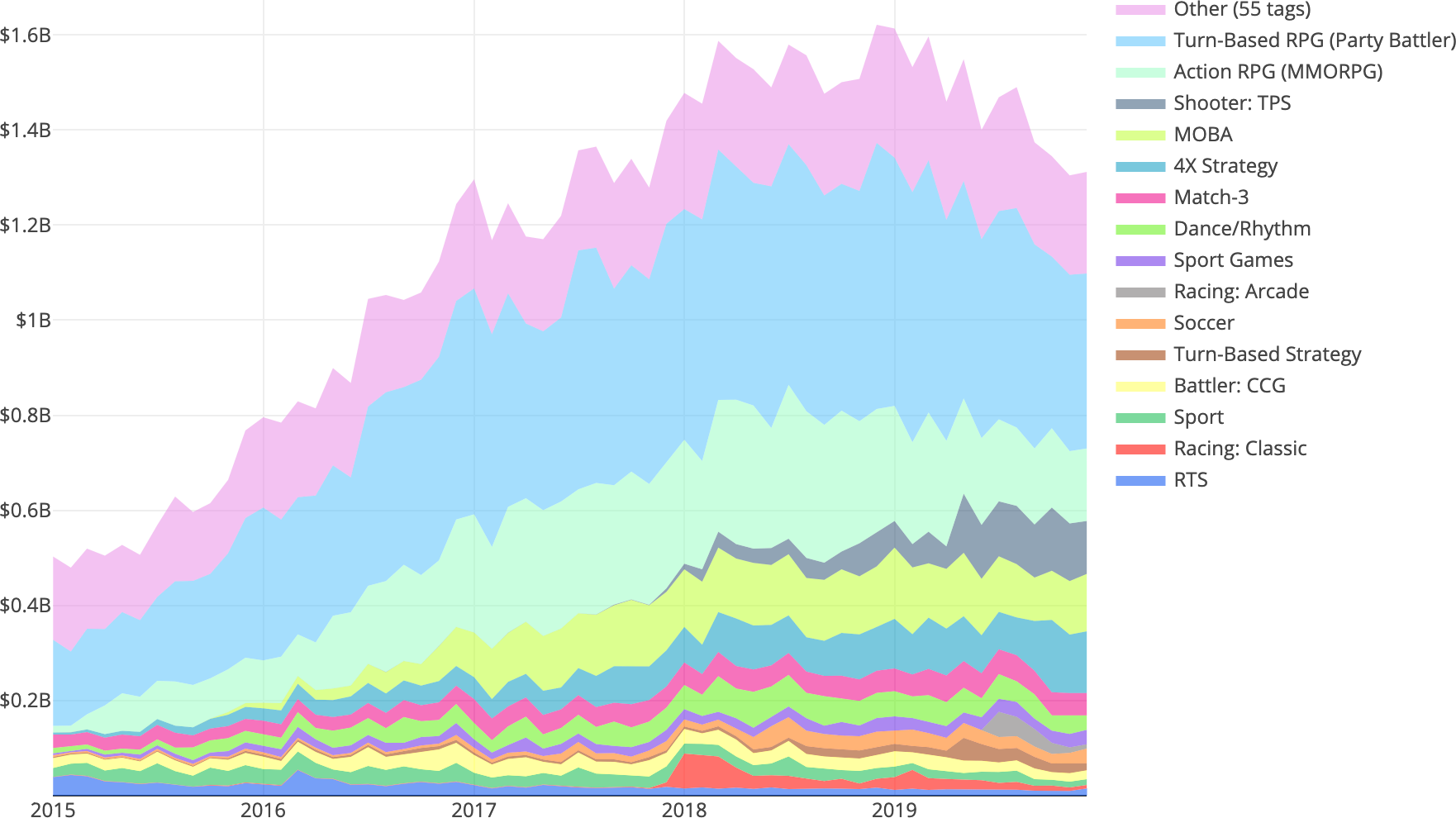 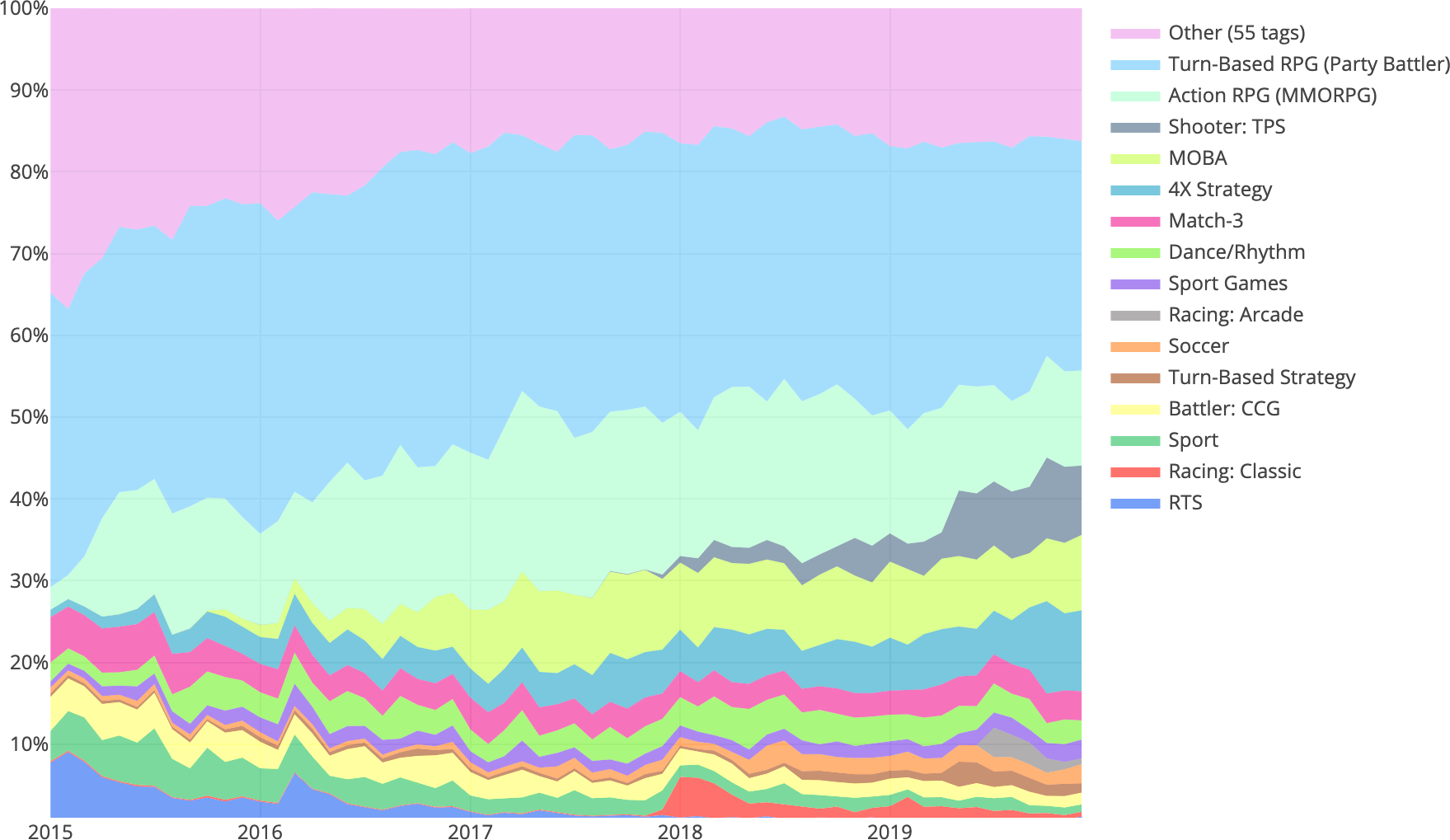 Arcade Racing games have been growing fast. And here are the key drivers in the category:

A Tencent-published mobile version of Nexon’s Crazyracing Kartrider, a PC game that is highly popular in Korea, where Nexon is holding regular e-sports tournaments with serious prize money.

A mobile version of Asphalt 9 published in China by Tencent.

95% of performance by MOBA games can be attributed to one single title: 王者荣耀 (King of Glory/Honor of Kings). It is published by Tencent (yes, Tencent again — they seem to be everywhere). This game has earned about $5B exclusively on iOS and in China alone. Mind-blowing. 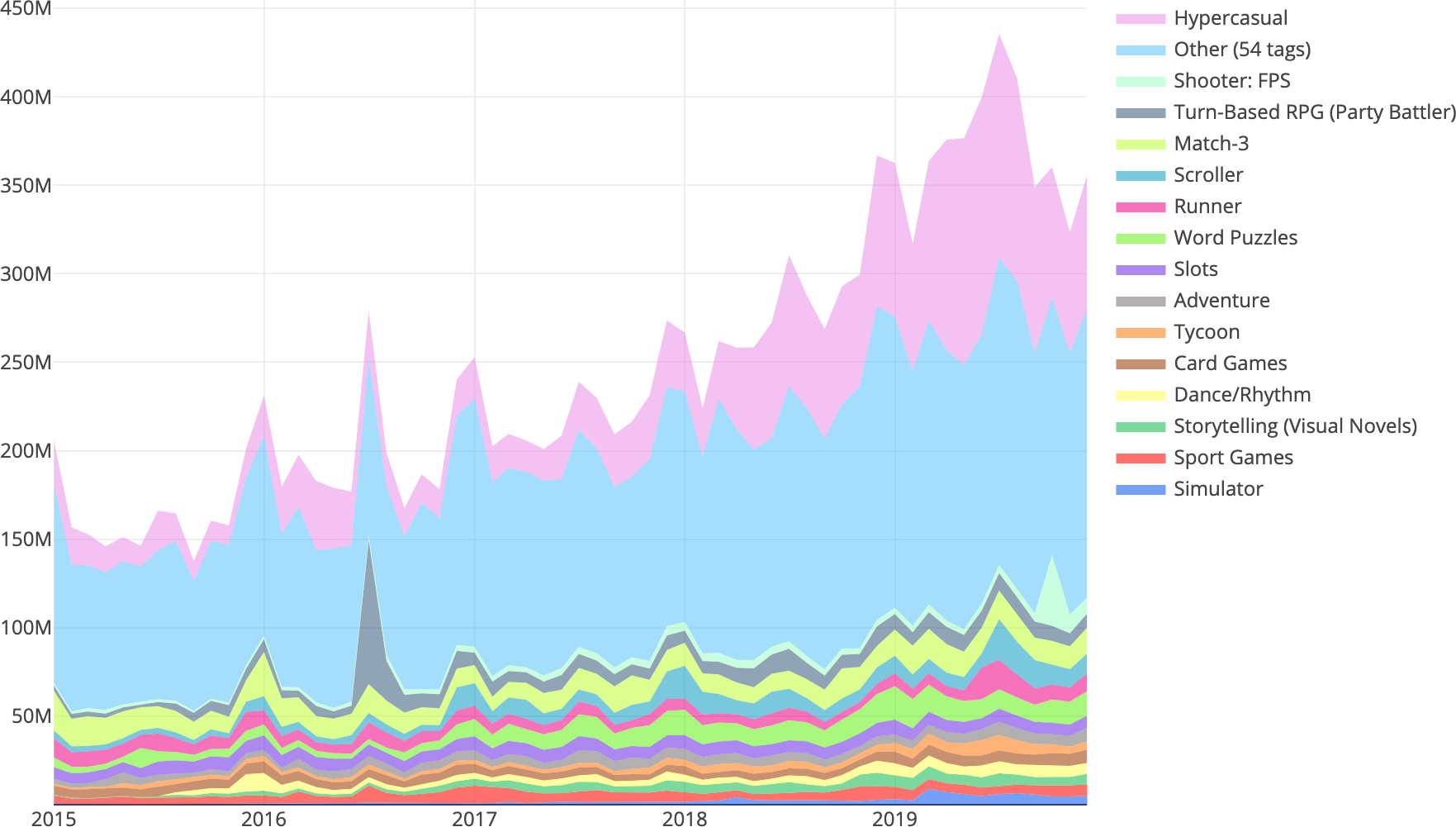 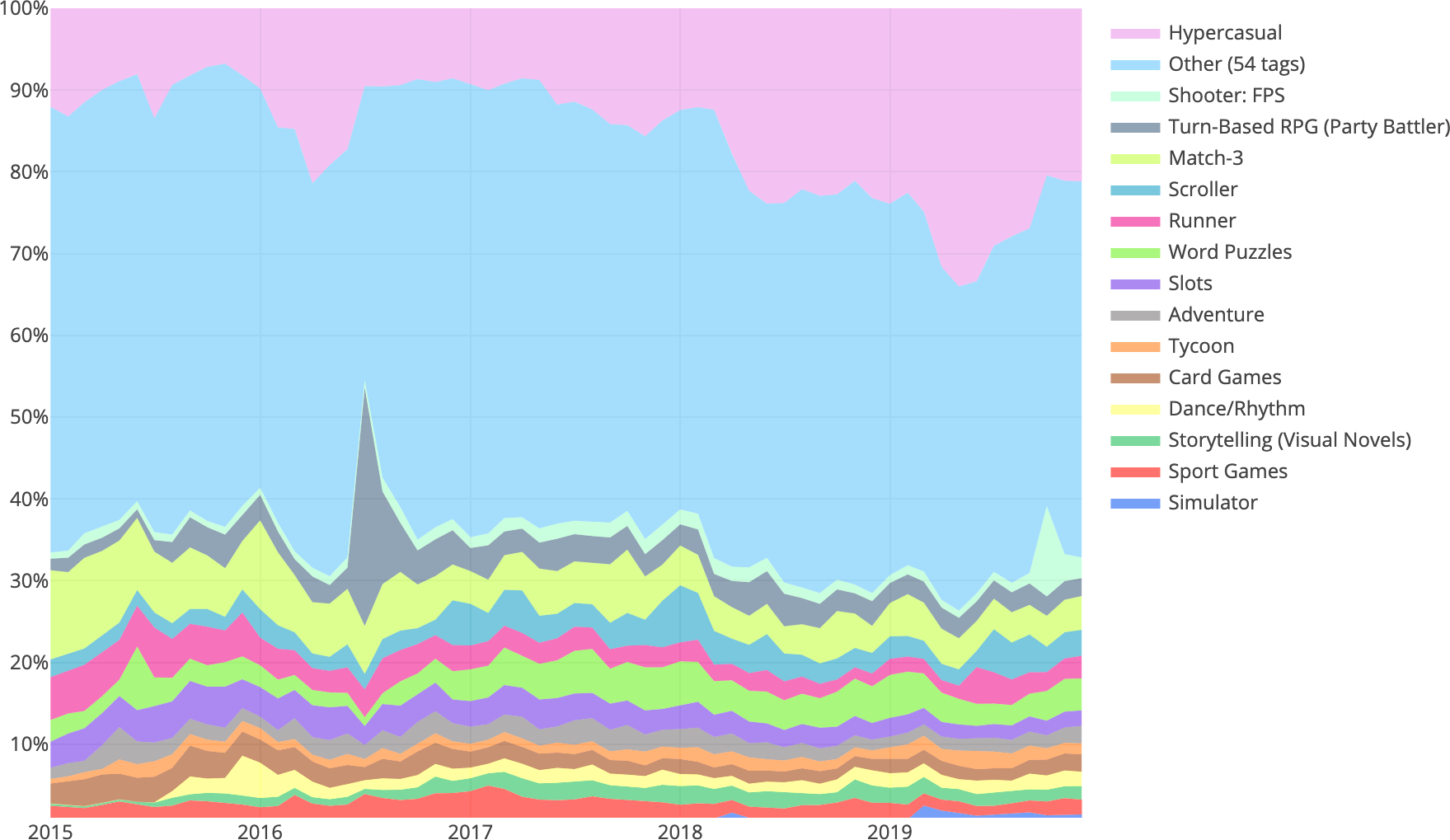 The tall gray peak is simply Pokémon Go. The peak in the Shooter: FPS category was caused by Call of Duty. The increase in downloads for Hypercasual games in the spring of 2019 occurred thanks to simultaneous releases of several very successful games. The subsequent decline, however, hardly represents the end of the Hypercasual era.

It’s a popular opinion today that Idle/Clicker genre is the new Hypercasual. But we can see that, as of now, this genre hasn’t even made it to the top 15 most popular ones. 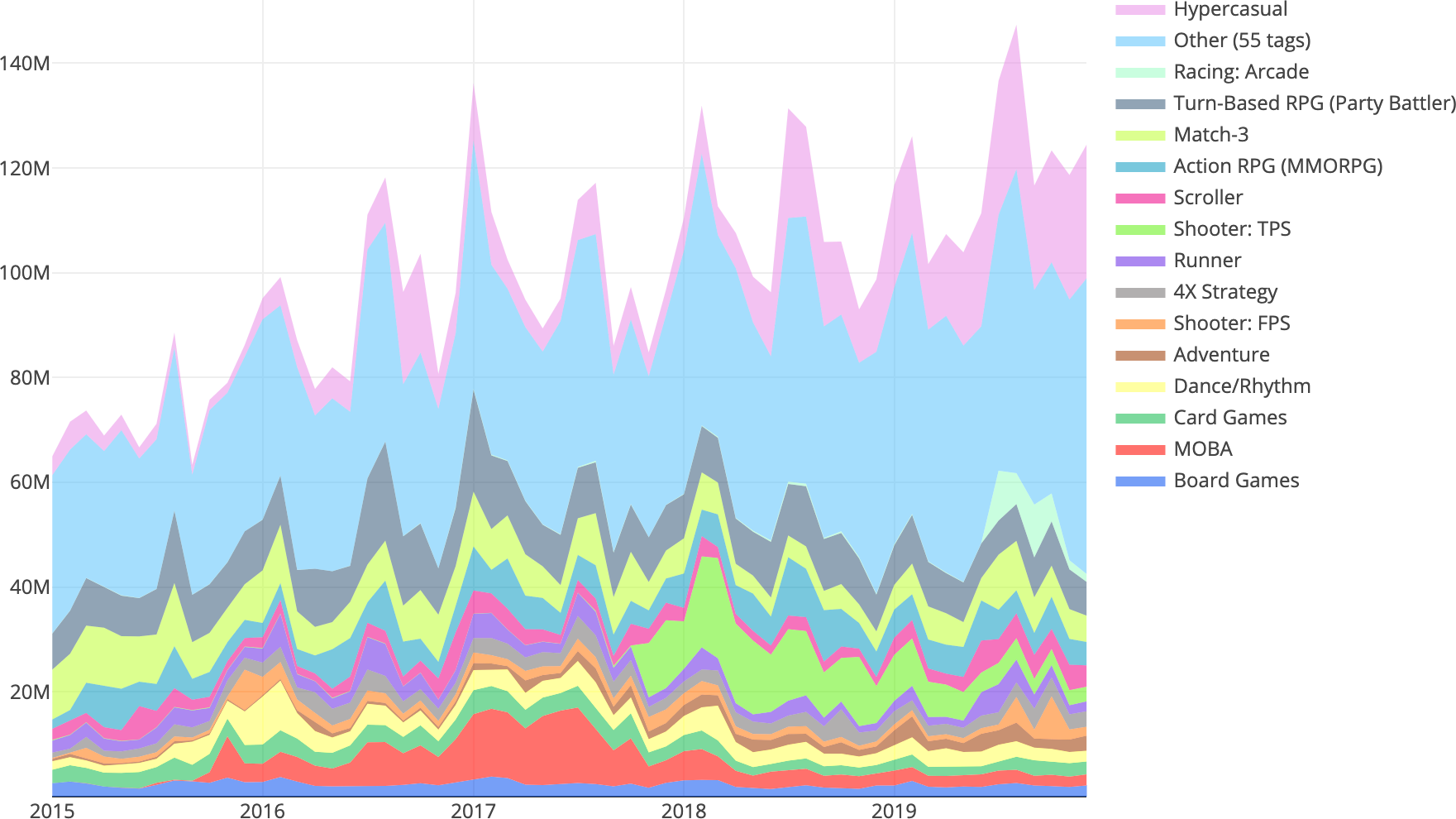 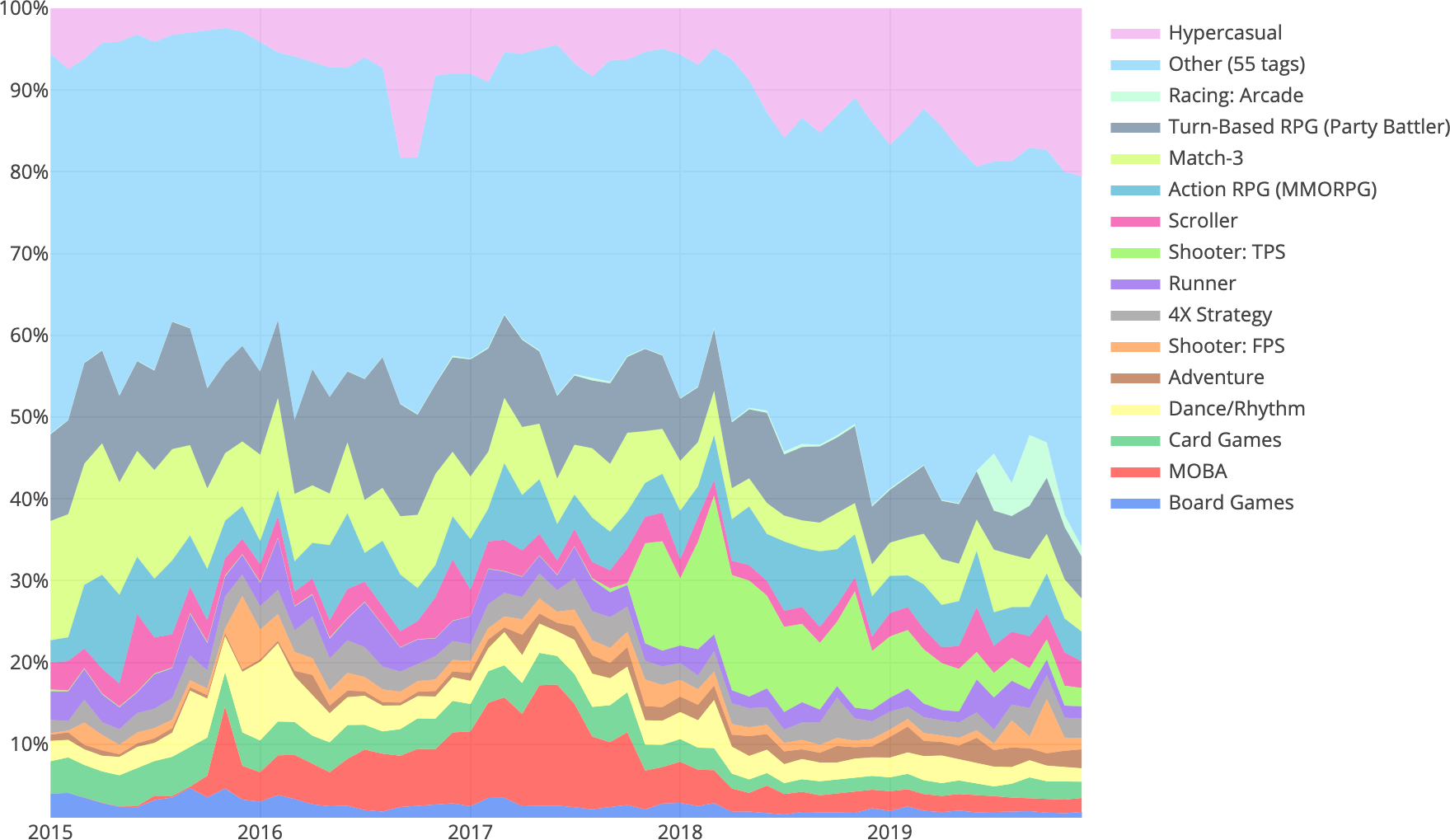 Shares of many genres in these graphs are very volatile: they rise to stardom and fade away within a mere couple of years. Therefore, these genres appeared on our radar mostly thanks to only one or two titles.

The red area of MOBA games is almost fully about 王者荣耀 (King of Glory/Honor of Kings) by Tencent, which we’ve already mentioned earlier on in the “Revenue, Tier-1 East” section.

PUBG by Tencent is mostly responsible for the results in the “Shooter: TPS” category.

The findings of the AppMagic study are originally published here.