For all its issues, one thing is true about Steam: it’s continuously working to make its systems better.

One of them is the recommendation algorithm that looks at your library to figure what similar new titles might be interesting for you. Until now, in identifying your preferences it left out all the games that you pressed that “ignore” button on, for whatever reason.

The problem with that was, of course, that Steam immediately concluded that you ignored a game because you didn’t like it, so it would avoid recommending you anything that felt like it.

Now, however, under the usual ignore button, a new drop down menu is available that allows you to check “played on another platform” option. 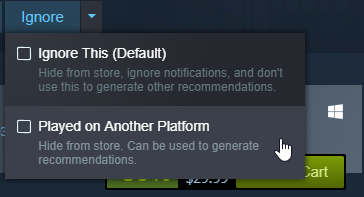 Checking that box will remove the game from your recommendations list, but Steam will no longer aboid recommending you other games that are similar to it.

Valve’s Alden Kroll clarifies on Twitter: “But you shouldn’t feel compelled to go back and change the state on all those games. The plan is to feed the new ‘played on other platforms’ data into new recommendation engines such as this one in Steam Labs”.

Kroll refers to the Interactive Recommender that Valve rolled out in July among other experimental features.

PCGamesN also suspects that the new option will allow provide Valve with intel on what games you choose to play elsewhere.