It Takes Two hits 10 million unit sold. “Nobody expected this,” says Josef Fares
18:22
Over 1 million Chinese players apply for refunds due to expiration of Blzzard’s agreement with NetEase
14:58
NCSoft West lays off 20% of employees as part of ‘global realignment’
13:09
Organic discovery and app store featuring to be declared dead in 2023, according to Deconstructor of Fun
02.02
Dwarf Fortress made $7.2 million in January, 44 times more than in all of 2022
02.02
PlayStation reports 53% Q3 revenue growth, driven by strong sales of consoles and third-party games
02.02
Tenjin and GameAnalytics release Q4 Hyper-Casual Games Benchmark Report
01.02
Chris Zukowski: Steam can only promote up to around 500 indie games per year
30.01
Wargaming top manager called a terrorist by KGB Belarus
30.01
AI USE CASE: How a mobile game development studio saved $70K in expenses
27.01
All news
Industry News 15.12.2022 15:49

ArtStation has finally responded to the backlash from artists calling on the platform to ban AI-generated art. The company, however, tried to find a compromise, which further angered many professionals. 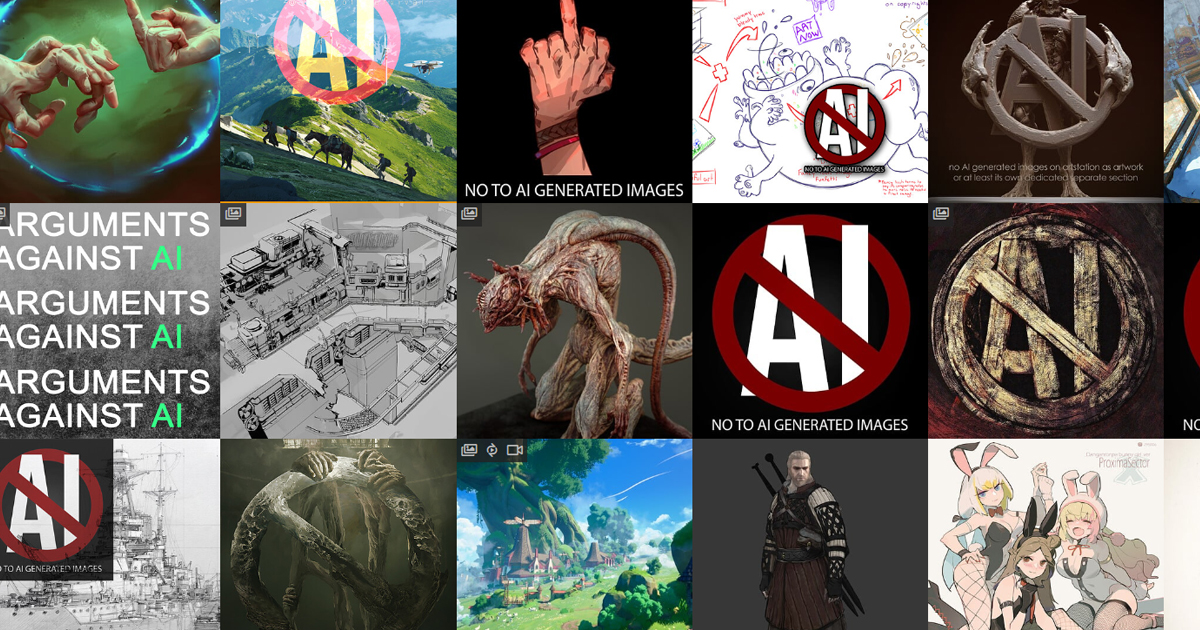 ArtStation recently was flooded with images and art generated with Midjourney and other tools. This led to many artists protesting against the use of AI art on the platform. Some of them even threatened to boycott ArtStation.

On December 10, MultiVersus senior character artist Dan Eder shared a screenshot of the platform’s main page and noted that it is “beyond disrespectful” to put AI-generated images alongside human artwork.

“I don’t hate AI-generated art,” he wrote. “I actually think it’s an incredibly powerful [tool] that can be used ethically — creating mood boards, references, patterns. But claiming it as your own and putting it in your portfolio as-is is where the line should be drawn.”

Seeing AI art being featured on the main page of Artstation saddens me. I love playing with MJ as much as anyone else, but putting something that was generated using a prompt alongside artwork that took hundreds of hours and years of experience to make is beyond disrespectful. pic.twitter.com/4p2MLDbADD

As a result of this backlash, many professional artists demanded that ArtStation address this issue. They started protesting against the use of AI-generated art on the platform by posting similar pictures reading “No to AI-generated images”, which eventually flooded the Trending section.

“I know this is a nuanced topic, with some art being completely AI-generated, some hybrid work, and some created by traditional digital means, but it’s time to start having this discussion so the site can be as useful as possible to the whole community,” art director and concept designer Neil Blevins wrote.

Hey @ArtStationHQ we absolutely need a way to filter the site so art directors and clients can more easily find art by people vs ai generated work. You’ve been too quiet on this issue, time to update the site! pic.twitter.com/aJRQczsv3T

On December 14, ArtStation made a blog post, saying that its guidelines don’t prohibit the use of AI in the process of creating art. It only urged artists to publish original works on the platform: “The works on your portfolio should be work that you created and we encourage you to be transparent in the process.”

However, ArtStation noted that it has no plans to “stifle AI research and commercialization when it respects artists’ choices and copyright law.” Instead, it wants to give artists an option to disallow the use of their art for training AI research.

How did artists react to this?

This response was met with criticism from artists, who don’t like that their work has already been illegally used to train certain models and that the prevalence of AI art will make it harder for professionals to use ArtStation as a portfolio platform.

Therein lies the rub, all AI and the people who developed that technology or use it do not own the images that it sources.

There are artists who already have tested AI for feasibility as a tool but it’s STILL A LIABILITY.

How are we going to find good hires wading through THAT? pic.twitter.com/sGzQMB5nwp

Some artists even publicly unsubscribed from the service.

However, some disagreed with such a strong backlash. Poliigon founder Andrew Price thinks that boycotting ArtStation and AI in general seems “futile.” He added that artists should adapt and “leverage AI for its strengths, switch to traditional for its weaknesses. Artists who know both will have the best opportunities in the coming years.”

I think @ArtStationHQ made the right call by not outright banning it. But they should add a new option to the art genres: 2D, 3D and “AI/Hybrid” so users can filter it out if they wish. https://t.co/UrkmtwxmjR

The AI debate is heating up in the professional community. Earlier this week, we reported on what developers think about generative AI and why many of them remain skeptical.