It Takes Two hits 10 million unit sold. “Nobody expected this,” says Josef Fares
03.02
Over 1 million Chinese players apply for refunds due to expiration of Blzzard’s agreement with NetEase
03.02
NCSoft West lays off 20% of employees as part of ‘global realignment’
03.02
Organic discovery and app store featuring to be declared dead in 2023, according to Deconstructor of Fun
02.02
Dwarf Fortress made $7.2 million in January, 44 times more than in all of 2022
02.02
PlayStation reports 53% Q3 revenue growth, driven by strong sales of consoles and third-party games
02.02
Tenjin and GameAnalytics release Q4 Hyper-Casual Games Benchmark Report
01.02
Chris Zukowski: Steam can only promote up to around 500 indie games per year
30.01
Wargaming top manager called a terrorist by KGB Belarus
30.01
AI USE CASE: How a mobile game development studio saved $70K in expenses
27.01
All news
Marketing 07.12.2022 18:28

Developers have to fight old games for the attention of Steam players. So it is better not to underestimate the impact of existing hit titles, which continue to receive thousands of reviews per month, even years after their launch.

Simon Carless touched on this topic in the latest episode of the GameDiscoverCo newsletter. To illustrate how some evergreen titles challenge new releases, the team made this Google spreadsheet.

It compares the top 20 new games of October 2022 by review count in their first 30 days on sale with the top 20 old games by number of reviews in the same period.

Here are some key takeaways: 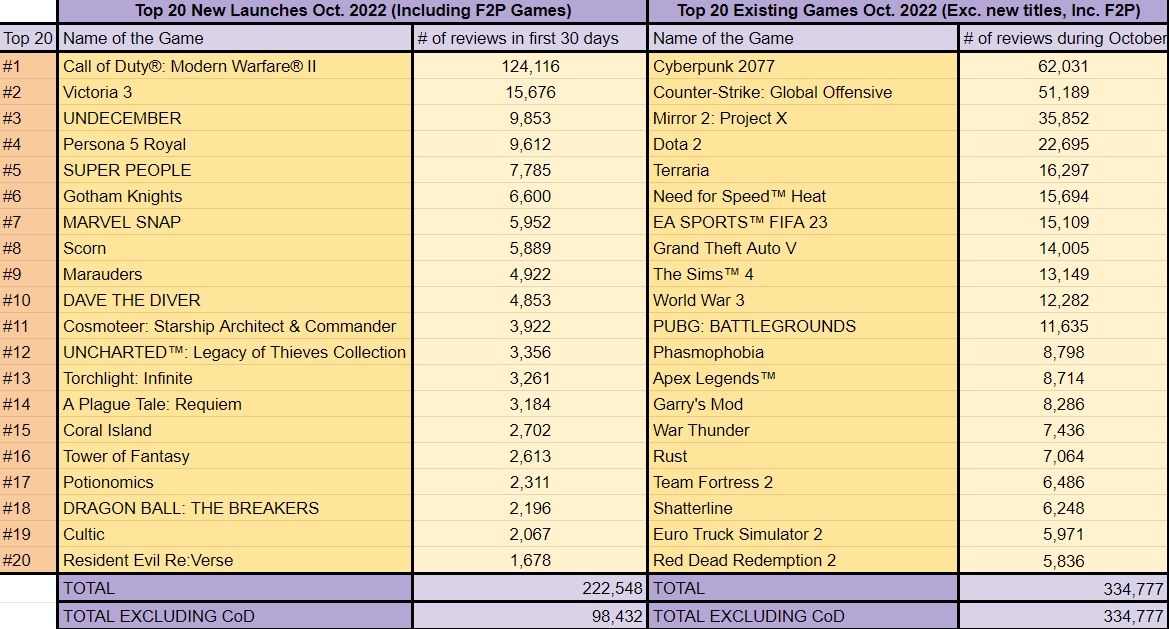 Carless noted that Rust, which was first released in Early Access almost nine years ago, received more reviews in October than Gotham Knights did in its first 30 days on sale. He also cited Terraria, which is still getting 15,000 reviews per month, as another example.

So developers have to compete with not only other new releases, but also with successful GaaS and evergreen titles (as well as their huge audiences, years of post-release support, and content updates).

Of course, you won’t get a complete picture of the current state of the PC market just by comparing the review count of old and new games But this spreadsheet can at least give rise to some pretty interesting thoughts. As Carless concluded, it is vital to see the “entire market more holistically, and [think] about both displacing existing older games, as well as competing against new ones.”