How to create Red Alert-inspired game assets by fine-tuning Stable Diffusion
18:42
Member of CD Projekt’s board of directors sells 50,000 shares for almost $1.5 million
16:25
Persona 5 Royal reaches 3.3 million units sold, with total sales surpassing 8 million copies
14:56
Apex Legends Mobile becomes best game of 2022 for both Android and iOS
12:26
Todd Howard on making games playable for 20 years: “It changes the way you think about how you architect them from the get-go”
30.11
Valve removes SimFabric games from Steam over fake reviews allegations
30.11
Loot boxes cause financial and emotional harm to kids due to gambling-like design techniques, UK study says
30.11
Median indie game earnings on Steam barely exceed $1,000 lifetime
29.11
“It should serve as a lesson in how not to do business”: what does the end of Stadia mean for cloud gaming?
29.11
Report: Microsoft ready to make concessions in Activision acquisition, including licensing deal with Sony
29.11
All news
Game Development 14.09.2021 16:56

No More Robots’ Mike Rose: “The idea that the longer you spend on a game the more money it will make is just a complete fallacy”

Mike Rose, the founder of indie publisher No More Robots, did a talk last month on how small studios should validate or adjust their development plans by setting realistic expectations about how much the development is going to cost them versus how much the game is going to bring in.

The recording of the talk went live last week. We’ve rounded up the key takeaways from it.

What to look out for?

For first-time studios in particular, Rose suggests using the formula below, which is a simplified tool to predict if your undertaking is going to be financially viable. 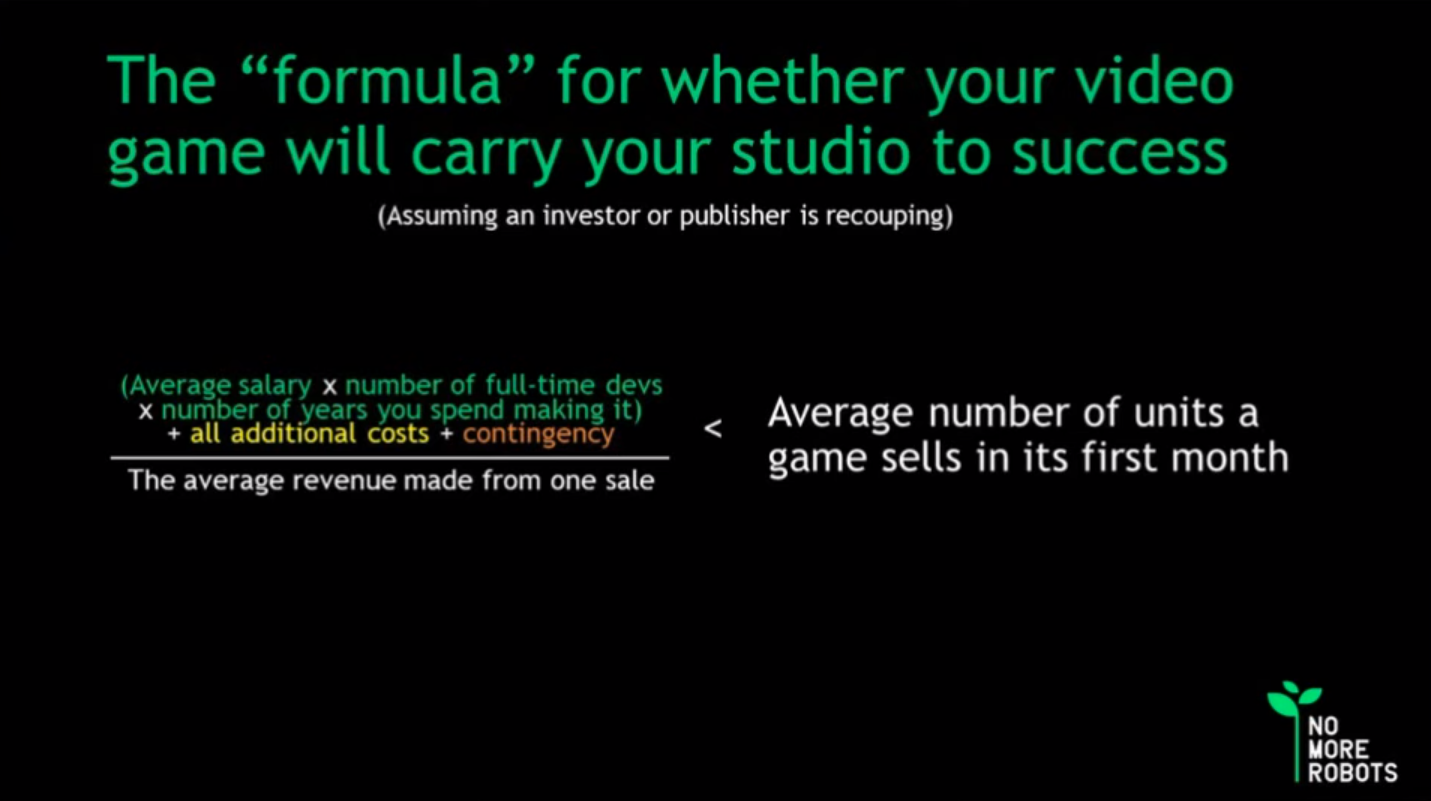 The formula takes all the production costs (including unexpected stuff) and divides them by how much money each copy is going to make. The resulting number should be lower than the number of units you expect to actually sell in your first month.

Here’s how the formula works for some specific inputs: 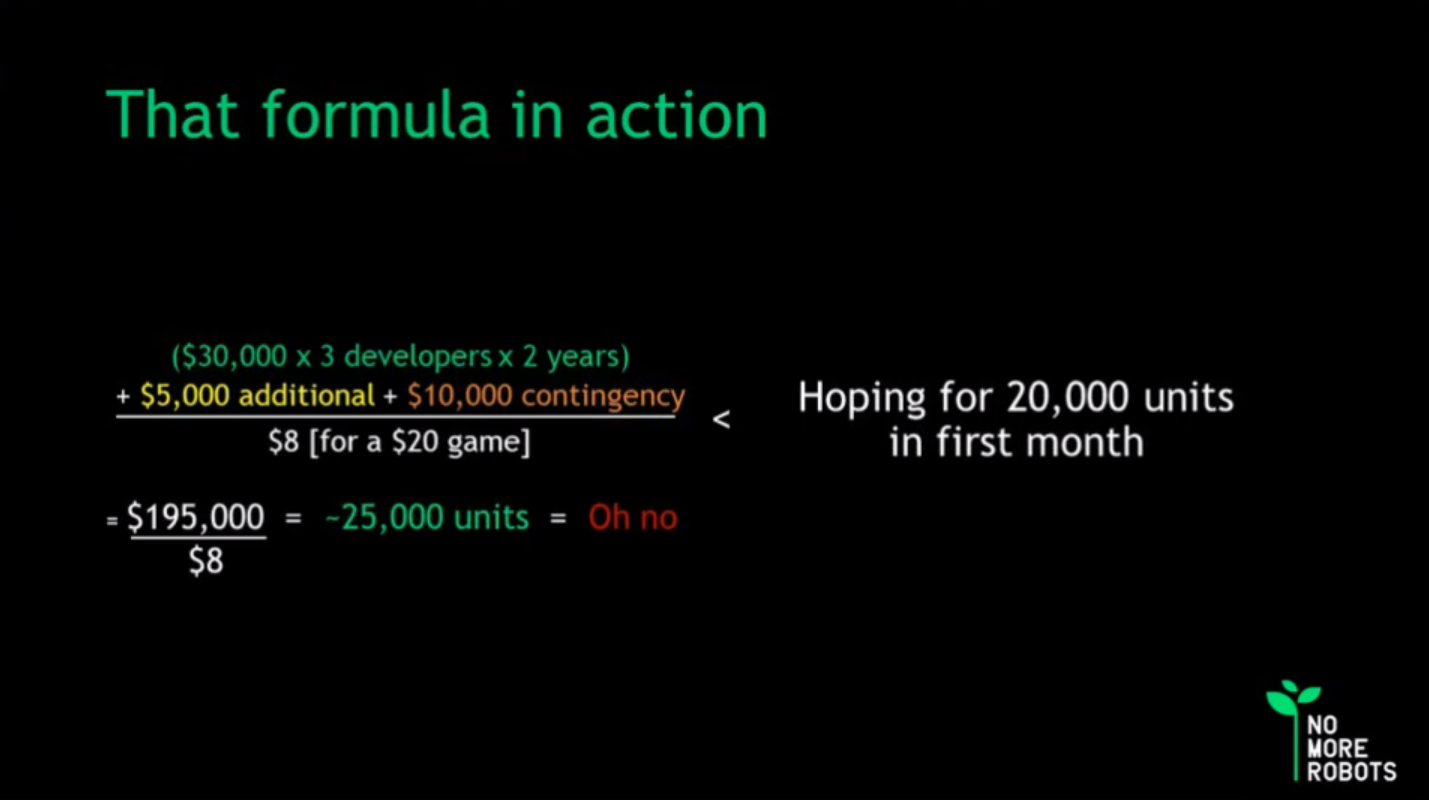 For example, a team of three are going to be working on a game full time together for two years. Let’s assume that the average dev salary is $30,000 a year. You then add additional costs (e.g. localization) and contingency (extra expenses if your game takes longer than expected), with $5,000 and $10,000 being extremely conservative estimates (in reality, you’ll probably need to add much more).

Then you divide that budget by $8 because that’s roughly the amount you are actually going to make per copy if you price your game at $20 (that’s after you deduct platforms’ cut, taxes, losses due to currency conversion, etc.).

The formula tells you that you’ll need to sell around 25,000 units with that setup to make your money back. And that’s unfortunate because most games will not sell 25,000 units in the first month.

Depending on the number of people working on the team versus how long you are going to be working on it, Rose suggests using this matrix to roughly estimate the production costs. 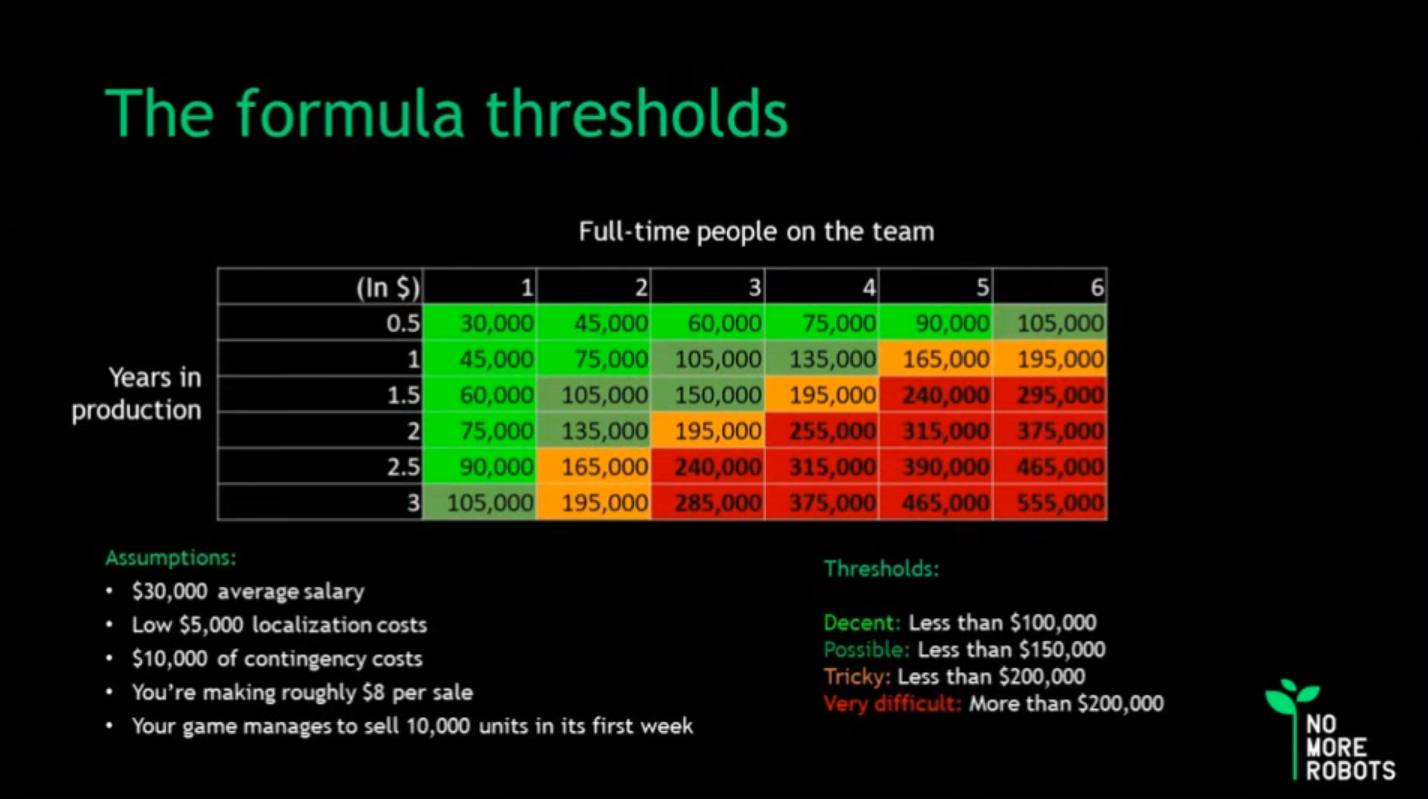 Down the right-hand side, in red, are the budgets that make it extremely difficult to make your money back. If you are in the green zone, it means you’ve got a chance

Based on the assumptions outlined above, for a team of four working on the game for two years, the production would end up costing about quarter million. This is not to make you feel desperate, but it’s definitely something that should allow you to realistically consider your options.

The picture gets even more grim, if you keep in mind that you will not start immediately seeing any cash flow after the game comes out. Platforms pay out on a delay, which could be months. And if you have a publisher, they will probably need to recoup the investment before you start getting paid.

Finally, most games just take longer than you initially planned.

Realistically, it makes sense to add at least another six months of burn rate on top of the time you already expect to spend on the game.

To reflect that, Rose updated the table as follows: 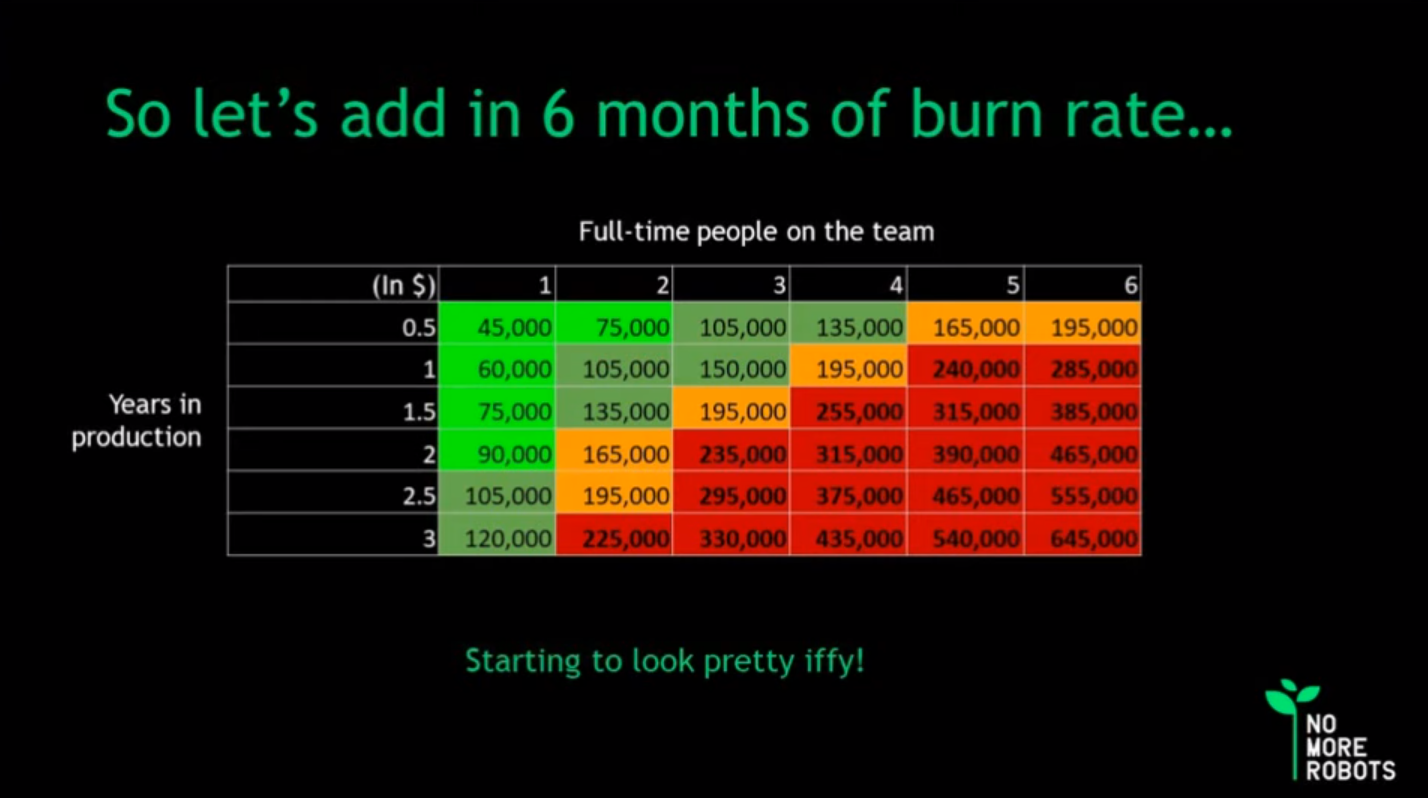 It should be noted that these estimates are made for a game that is launching on a single platform. Ports can const anything from $10,000 to $100,000.

The silver lining in all of this is that there are also ways you can tweak these numbers in your favour.

First and foremost, Rose is a big believer in NOT spending too long making games. With development time lasting 6-12 months, chances of breaking even are significantly higher.

Planning for a four-year development time just means dealing with too many unknowns (like not knowing if subscription models are going to maybe dominate the market, or which genres are going to be selling at that time).

Crucially, according to Rose, a longer development time does not equal a higher quality game. It only means the game will cost more. “The idea that the longer you spend on a game the more money it will make is just a complete fallacy,” Rose says.

If, on the other hand, you build something small at least for your first project, you’re reducing the risks because it automatically costs less of your time and your money.

Rose also warns against trying to make all the features you have in mind available at launch. Instead, some of the features can be shifted post-launch. Rolling out news stuff post-launch can be a great way to continue to bolster the community around the game.

Secondly, you might want to consider NOT having everybody work full-time from day one of production.

For example, a couple of programmers might be hard at work during the first months of production, while other people on the team will be bottlenecked and waiting for things to be built so that they work on them.

Third, there are grants you can apply for that will not always cover all of the development costs but might make a critical difference for you by alleviating the financial burden.

Lastly, Rose encourages devs to take into account how stressed out and burnt out you can get post-launch. For most people, the sheer amount of stress can make it impossible to start working on the next game right away. In fact, it could be years before you are ready to work on the next title, if ever. This is also something that should be taken into account, as well as all the ways you can potentially get support if you need it.

Rose concluded his presentation with an example of a setup that he considers viable: 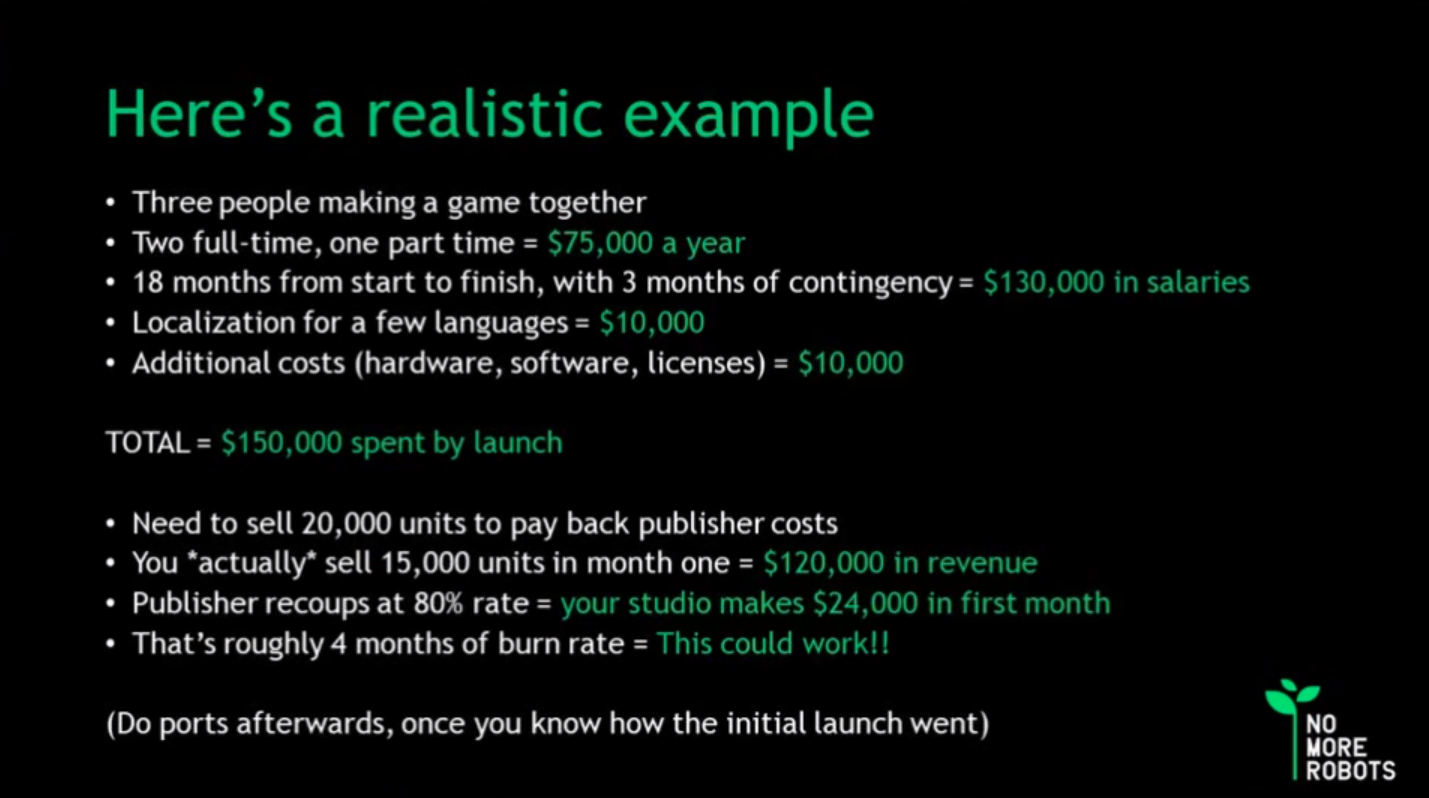 The full video is available here.