It Takes Two hits 10 million unit sold. “Nobody expected this,” says Josef Fares
03.02
Over 1 million Chinese players apply for refunds due to expiration of Blzzard’s agreement with NetEase
03.02
NCSoft West lays off 20% of employees as part of ‘global realignment’
03.02
Organic discovery and app store featuring to be declared dead in 2023, according to Deconstructor of Fun
02.02
Dwarf Fortress made $7.2 million in January, 44 times more than in all of 2022
02.02
PlayStation reports 53% Q3 revenue growth, driven by strong sales of consoles and third-party games
02.02
Tenjin and GameAnalytics release Q4 Hyper-Casual Games Benchmark Report
01.02
Chris Zukowski: Steam can only promote up to around 500 indie games per year
30.01
Wargaming top manager called a terrorist by KGB Belarus
30.01
AI USE CASE: How a mobile game development studio saved $70K in expenses
27.01
All news
Industry News 09.08.2021 17:07

There are now over 50,000 games on Steam. The new tool, developed by Level Up Labs co-founder Lars Doucet in collaboration with SteamDB, allows you to track engines and technologies used in all of these titles.

Doucet announced the launch of the new tech on August 6. Its rules are also published on GitHub.

Here is how the new tool actually works. With every app on Steam associated with a number of file depots, SteamDB runs special scripts over all the filenames in all of the depots. Based on this information and the already existing game engine data, the service links games to specific technologies.

Heya! I am collaborating with @SteamDB to automatically detect game engines & tech used in all the games on Steam.

Here’s the Github for our detection script:https://t.co/V1yj99DIYN

It comes as no surprise that Unity sits on top of the list, with 29,226 titles made on it. It also became the most popular game engine among the top 50 best titles on Steam, according to user reviews. Unity is followed by Unreal (7,405 games), GameMaker (2,585), RPGMaker (1,942), and Construct. The new tool also allows you to see all games made on specific engines. 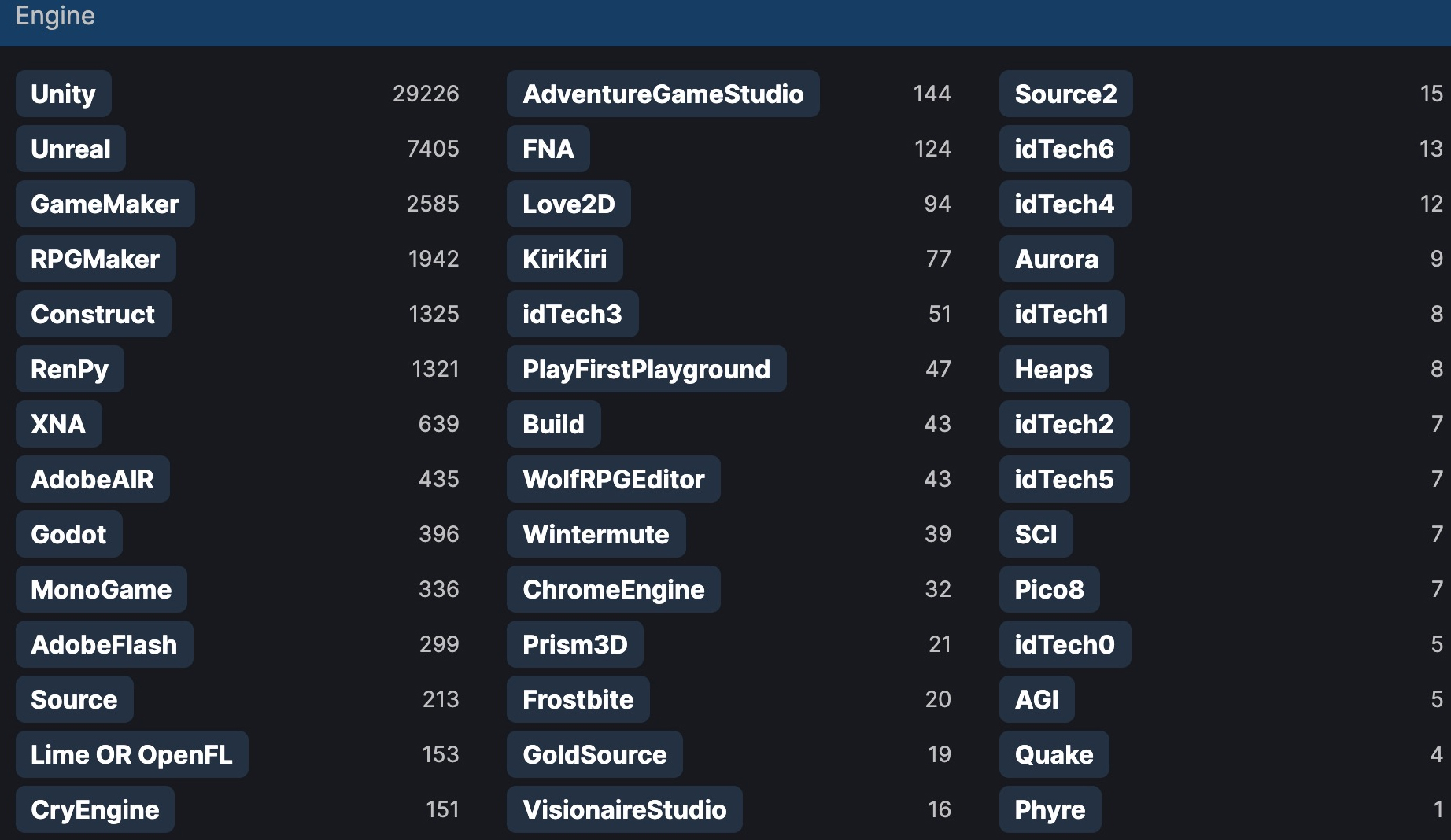 According to Doucet, the tool still can’t detect engines that it doesn’t have rules for. It also can’t detect everything due to false-negative results. “This will never be perfect, do not expect it to be perfect,” Doucet said.

On top of that, the new tool also detects other technologies used in Steam games, including SDKs, emulators, and anticheats.