SEGA Searchlight: “2020 was the first year when more pitches used Unreal over Unity”

2020 has changed not only how games are made, but also how publishers find them. Previously, pitches were mostly made at large events in person. Now that this is off the table, canvassing for devs is very different. Bobby Wertheim, director of content at SEGA Searchlight, discusses the new realities of networking at WN Winter’21. Wertheim is on the lookout for new games. His job is to meet and talk with developers, evaluate pitches and decide whether the a particular game is potentially interesting or not. He represents SEGA Searchlight. It is SEGA’s incubation and investment program for third-party studios. It focuses on new IPs.

Prior to the global lockdown, Wertheim says, he had a predictable event calendar for the entire year. The first half of the year was traditionally the most active. On average, he attended 1-2 events per month. This was enough to showcase Sega and to meet various teams, to build relationships with them.

In the brand new world of online events, networking has become a challenge. To get the same level of coverage, SEGA Searchlight had to double the effort. Since last May, Wertheim started virtually attending three events a month. As a result, in 2020, he attended 34 events (that’s up from 19 a year earlier).

This helped SEGA Searchlight maintain the pre-pandemic level of coverage, which is roughly 2,000 new pitches per year.

However, it became more difficult to predict which events are going to be effective. Previously, he knew, more or less, what to expect from E3 or gamescom, and what come out of a smaller event. With online events, this is no longer the case. You never know if an event will result in interesting meetings or not. On the other hand, there are no more peak months versus months of inactivity. Previously, peaks coincided with the key events, with drops in activity happening between them and in winter. Now the networking activity is distributed evenly throughout a year. 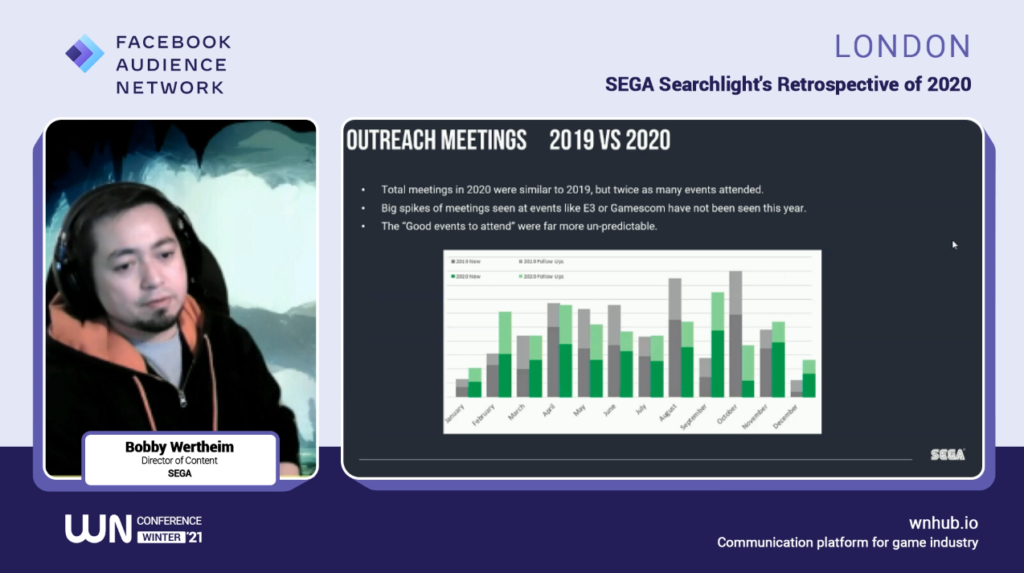 Towards the end of the talk, Wertheim shared some interesting stats from the many pitches he saw in 2020. This is not reflective of the entire market. However, the data provide some insights into the segment SEGA Searchlight is interested in (the company is looking primarily for premium games for PC and consoles).

Interestingly, for the first time, there are now more pitches with Unreal games than those utilizing Unity. According to Wertheim, previously smaller low-budget games used Unity, while devs who wanted to secure a more substantial funding gravitated towards Unreal Engine. Now this division is no longer relevant. A project using Epic’s engine can come from a small team planning a low-budget debut.