Chris Zukowski: Steam can only promote up to around 500 indie games per year
30.01
Wargaming top manager called a terrorist by KGB Belarus
30.01
AI USE CASE: How a mobile game development studio saved $70K in expenses
27.01
Sensor Tower: Subway Surfers was most downloaded game in Q4 2022, but the Stumble Guys showed fastest growth
26.01
The Day Before loses its page on Steam. Developer cites trademark complaint
25.01
125 games industry professionals from 85 companies attended WN Connect business event in Belgrad
24.01
Blizzard caught up in scandal. Again. This time it is all about ranking its employees
24.01
Cyberpunk 2077 quest director Paweł Sasko on game’s non-linearity: “Players expected more because of the fact how The Witcher 3 is built”
23.01
Key success factors for ZERO Sievert, top-down extraction shooter that generated over $1 million in its first week
23.01
Dragon Age: Dreadwolf production director Mac Walters leaves BioWare after almost 20 years
23.01
All news
Dev Interviews 28.04.2022 19:09

Solo dev Ivan Porrini on making B.I.O.T.A., a Game Boy-style metroidvania that is on the player’s side

B.I.O.T.A. is not only a charming homage to retro 4-color Game Boy titles, but also a metroidvania with some tricks up its sleeve. We spoke with Italian developer Ivan Porrini, a.k.a small bros, to discuss his gamedev journey and the process of making this project. 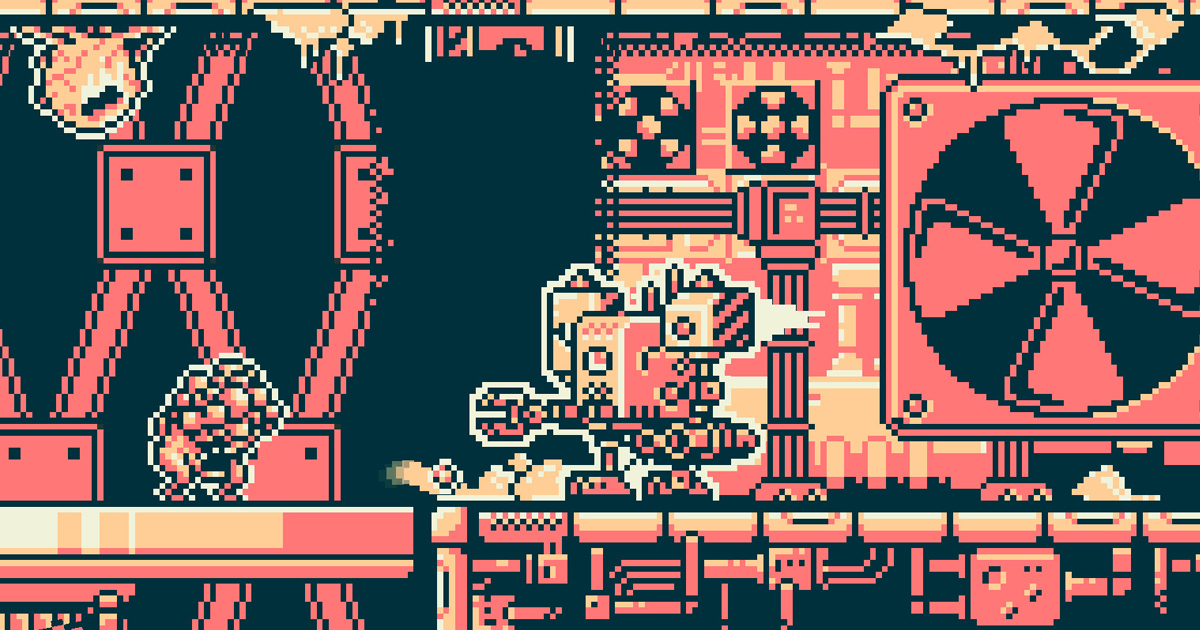 From game designer at Milestone to full-time indie developer

Before going independent, Porrini was a game designer at larger companies. Italy-based developer Milestone was one such place where he worked on racing games.

In 2015, Porrini started his one-man studio small bros, trying to combine his indie aspirations with the main job at first. Eventually, he decided to quit and become a full-time independent developer.

There is certainly a big difference between working for a company and crafting your own game at home. Porrini went through some harsh times during development and especially during the two months prior to the launch of B.I.O.T.A., but it didn’t really bother him.

“I previously worked at a larger video game studio and probably experienced a lot more stress there, both in terms of responsibility at work, but also for causes not strictly related to work, such as the daily trip to and from the office,” he notes. “Often it could take up to 2-3 hours to get home after work due to train delays or other problems. So, from my point of view, I prefer working from home on my own product, quite often until very late, but free of the frustrations and stress of an office job, which requires a lot of commitment.”

B.I.O.T.A development and challenges on the way

Prior to B.I.O.T.A., small bros released his first indie game, Ghostly Matter, a metroidvania about a ghost-busting professor in search of his old friend. Learning from this experience, Porrini decided to stick with the genre for his next project but add a few twists to it.

The whole development of B.I.O.T.A. took him about two years. “I’ve created practically everything, except the music, which was made by the musician I collaborate with,” small bros says. 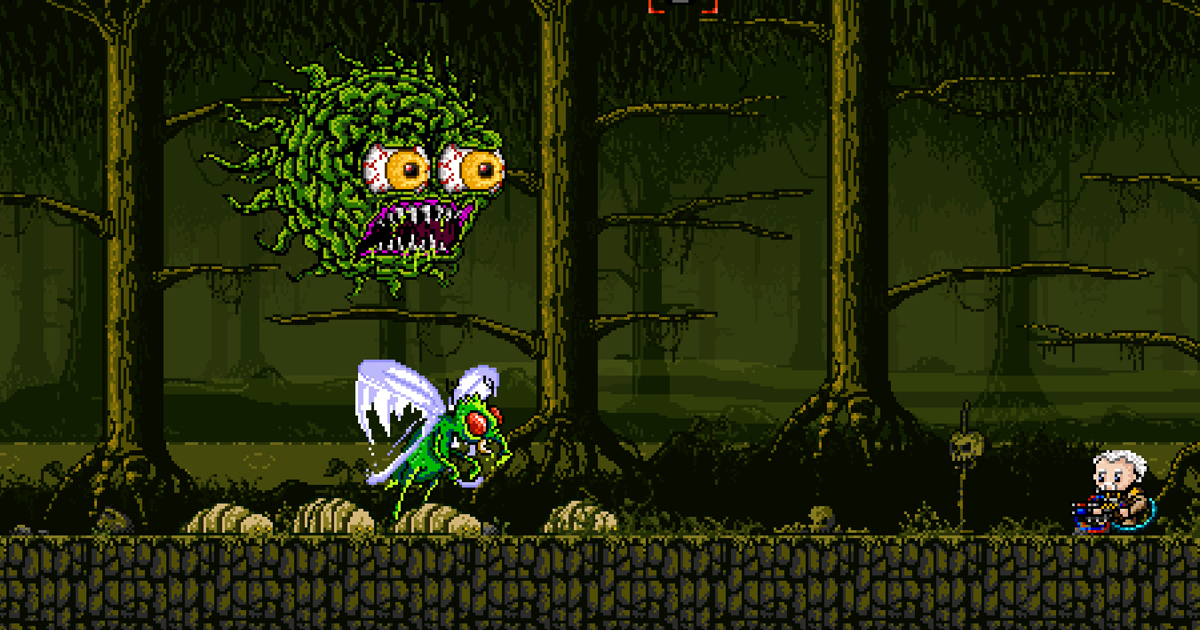 The game is built with Construct 2, a 2D video game engine heavily focused on visual programming and aimed at small indie developers. Porrini also used Photoshop for the graphics and Bfxr for the sound effects.

With this set of tools, small bros managed to create a very particular visual style serving as a sweet homage to retro Game Boy games. However, this 4-color style wasn’t part of the original concept.

“One day I said to myself: I’m creating a 4-color game, so it would be nice to give the player the ability to customize their visuals to look like Game Boy or have a more neon look,” Porrini recalls. “Since there are always only 4 colors on the screen, it wasn’t difficult to add many to the list.”

As for his work processes, small bros always starts with a mockup that defines the game’s aesthetics. “I insert characters, the title, and a small portion of the environment,” he says. “This later serves me as a style guide. Once this is done, the development is more of a mechanical process that involves creating all the situations and features I have foreseen, one at a time.”

However, there were still challenges along the way, such as drawing large images for cutscenes or portraits: “These two activities take me more time than I’d hoped for,” Porrini says, adding that there are also many problems in game development that you only discover when they arise.

“Here are some examples: including the Chinese fonts and words, changing real-time command prompts according to the input device the player is using, trying to differentiate the design and movement patterns of the enemies as much as possible, and other difficulties related to the AI of the enemies and especially of the bosses,” small bros explains.

It is also worth noting that B.I.O.T.A. initially had a different story set on Earth in a post-apocalyptic world, with Porrini saying that he had only two characters instead of eight. “I wasn’t sure if I could get that atmosphere right, so I moved the story into a ‘70s sci-fi b-movie style, which was a genre in which I could progress with more confidence.”

small bros always wanted to take various gameplay features, styles, and genres, and combine them into something new within one game. And it looks like he managed to achieve this goal with B.I.O.T.A.

Besides the visuals, which earned small bros a lot of praise on Twitter and resulted in good wishlist numbers, there are a few other things that are special about B.I.O.T.A.

While the game is metroidvania at its core, it is not extremely difficult and, as Porrini says, wants to be on the side of the player, unlike many titles of this genre. 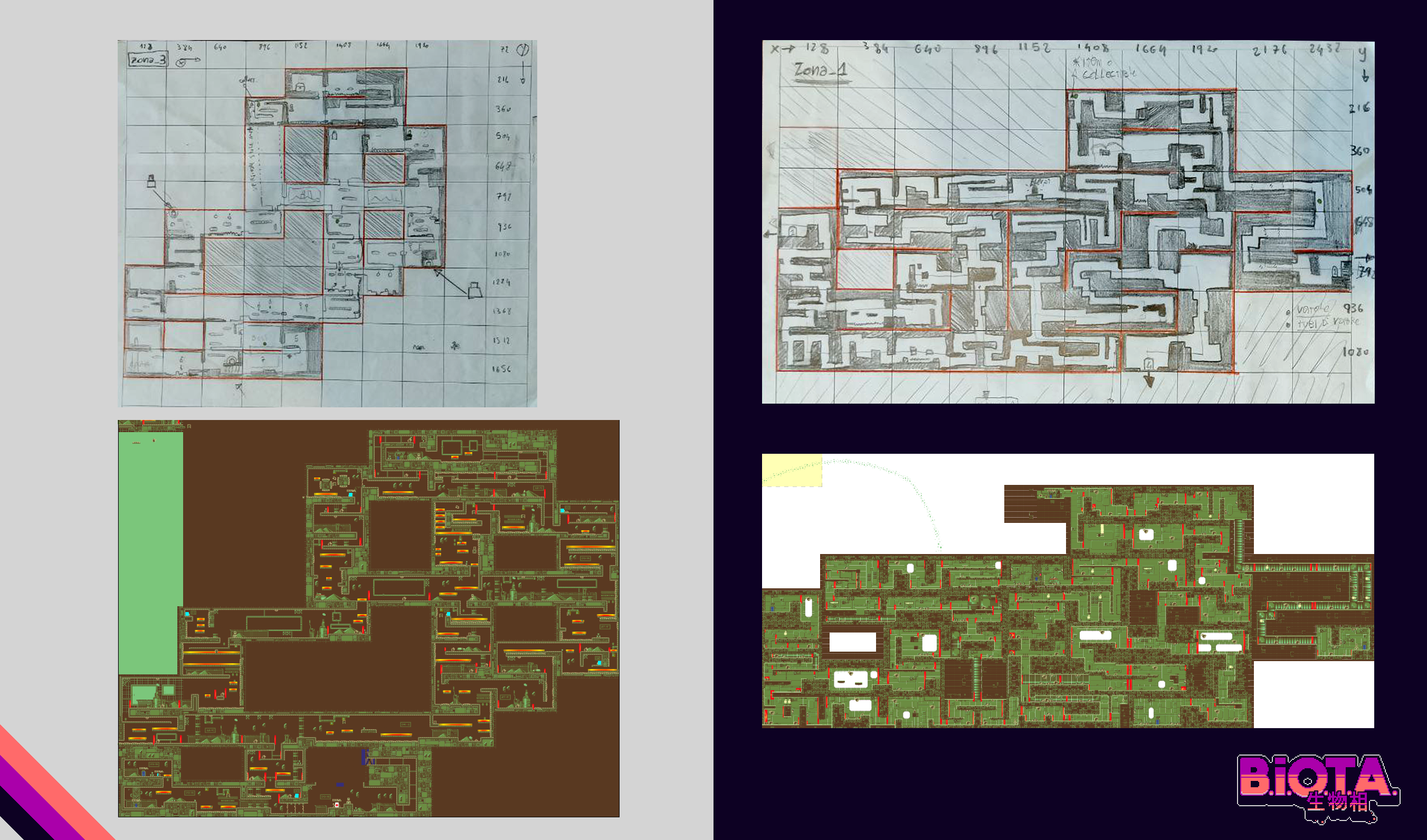 Examples of the game’s level design

“The idea was to create a metroidvania that could be played in a more linear fashion than a classic MV and focused more on the action and shooting instead of exploration,” small bros explains. “I also experimented with character upgrades by splitting most of the weapons and skills by multiple characters and enabling most of them from the start of the game.”

Another important feature, according to Porrini, is the variety of gameplay types. The core loop revolves around platforming and shooting, but there are several situations where the gameplay changes drastically, making the player face mini-games within the main game.

Finally, players can customize the graphics using three parameters, with the color palette certainly being the most important one. “It’s a feature that has already been seen in other games, but here it has a much larger scale than any other game that I have seen,” Porrini notes.

The first results and glimpse into the future

Since Porrini knows nothing about marketing and hasn’t gathered a strong community around him yet, he had to rely on someone with expertise in this area. That’s why he approached publisher Retrovibe, which helped increase B.I.O.T.A.’s  visibility prior to launch.

“It was very interesting to work together, also having a team of professionals to work with gives you the idea that you are doing something serious and not just being a crazy person doing a hobby,” small bros explains. “It helps you to maintain focus and motivation throughout the development process.”

With the help of Retrovibe, Porrini managed to get some attention from media and influencers, who praised B.I.O.T.A. The community reception has also been great so far, with the game now having 87% positive reviews on Steam.

“Even the negative comments have constructive feedback that shows me how I can further improve the game,” Porrini says, adding, “The sales numbers are within what me and my publisher expected, and people keep adding B.I.O.T.A. to their wishlists to pick it up later on, maybe during a sale.”

small bros plans to work on additional content for B.I.O.T.A. for a couple more months and take some rest to “recharge and regenerate.” After that, he’ll start working on his next game, saying that he has already prepared the first mockups for it.