John Carmack on video game preservation and why companies suffer more harm by destroying something dear to players
06.02
Jeff Gaimon on expanding EA Originals beyond just indie games: “It’s like a menu. It depends on what devs want”
06.02
Microsoft’s chances of clearing Activision Blizzard deal in US and Europe to fade away if UK watchdog decides to block it
06.02
It Takes Two hits 10 million unit sold. “Nobody expected this,” says Josef Fares
03.02
Over 1 million Chinese players apply for refunds due to expiration of Blzzard’s agreement with NetEase
03.02
NCSoft West lays off 20% of employees as part of ‘global realignment’
03.02
Organic discovery and app store featuring to be declared dead in 2023, according to Deconstructor of Fun
02.02
Dwarf Fortress made $7.2 million in January, 44 times more than in all of 2022
02.02
PlayStation reports 53% Q3 revenue growth, driven by strong sales of consoles and third-party games
02.02
Tenjin and GameAnalytics release Q4 Hyper-Casual Games Benchmark Report
01.02
All news
Industry News 24.01.2022 18:45

More than 11k games released on Steam in 2021, with 30 titles coming out daily

Data platform VG Insights has shared a new report on the number of new games released on Steam in 2021. The store set a new record, thanks to three dozen titles launched there every single day.

Last year, Steam welcomed 11.7k games, which is almost two thousand titles more than in 2020. Most of these titles, however, are still small hobby or shovelware projects, VG Insights reported.

27% of games released on Steam last year sold less than 100 copies, with only 8% of all new titles reaching 10k units sold or more. 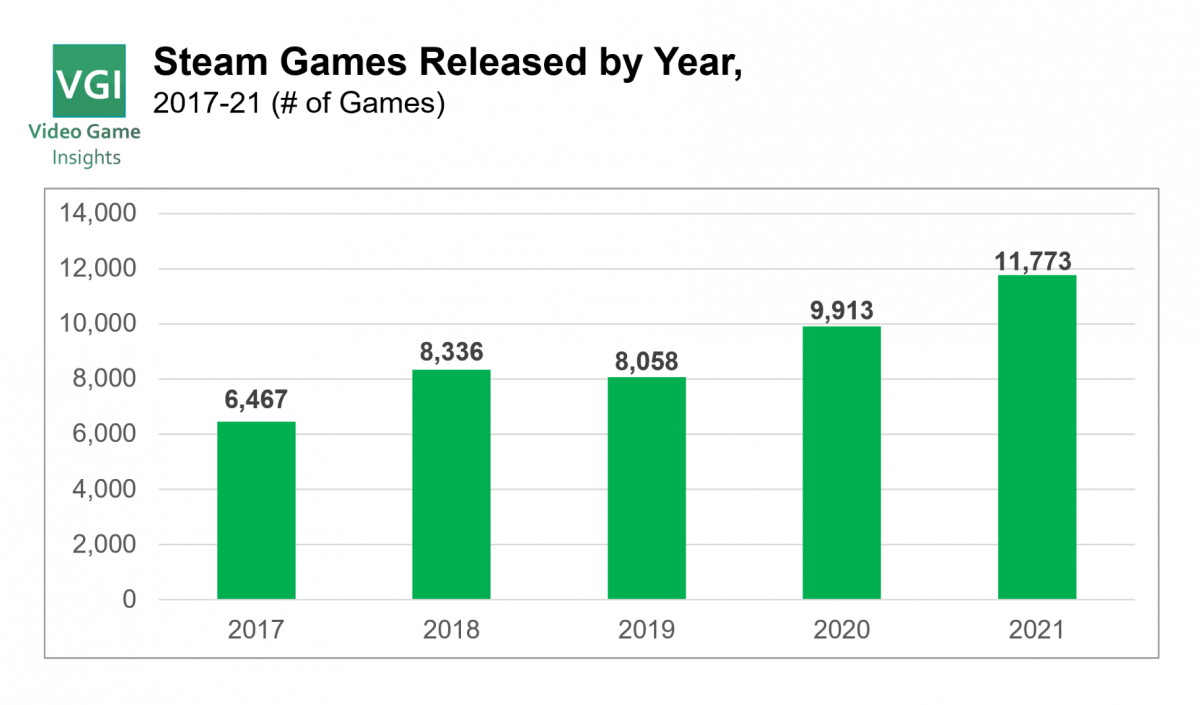 Steam remains a mecca for indie developers as indie games account for 98% of all titles released on the store last year. And their share grows with each year. According to the data shared by VG Insights, there were only around 200 new AA or AAA games launched on Valve’s platform in 2021.

Although the majority of titles on Steam are self-published, the picture looks drastically different if we look at only those games that reached 500+ copies sold. Most of these projects are launched with the help of third-party publishers. 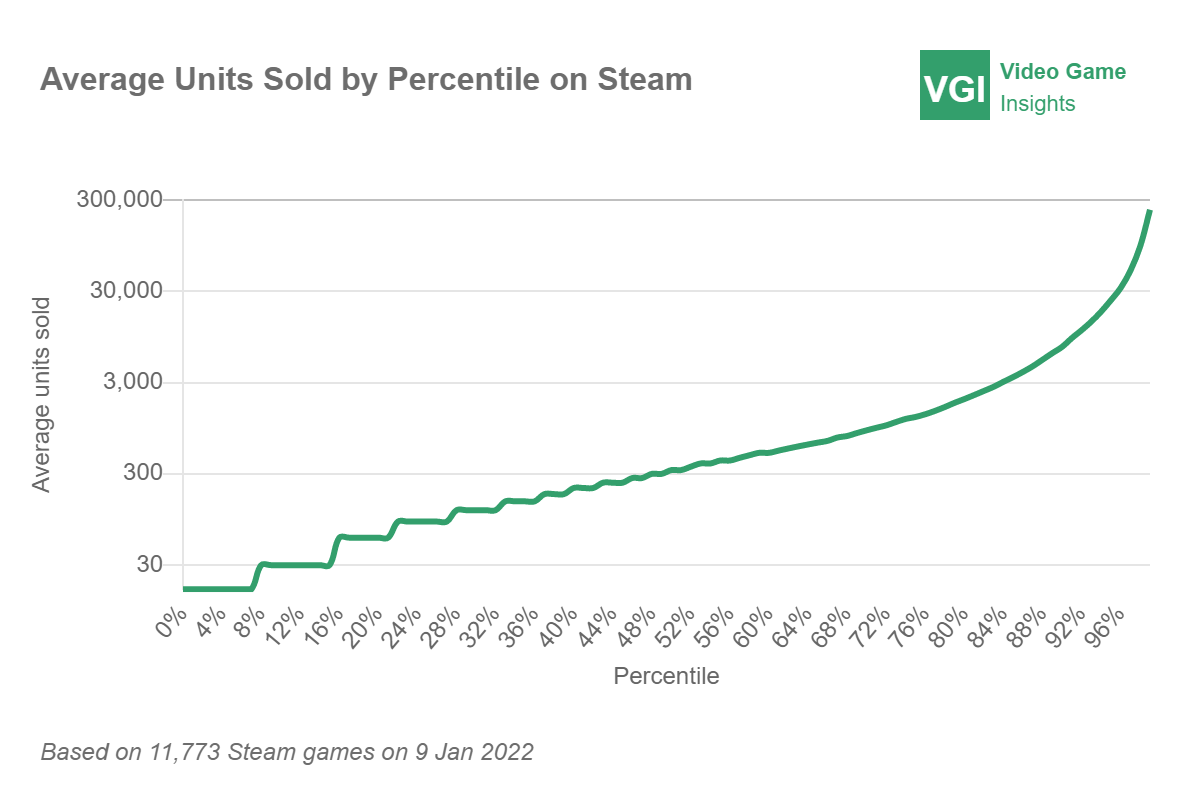 COVID-19 had a huge impact on the games industry. The number of games released by AA and AAA studios almost halved since the beginning of the pandemic. However, they finally managed to adapt to the new reality last year, with a number of new titles released every quarter going back to the pre-pandemic levels (around 40-50 new games come out per quarter). 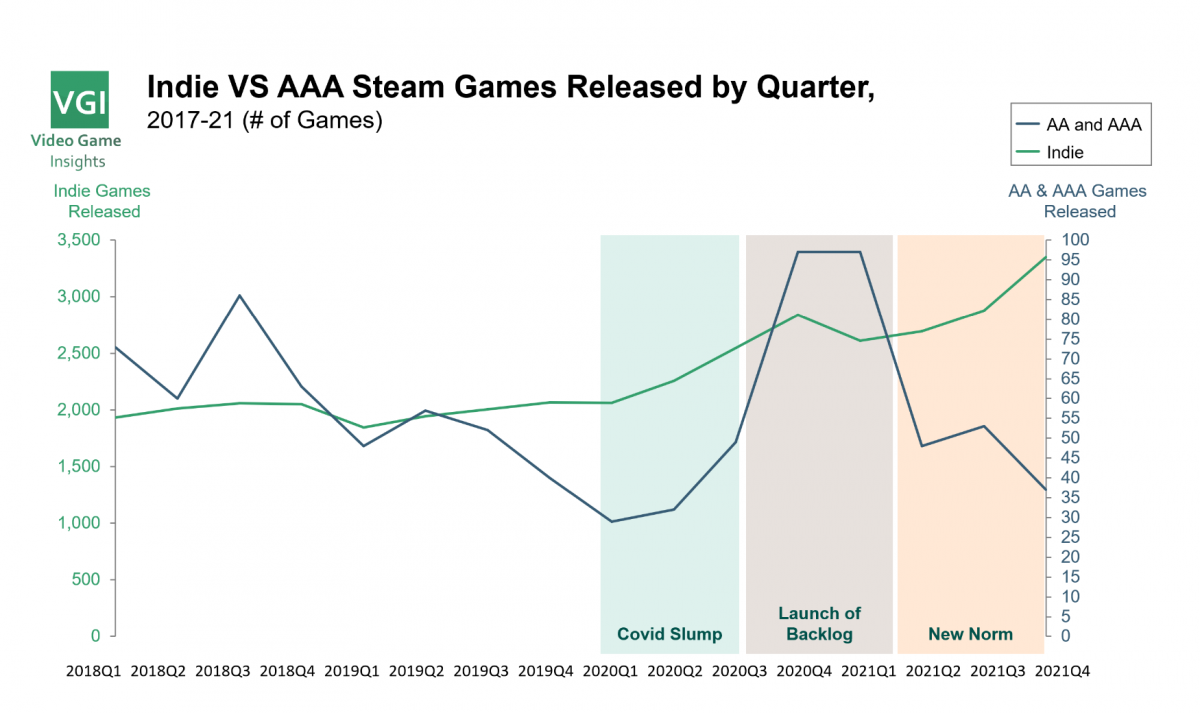 The overall number of new titles, however, has grown since the beginning of the pandemic. 3350 new games were launched during Q4 2021, which is 68% more than pre-covid.

The full report by VG Insights can be found here.