Chris Zukowski: Steam can only promote up to around 500 indie games per year
30.01
Wargaming top manager called a terrorist by KGB Belarus
30.01
AI USE CASE: How a mobile game development studio saved $70K in expenses
27.01
Sensor Tower: Subway Surfers was most downloaded game in Q4 2022, but the Stumble Guys showed fastest growth
26.01
The Day Before loses its page on Steam. Developer cites trademark complaint
25.01
125 games industry professionals from 85 companies attended WN Connect business event in Belgrad
24.01
Blizzard caught up in scandal. Again. This time it is all about ranking its employees
24.01
Cyberpunk 2077 quest director Paweł Sasko on game’s non-linearity: “Players expected more because of the fact how The Witcher 3 is built”
23.01
Key success factors for ZERO Sievert, top-down extraction shooter that generated over $1 million in its first week
23.01
Dragon Age: Dreadwolf production director Mac Walters leaves BioWare after almost 20 years
23.01
All news
Events 28.09.2021 14:21

WN Moscow’21 to feature talks from Playrix, Nexters, SayGames, SberGames, and others

WN Moscow’21 will be held Oct 13-14. Held in the hybrid format, the event will allow participants to discuss the latest news, share expertise, and attend industry talks both on-site and online. 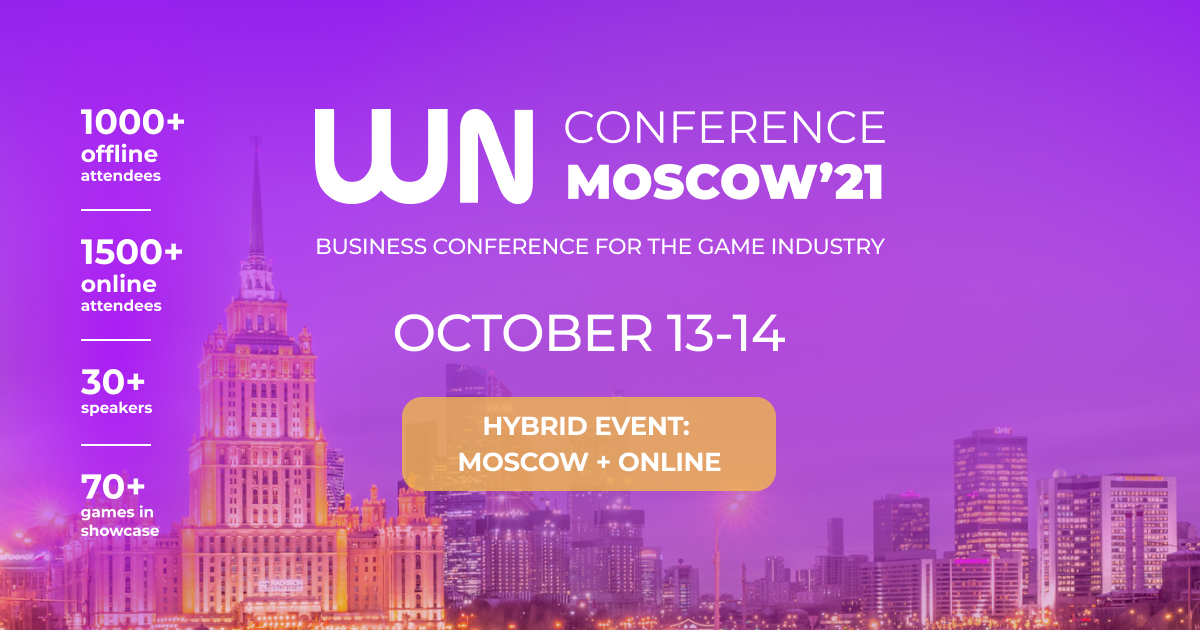 Following the pandemic-induced break, the WN Conference (formerly known as White Nights) is returning to Moscow. Over 1,000 on-site and 1,500 online attendees are expected to participate in the event. All the guests will be connected via business communication platform WN Hub.

There will be two conference tracks, with 30 talks planned in total. For now, the program is still being finalized — new topics are being announced every day. Here are several talks that have caught our eye so far:

This fall, War Robots got its remastered version. The developers fully updated the graphics. Dima Osipov, Lead Project Manager, will explain how it affected the title’s metrics.

Turn-based isometric title Encased came out on Steam this September. The game follows the classic CRPG formula and uses premium monetization. How did the developers start earning money off the title even before its release? Artem Korovkin, COO of Dark Crystal Games, will take the stage to explain.

Arabic is one of the most widely used languages in the world. However, games are rarely translated into Arabic. Hussam Hammo, CEO of Jordan-based mobile games publisher Tamatem Games, believes it is short-sighted at best.  The region is home to the highest ARPPU in the world. Publishing the right type of game in the MENA market can be miraculous in terms of revenues.

Another highlight of the conference is the Legal in Games track supported by law firm Semenov & Pevzner. Over its four hours, legal professionals will discuss copyright, trademarks, patent rights, and other legal issues in the context of the video games industry.

WN Moscow’21 will also feature talks from Playrix, Nexters, SayGames, Belka Games, and SberGames. Besides that, talks are expected from Azur Games, AppQuantum, Dankolab, The Games Fund, MY.GAMES Venture Capital, and other companies active in the video games market.

As usual, WN Moscow’21 will have the Developer Showcase. The organizers expect over 70 teams to present their projects to investors and publishers.

You can get your tickets here. The price starts from €50 for devs and publishers and €500 for service providers (companies not involved in the development and/or publishing).