Tenjin and GameAnalytics release Q4 Hyper-Casual Games Benchmark Report
01.02
Chris Zukowski: Steam can only promote up to around 500 indie games per year
30.01
Wargaming top manager called a terrorist by KGB Belarus
30.01
AI USE CASE: How a mobile game development studio saved $70K in expenses
27.01
Sensor Tower: Subway Surfers was most downloaded game in Q4 2022, but the Stumble Guys showed fastest growth
26.01
The Day Before loses its page on Steam. Developer cites trademark complaint
25.01
125 games industry professionals from 85 companies attended WN Connect business event in Belgrad
24.01
Blizzard caught up in scandal. Again. This time it is all about ranking its employees
24.01
Cyberpunk 2077 quest director Paweł Sasko on game’s non-linearity: “Players expected more because of the fact how The Witcher 3 is built”
23.01
Key success factors for ZERO Sievert, top-down extraction shooter that generated over $1 million in its first week
23.01
All news
Industry News 02.08.2021 15:28

Since around 2014, devs and publishers have been using the number of reviews to estimate how many units any Steam game has sold. Market research and industry insights platform Video Game Insights looked into the review-to-sales ratio of over 10,000 Steam games and found out how it has changed over time.

Steam reviews have been a fairly accurate estimate for units sold, as proved by Jake Birkett, Simon Carless and others. However, Video Game Insights has found that different review multipliers should be used depending on the year a game came out.

For example, for games released before 2014, a reasonable proxy for units sold was 80 times the game’s total reviews. Right now, it is closer to 30 times.

The multiples have been changing partly in response to various tweaks to Steam’s UX, such as Steam starting to actively ask users to leave a review for a game they bought.

Below is a graph featuring review multipliers to use for the units sold estimate for Steam games by year of release. 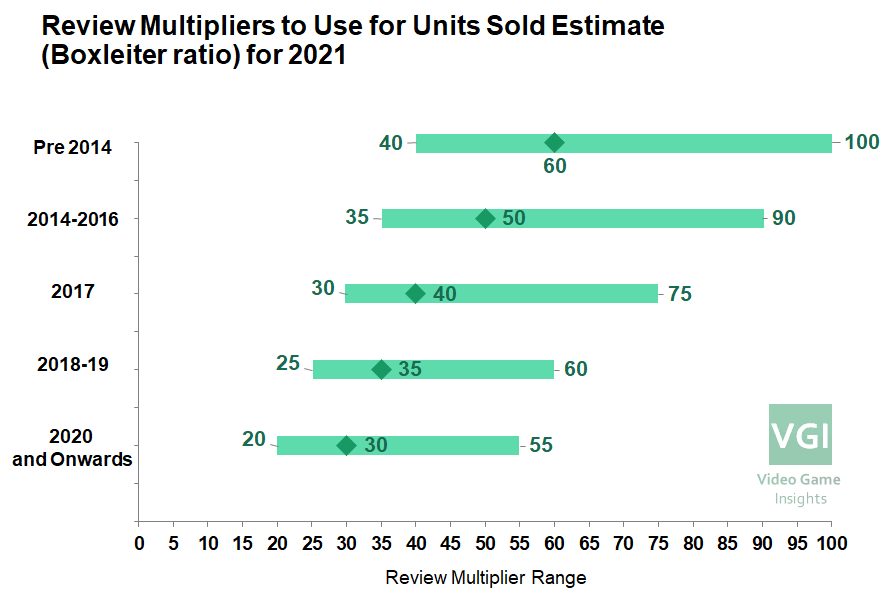 Video Game Insights explains that “it lays out the range of multiples you should use as a proxy for games by year of release as well as the ‘best guess’ multiple to be used (the green diamond).”

“For example, Valheim, released in 2021, has 255k reviews on Steam at the point of writing this,” the analysts add. “Using the 20-55x review multiple range, we know they’ve sold between 5-14m units up to date. If we want to put a number to it, we’d use the 30x multiple – resulting in 7.7m units sold.” And this is pretty close to Valheim‘s reported 6.8m unis sold by the end of May.

This method will always have outliers. Moreover, genre and pricing impact should be factored in. But the provided ranges are accurate for over 80% of the games sutdied, according to the analysts. The platform plans to release further updates on the method in the months to come.

More information on the methed can be found in the original post by Video Game Insights.