Tenjin and GameAnalytics release Q4 Hyper-Casual Games Benchmark Report
01.02
Chris Zukowski: Steam can only promote up to around 500 indie games per year
30.01
Wargaming top manager called a terrorist by KGB Belarus
30.01
AI USE CASE: How a mobile game development studio saved $70K in expenses
27.01
Sensor Tower: Subway Surfers was most downloaded game in Q4 2022, but the Stumble Guys showed fastest growth
26.01
The Day Before loses its page on Steam. Developer cites trademark complaint
25.01
125 games industry professionals from 85 companies attended WN Connect business event in Belgrad
24.01
Blizzard caught up in scandal. Again. This time it is all about ranking its employees
24.01
Cyberpunk 2077 quest director Paweł Sasko on game’s non-linearity: “Players expected more because of the fact how The Witcher 3 is built”
23.01
Key success factors for ZERO Sievert, top-down extraction shooter that generated over $1 million in its first week
23.01
All news
Industry News 16.12.2020 17:20

In June 2019, miHoYo published a promo video for its new game — Genshin Impact. In September 2020, the game came out and dominated charts right away. Fiona Long of SocialPeta breaks down advertising and promotion strategies that made Genshin Impact an immediate success. 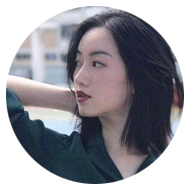 Let‘s review the market performance of the game over the past few months.

Leveraging its development experience from Honkai Impact 3, miHoYo has ensured the superb quality of Genshin Impact. A successful game, though, should not only rely on high-quality graphics or gameplay. It should also make good use of advertising and promotion strategies.

In this article, we are going to use ad intelligence tool SocialPeta to make a comprehensive analysis of Genshin Impact‘s marketing strategies from the following three sections:

The figure below shows the media buy trend of Genshin Impact in the past half-year. We can see the trends of advertising launched by Genshin Impact at a specified time and the proportion of material type. For example, on November 23, the video materials accounted for 48.96% of the total amount, and the Images was 37.15%

In addition, in SocialPeta’s Advertiser Analysis, you can also view detailed data such as Ad Copy, advertising duration, the number of total ads, etc. 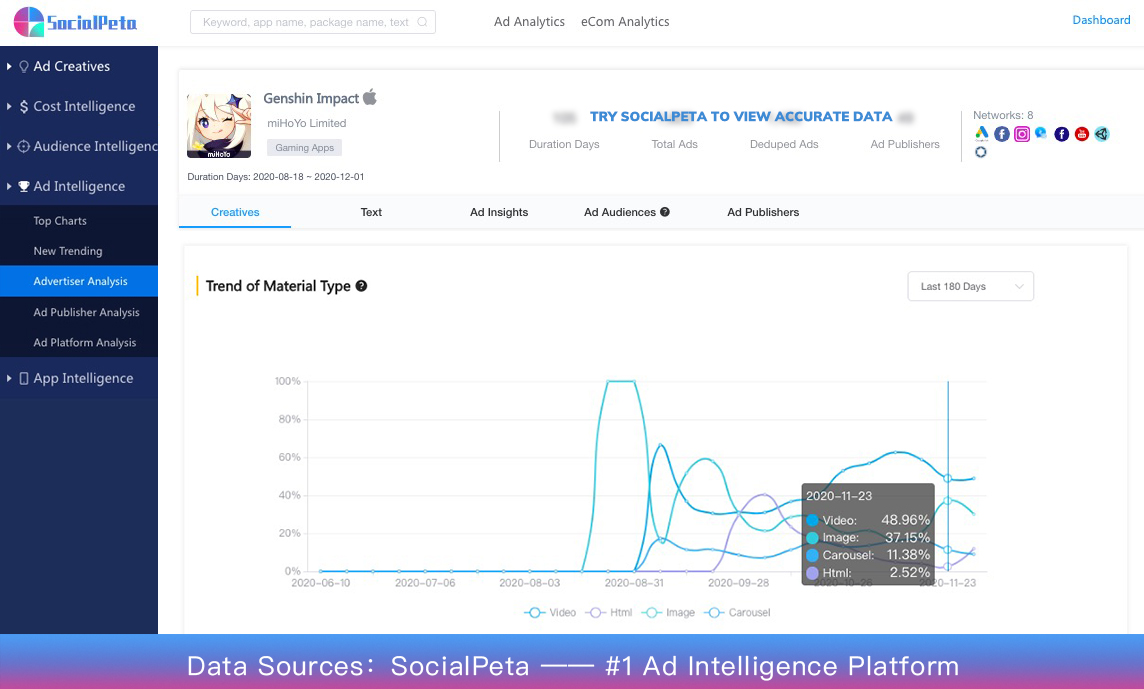 Let’s take a look at Genshin Impact‘s Advertising trends in recent months from SocialPeta. We can see that a significant increase in creative magnitude occurred on Sep. 7, Sep. 25, and Nov. 3, which corresponds to a few key events of the game, according to our online data inquiry.

Genshin Impact scheduled its PC public beta for September 15, the earliest launch of all versions, and initiated the first wave of advertising on September 7 (a week ahead), to warm up for the official launch. Most of the creatives during this period mainly lead up to registration on mobile.

Genshin Impact started public beta testing on all platforms on September 28, ushering in the second wave of advertising. SocialPeta fetched more than 400 pieces of creatives for the iOS version of Genshin Impact in a single day.

The latest climax of advertising occurred on October 30, when Genshin Impact released the 1.1 version update, enriching the main storyline and characters. During the two weeks after the new version was released, Genshin Impact continued to carry out advertising. Combined with the new main storyline and characters, they can create more video materials that show the gameplay to attract players. So most of the creatives during this period are mainly in the form of video. 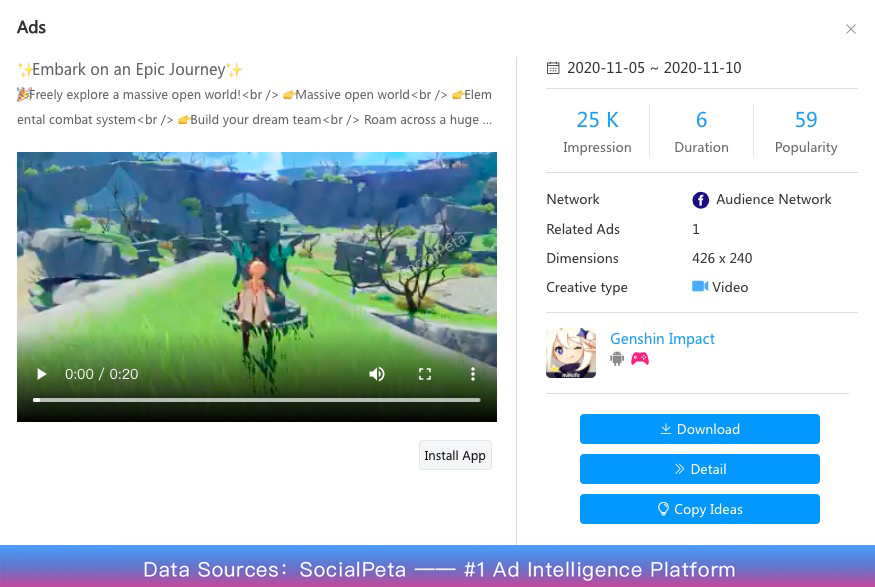 Through SocialPeta’s Advertising Channel Analysis, we can gain insight into the proportion of the game’s placement on various advertising platforms. The simple-looking data chart is supported by the massive database of SocialPeta, which is fetched from 73 top publishing networks across 46 countries. The entire database contains more than 980M creatives. 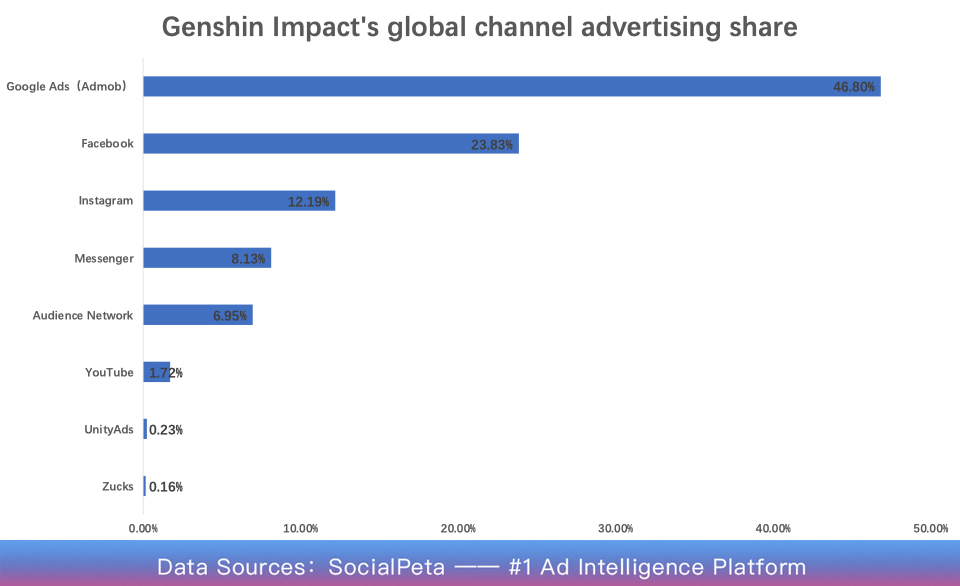 What followed was placement of more creatives on FB networks to ensure long-term, stable exposure. 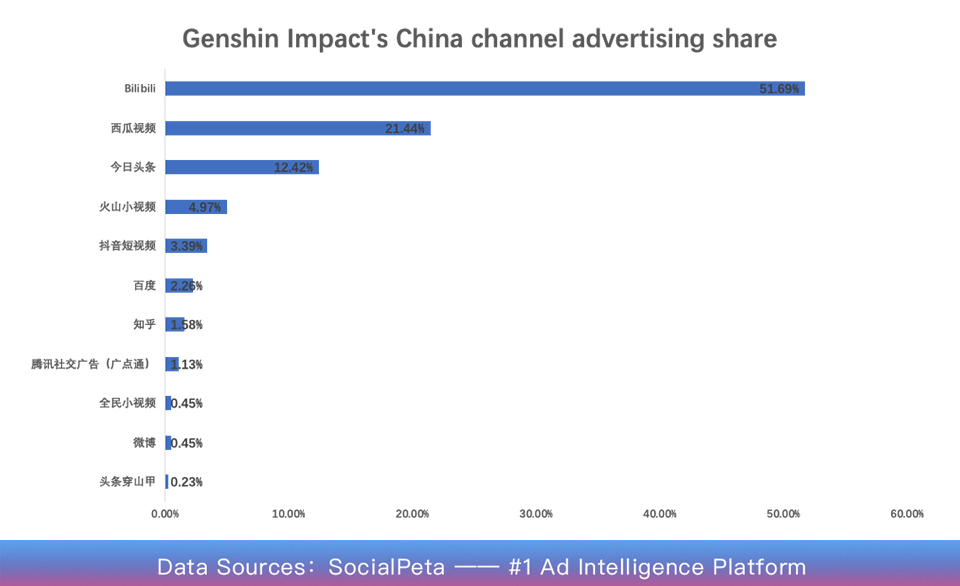 In China, Genshin Impact chooses Bilibili as its primary network of advertising with more than 50% of its creatives placed there. As China’s biggest ACGN (Anime, Comic and Games) community, Bilibili abounds with young players fond of ACGN culture.

In SocialPeta’s Ad Creative Analysis, you can find any ad you want filtering them by category, network, ad format, language, date, CTA type, marketing objective, etc. To explore creatives in a designated region, here we will use the region filter. The following search results show the creatives of Genshin Impact in Japan: 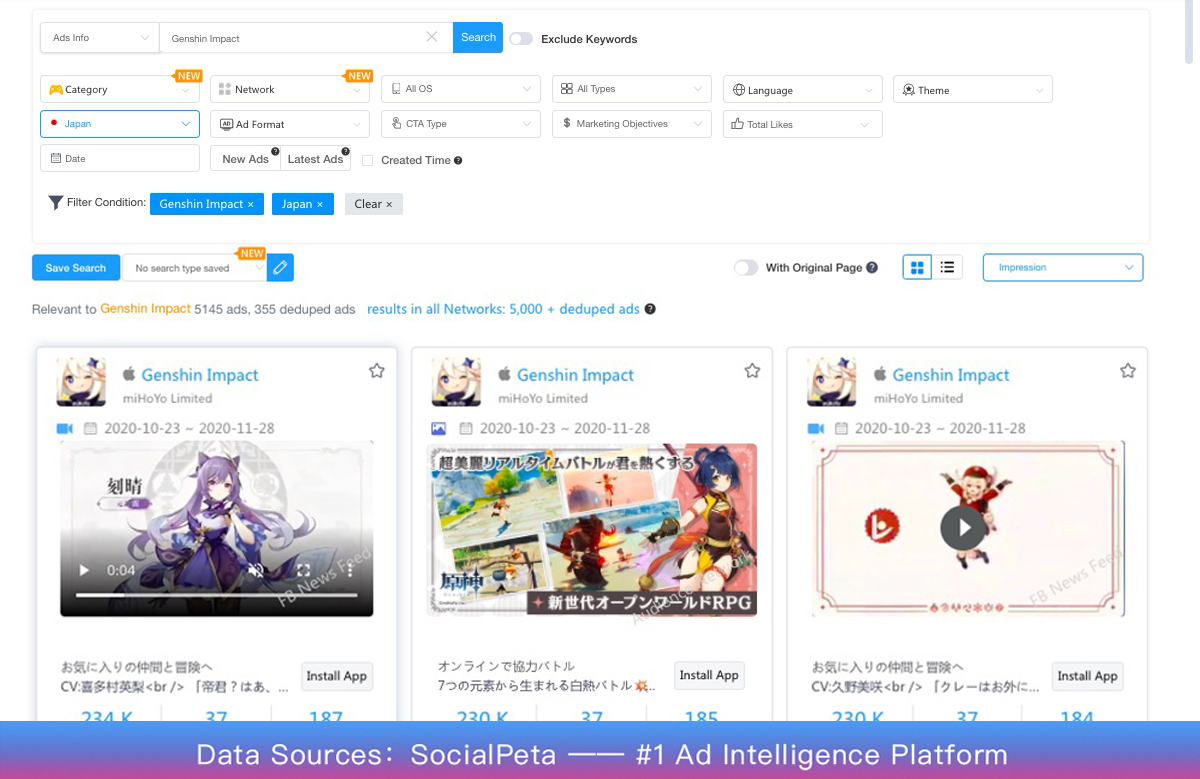 From the ad search results, we found the following differences in different regions： 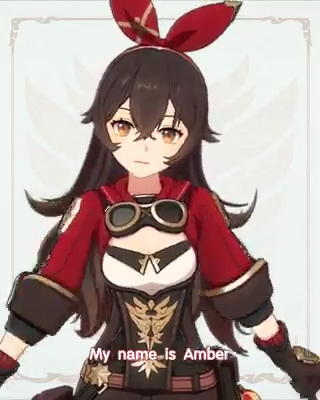 Gamers in Asia prefer Lolita. The hottest creative in China is the cute zombie Lolita Qiqi. 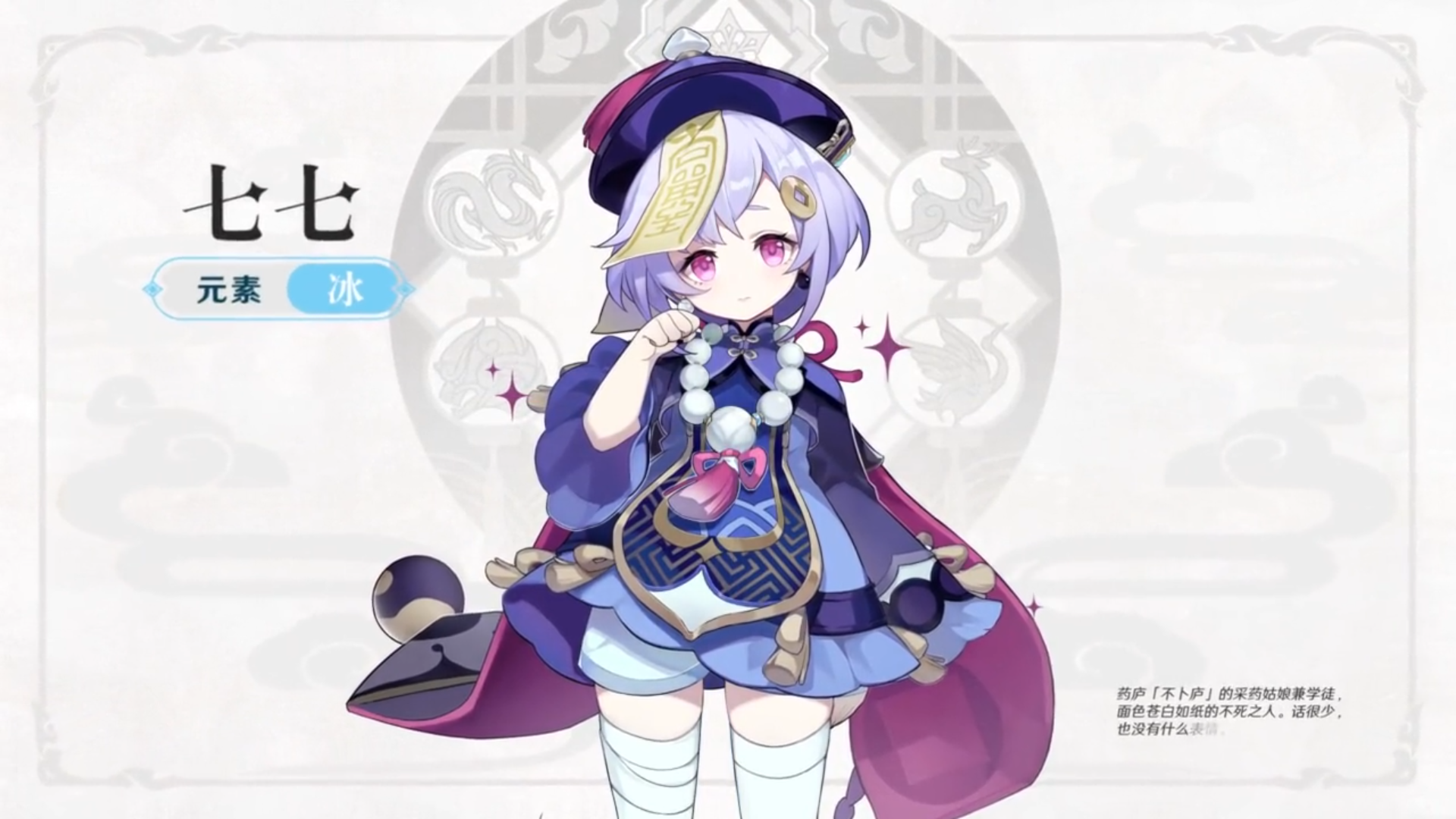 In addition to customized ads for the different regions mentioned above, there are also giant boss ads specifically for hardcore players. 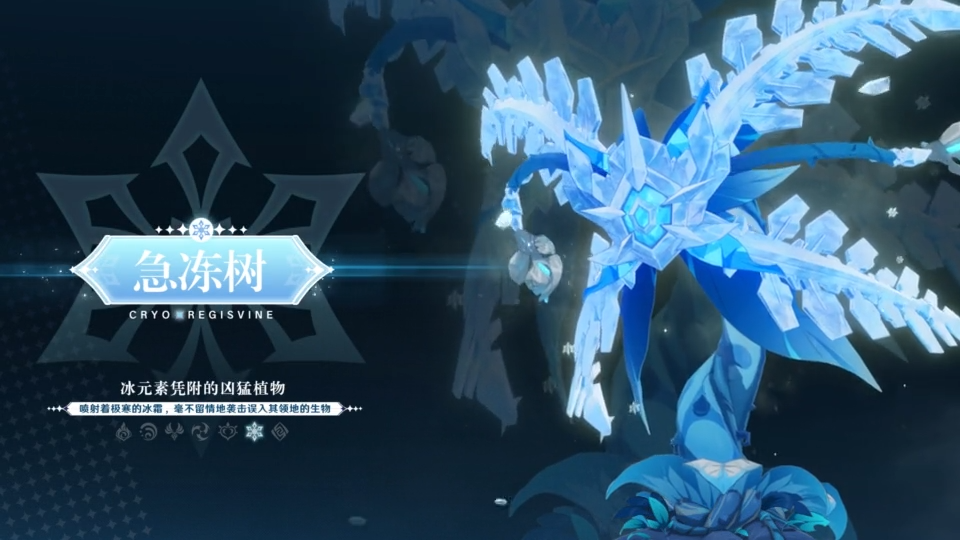 As an ARPG, a giant-sized boss is indispensable to Genshin Impact. The super-high tension and seemingly unbeatable enemies in boss battles are what make ARPGs uniquely charming.

Genshin Impact’s global success has awakened more gaming companies to the infinite commercial value of ACGN mobile games. Meanwhile, the superb performance is down to its effective marketing and advertising strategies. Developing and launching a game is only the beginning. It should stand out from the crowd and persuade the users to download.

If you’re thinking of launching a new game, SocialPeta can save you thousands of hours of research. All you need to do is to search for your competitors, find their strategy, explore millions of inspirations to build your own marketing plan.