Why Apex Legends Mobile got shut down despite being EA’s sixth highest-grossing mobile game in 2022
21:14
Nintendo announces 10% pay raise for all Japanese employees to drive long-term growth
16:31
Activision Blizzard posts record quarterly bookings on Blizzard’s strong growth and Call of Duty blockbuster sales
14:21
Microsoft’s chances of clearing Activision Blizzard deal in US and Europe to fade away if UK watchdog decides to block it
13:01
John Carmack on video game preservation and why companies suffer more harm by destroying something dear to players
06.02
Jeff Gaimon on expanding EA Originals beyond just indie games: “It’s like a menu. It depends on what devs want”
06.02
It Takes Two hits 10 million unit sold. “Nobody expected this,” says Josef Fares
03.02
Over 1 million Chinese players apply for refunds due to expiration of Blzzard’s agreement with NetEase
03.02
NCSoft West lays off 20% of employees as part of ‘global realignment’
03.02
Organic discovery and app store featuring to be declared dead in 2023, according to Deconstructor of Fun
02.02
All news
Industry News 24.10.2019 15:52

Despite Gears 5’s successful release, in general, July-September was not the best period for the Microsoft gaming division.

Yesterday, on October 23, Microsoft released its results for the first fiscal quarter of 2020. It fell on the third calendar quarter of 2019.

According to the published data, in July-September, Microsoft made $2.54 billion on games. This is $196 million less than the company earned over the same period a year earlier (7% down from last year). 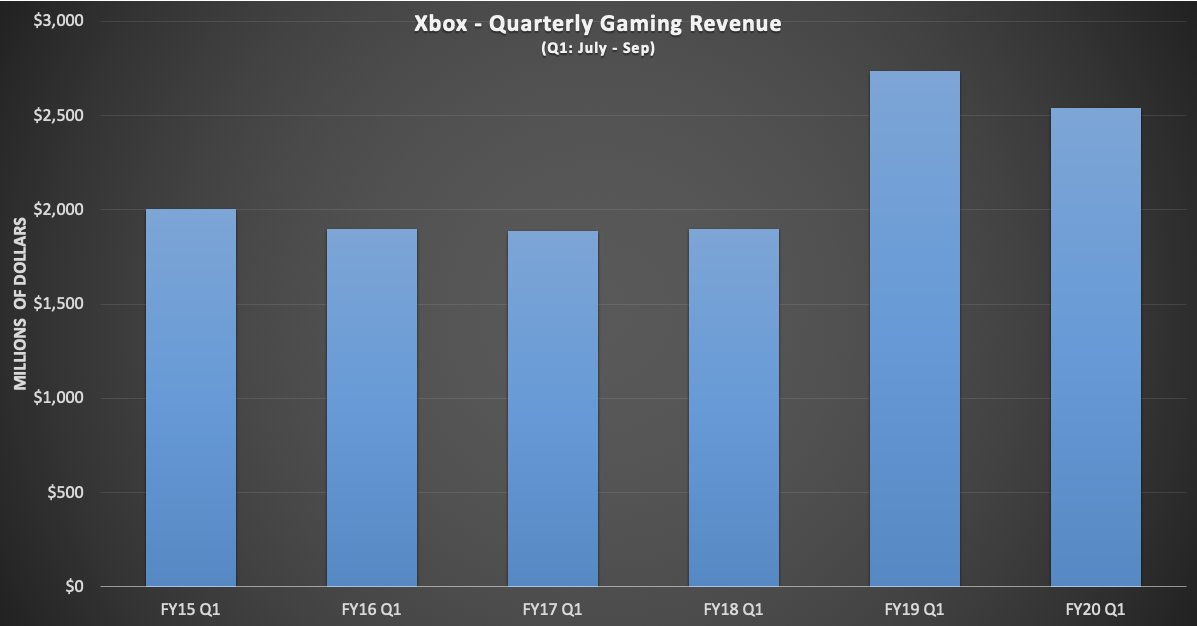 The total of $2.54 billion includes revenues from Xbox hardware sales, console and PC games, Xbox Live microtransactions, subscriptions, cloud services payments, advertising and royalties from third-party teams (for example, Microsoft is getting 30% of every microtransaction in Fortnite made on Xbox One).

Microsoft mostly attributes this decline to a 34% decrease in the number of consoles sold. As market analyst Daniel Ahmad notes, this should not come a surprise as the time of the current generation of consoles is drawing to a close.

On a more optimistic note, revenues from content and services remained flat year-on-year, according to Microsoft. This is all the more healthy since Fortnite and other IAP games brought in lower revenues for Microsoft this year, Ahmad says. In fact, Xbox software and services revenue was up 1% year-on-year, indicating an increase in Xbox Live and Xbox Game Pass subscriptions.

The Gears 5 release also helped. The game became one of the biggest hits of Xbox Games Studios on the current generation of consoles. 3 million people played Gears 5 during its launch week.