Tenjin and GameAnalytics release Q4 Hyper-Casual Games Benchmark Report
01.02
Chris Zukowski: Steam can only promote up to around 500 indie games per year
30.01
Wargaming top manager called a terrorist by KGB Belarus
30.01
AI USE CASE: How a mobile game development studio saved $70K in expenses
27.01
Sensor Tower: Subway Surfers was most downloaded game in Q4 2022, but the Stumble Guys showed fastest growth
26.01
The Day Before loses its page on Steam. Developer cites trademark complaint
25.01
125 games industry professionals from 85 companies attended WN Connect business event in Belgrad
24.01
Blizzard caught up in scandal. Again. This time it is all about ranking its employees
24.01
Cyberpunk 2077 quest director Paweł Sasko on game’s non-linearity: “Players expected more because of the fact how The Witcher 3 is built”
23.01
Key success factors for ZERO Sievert, top-down extraction shooter that generated over $1 million in its first week
23.01
All news
Industry News 14.08.2019 17:52

The Independent Game Developers’ Association (TIGA) interviewed a representative 10 percent of small, medium and large UK studios. Respondents were allowed to name more than one engine of choice

Here’s how different engines ranked in the UK: 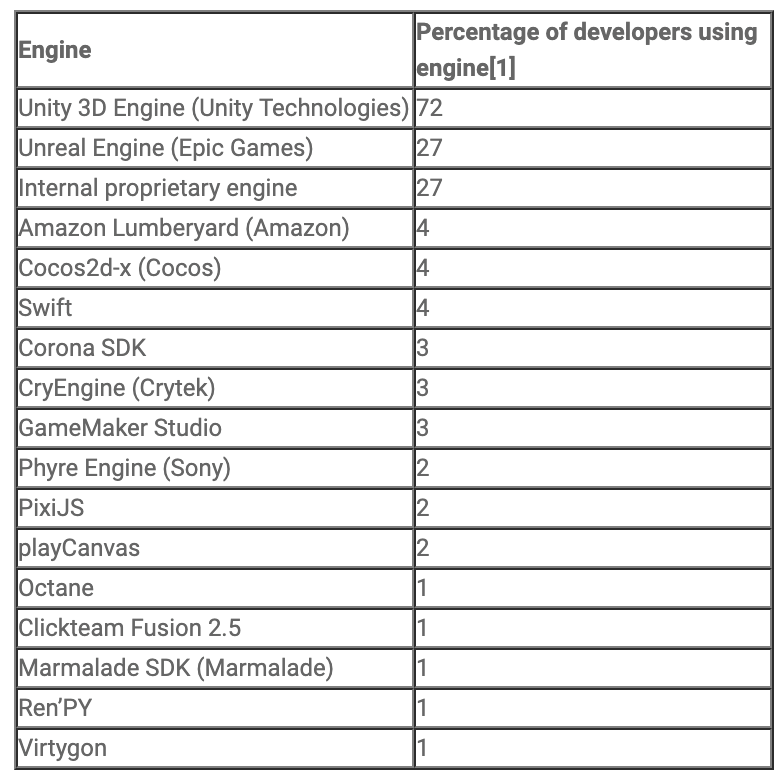 The percentage of those using proprietary engines is quite high. TIGA attributes this to several factors.

First of all, such engines are more profitable in the long run.

Whilst the initial investment in developing your own game engine is greater, the technical challenges are higher and the time to start is longer, the ongoing costs tend to be lower, the general frustration level is lower and the long-term gains are greater.

Secondly, studios initially write a game engine for their own game. It is easier to adjust it to a specific project, having full access to the source code.

Thirdly, you can use your own engine for free on the subsequent projects.

TIGA also points out that most UK studios prefer to self-publish. So when choosing among third-party engines, they gravitate towards those that best support self-publishing operations.