Why Apex Legends Mobile got shut down despite being EA’s sixth highest-grossing mobile game in 2022
21:14
Nintendo announces 10% pay raise for all Japanese employees to drive long-term growth
16:31
Activision Blizzard posts record quarterly bookings on Blizzard’s strong growth and Call of Duty blockbuster sales
14:21
Microsoft’s chances of clearing Activision Blizzard deal in US and Europe to fade away if UK watchdog decides to block it
13:01
John Carmack on video game preservation and why companies suffer more harm by destroying something dear to players
06.02
Jeff Gaimon on expanding EA Originals beyond just indie games: “It’s like a menu. It depends on what devs want”
06.02
It Takes Two hits 10 million unit sold. “Nobody expected this,” says Josef Fares
03.02
Over 1 million Chinese players apply for refunds due to expiration of Blzzard’s agreement with NetEase
03.02
NCSoft West lays off 20% of employees as part of ‘global realignment’
03.02
Organic discovery and app store featuring to be declared dead in 2023, according to Deconstructor of Fun
02.02
All news
Industry News 18.11.2020 16:27

Xsolla on budgeting your indie game

In a piece on pitching, Xsolla’s Justin Berenbaum highlights a number of budgeting considerations that indie devs should bear in mind when pitching their game to a publisher. 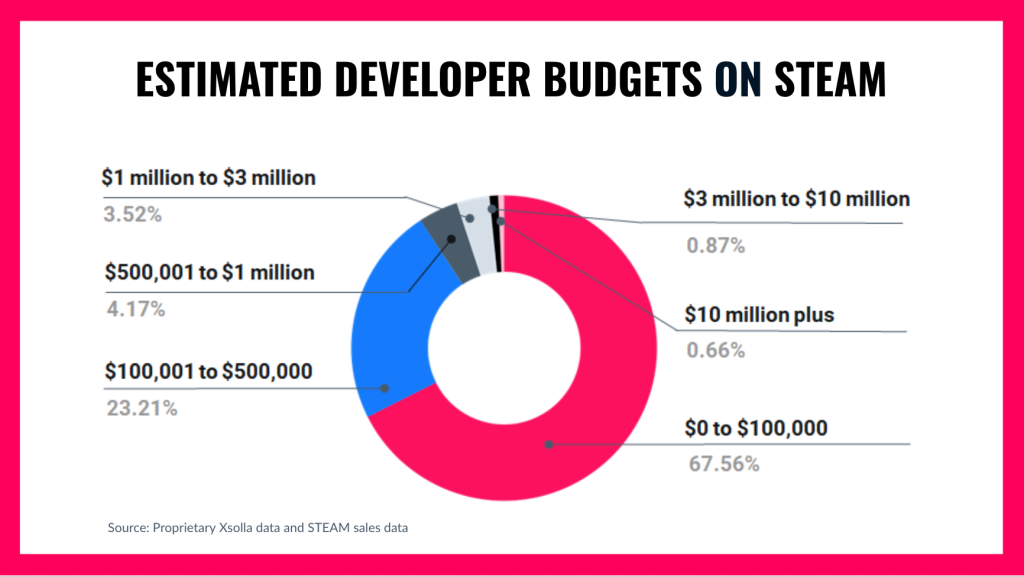 However, it’s important to note that not a lot of publisher would consider investing less than $100,000. The reason for that is that “they don’t see much return on investment with these smaller projects and the overhead “internal costs” end up being a large part of the total value of the deal.”

Typically, indie devs should consider requesting anywhere between $100,000 and $3 million. When figuring out your funding goal, it’s important not to forget about hidden costs that could add as much as 10%-20% to your proposed budget. For example, you are requesting a $500,000 budget.  If you haven’t already included QA, localization, ratings, submissions to first-parties, and external markeing, this could mean the publisher would have to invest another $100,000 to cover these expenses. This brings your indie budget to $600,000 or even $700,000 if you are assigned the following personnel:

So if you are requesting a $500,000 budget, the publisher or investor might actually have to pay between $600,000 and $700,000 to make your game. It’s also important to remember that QA, localization, ratings, and submissions costs, as well as external marketing costs are generally deducted before any royalties are paid. As for the assigned personnel costs, Berenbaum warns not to let the publisher make these costs recoupable.