John Carmack on video game preservation and why companies suffer more harm by destroying something dear to players
06.02
Jeff Gaimon on expanding EA Originals beyond just indie games: “It’s like a menu. It depends on what devs want”
06.02
Microsoft’s chances of clearing Activision Blizzard deal in US and Europe to fade away if UK watchdog decides to block it
06.02
It Takes Two hits 10 million unit sold. “Nobody expected this,” says Josef Fares
03.02
Over 1 million Chinese players apply for refunds due to expiration of Blzzard’s agreement with NetEase
03.02
NCSoft West lays off 20% of employees as part of ‘global realignment’
03.02
Organic discovery and app store featuring to be declared dead in 2023, according to Deconstructor of Fun
02.02
Dwarf Fortress made $7.2 million in January, 44 times more than in all of 2022
02.02
PlayStation reports 53% Q3 revenue growth, driven by strong sales of consoles and third-party games
02.02
Tenjin and GameAnalytics release Q4 Hyper-Casual Games Benchmark Report
01.02
All news
Industry News 20.02.2020 15:58

In China, the publicity department of Haidian District Committee has partnered with the Communist Party’s official newspaper People’s Daily and casual games developer Ohayoo, which is owned by ByteDance.

The result of this unusual collaboration is a mini-game called “Battle of Pathogens,” which came out this week. 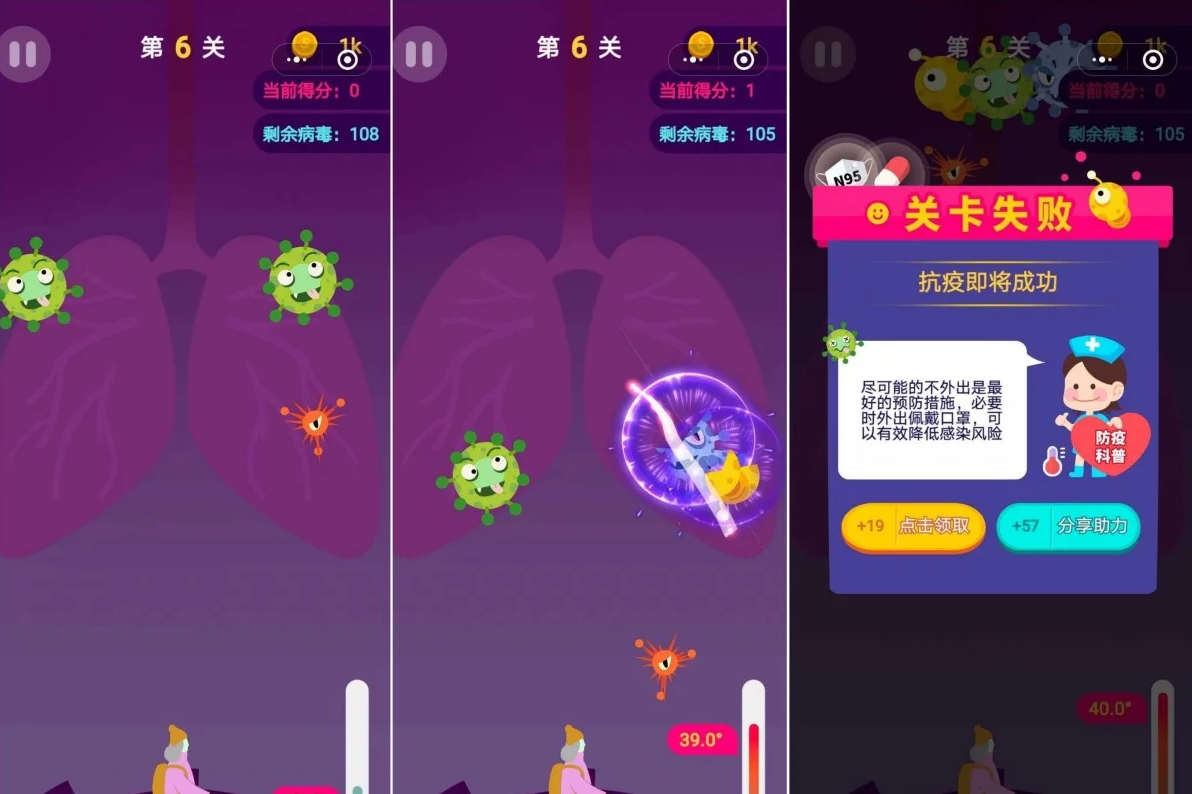 It’s a title with mechanics similar to those popularized by Fruit Ninja, except now you have to slice up viruses to stop them from entering the protagonist’s body. Viruses will respond to the player’s actions by mutating and replicating. Each round culminates in a health care tip popping up on the screen.

The project is significant from several perspectives.

First, it shows how the Chinese government continues to increase its control of the country’s gaming market. Here’s what People’s Daily said upon the release of the title: “Innovation in games is crucial to the development of the domestic game industry. At the same time, it is important to insist on good morals and social responsibility to ensure the industry is marked by positivity.” The game should help players “release stress from long-term restrictions on going out,” the newspaper added.

Second, that’s yet another game from ByteDance’s studio. The TikTok maker continues to aggressively expand into video games. To the effect, the company even appointed Yan Shou to exclusively oversee its gaming business. The title is distributed via Douyin, the Chinese version of TikTok, and the news aggregator Jinri Toutiao, which belongs to ByteDance. However, it’s also available on Tencent’s WeChat, which perhaps means that Tencent does not yet seriously consider ByteDance as its rival in gaming.

Third, the virus-themed project might very well become a success in the country. After all, since the coronavirus outbreak in Wuhan, the most downloaded paid game in China has been Plague Inc., a virus sim developed by UK-based Ndemic Creations. Plus, as millions of Chinese players are staying in these days, there has been a surge in play time and in-game purchases across online games.