Why Apex Legends Mobile got shut down despite being EA’s sixth highest-grossing mobile game in 2022
21:14
Nintendo announces 10% pay raise for all Japanese employees to drive long-term growth
16:31
Activision Blizzard posts record quarterly bookings on Blizzard’s strong growth and Call of Duty blockbuster sales
14:21
Microsoft’s chances of clearing Activision Blizzard deal in US and Europe to fade away if UK watchdog decides to block it
13:01
John Carmack on video game preservation and why companies suffer more harm by destroying something dear to players
06.02
Jeff Gaimon on expanding EA Originals beyond just indie games: “It’s like a menu. It depends on what devs want”
06.02
It Takes Two hits 10 million unit sold. “Nobody expected this,” says Josef Fares
03.02
Over 1 million Chinese players apply for refunds due to expiration of Blzzard’s agreement with NetEase
03.02
NCSoft West lays off 20% of employees as part of ‘global realignment’
03.02
Organic discovery and app store featuring to be declared dead in 2023, according to Deconstructor of Fun
02.02
All news
Industry News 16.08.2019 16:39

The rise of non-violent games

While rhetoric goes on that connects real-life violence to violent games, media keep citing research that defies any linear correlation between the two.

Vox posted a chart showing that the roots of gun-related violence clearly lie elsewhere than the game consumption. 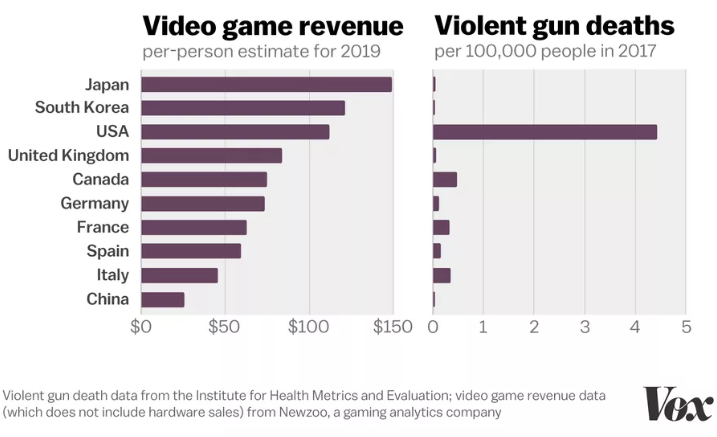 Other studies indicate that games, specifically violent in nature, are a good way for people to let their natural aggression out on digital opponents, thus making them less likely to commit acts of violence in real life.

Still others reasonably argue that if you’re home playing games, you can’t simultaneously be out there causing trouble. In fact, violence decreases around the time new games are released.

Be that as it may, one thing is clear: stigmatizing all video games as a medium cannot be right.

Last week, TIME published on the rising phenomenon of “pacifist games.” These titles often deal with mature themes of loss, grief, failure to communicate and utilize an exploratory gameplay. Examples include What Remains of Edith Finch, Florence, Journey, and Firewatch.

The term “pacifist” might not be a very apt one as it clearly hints at intrinsic violence of the titles outside of this category. Plus, it would be reductive to describe the whole diversity of the medium using this pacifist/violent dichotomy.

What remains clear is that games are becoming more experimental both in terms of gameplay and ideas they touch on.

Chris Charla, senior director of Microsoft’s [email protected] program, attributes this to the rise of the digital distribution In the late 2000s and arrival of new game creation tools. Digital marketplaces reduced the cost of making games, freeing studios to try new things.  And the very process of making games became easier, with Unity and Unreal Engine allowing more underrepresented artists to take on game development.

Shooters are not going anywhere. Not anytime soon. Neither are those who try to blame real-world violence on games. But hopefully, among other things, it will draw more attention to this whole other part of the gaming landscape that’s becoming a legitimate part of the social discourse.