PlayStation reports 53% Q3 revenue growth, driven by strong sales of consoles and third-party games
14:25
Tenjin and GameAnalytics release Q4 Hyper-Casual Games Benchmark Report
01.02
Chris Zukowski: Steam can only promote up to around 500 indie games per year
30.01
Wargaming top manager called a terrorist by KGB Belarus
30.01
AI USE CASE: How a mobile game development studio saved $70K in expenses
27.01
Sensor Tower: Subway Surfers was most downloaded game in Q4 2022, but the Stumble Guys showed fastest growth
26.01
The Day Before loses its page on Steam. Developer cites trademark complaint
25.01
125 games industry professionals from 85 companies attended WN Connect business event in Belgrad
24.01
Blizzard caught up in scandal. Again. This time it is all about ranking its employees
24.01
Cyberpunk 2077 quest director Paweł Sasko on game’s non-linearity: “Players expected more because of the fact how The Witcher 3 is built”
23.01
All news
Industry News 30.07.2019 17:32 The most downloadable battle royale game is Garena Free Fire from Singapore’s Garena. In April-June, the game was downloaded about 75 million times. 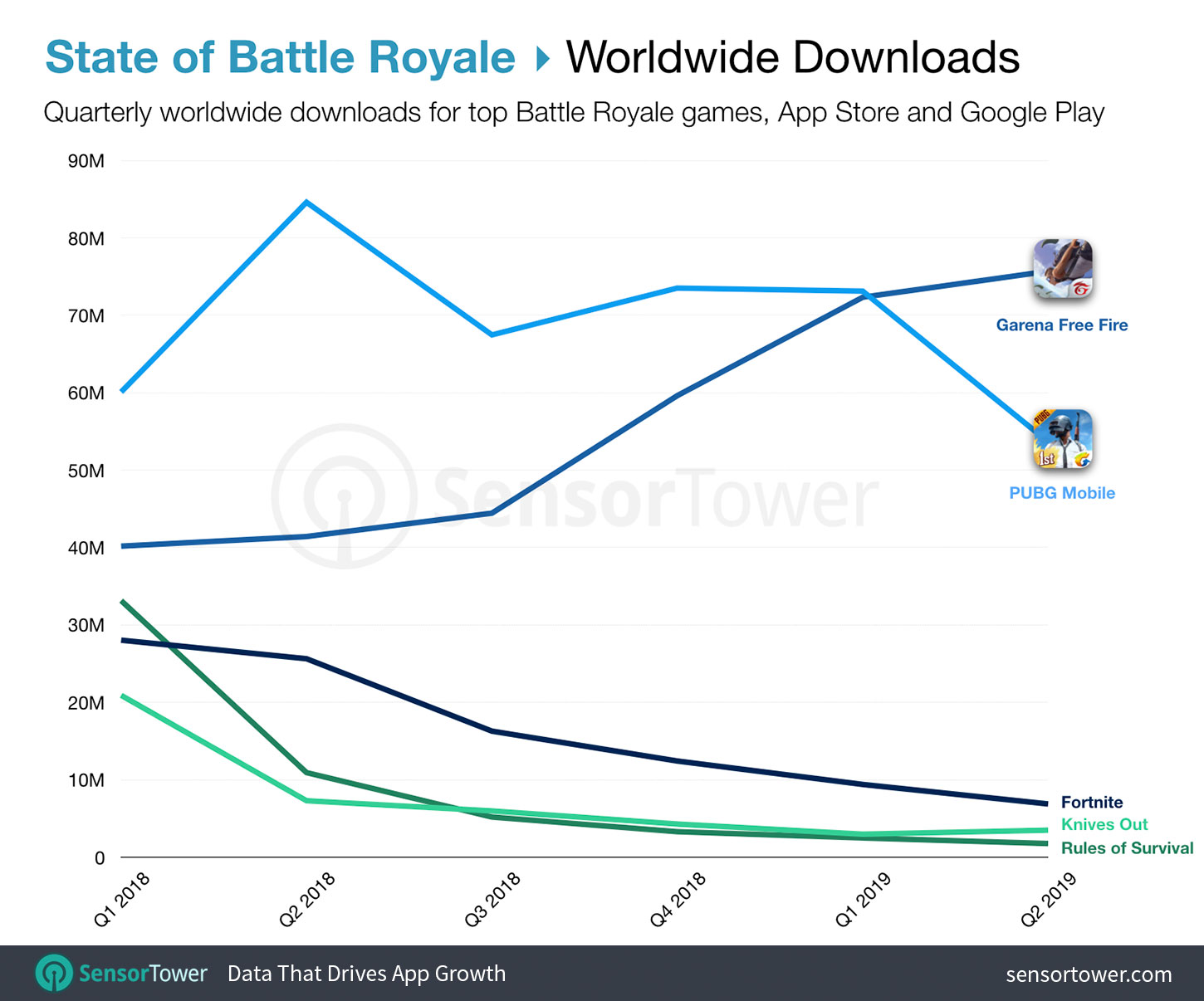 Lately, PUBG Mobile has been seeing a drop in the number of downloads. This should come as no surprise as Tencent no longer supports the game in China. The reason for that is that the local regulators have made it impossible to monetize the game. Since April, the publisher has been trying to migrate all PUBG Mobile users to another battle royale title Game for Peace, which was approved by the authorities. The fact that Sensor Tower has included Game for Peace downloads in the PUBG Mobile stats means that the process had not been without difficulties.

Equally interesting is the distribution of game downloads by country. The chart below shows that the popularity of each game strongly depends on the region. In China, the biggest game is PUBG Mobile, in Southeast Asia – Garena Free Fire, and in the Japanese archipelago – Knives Out from NetEase. 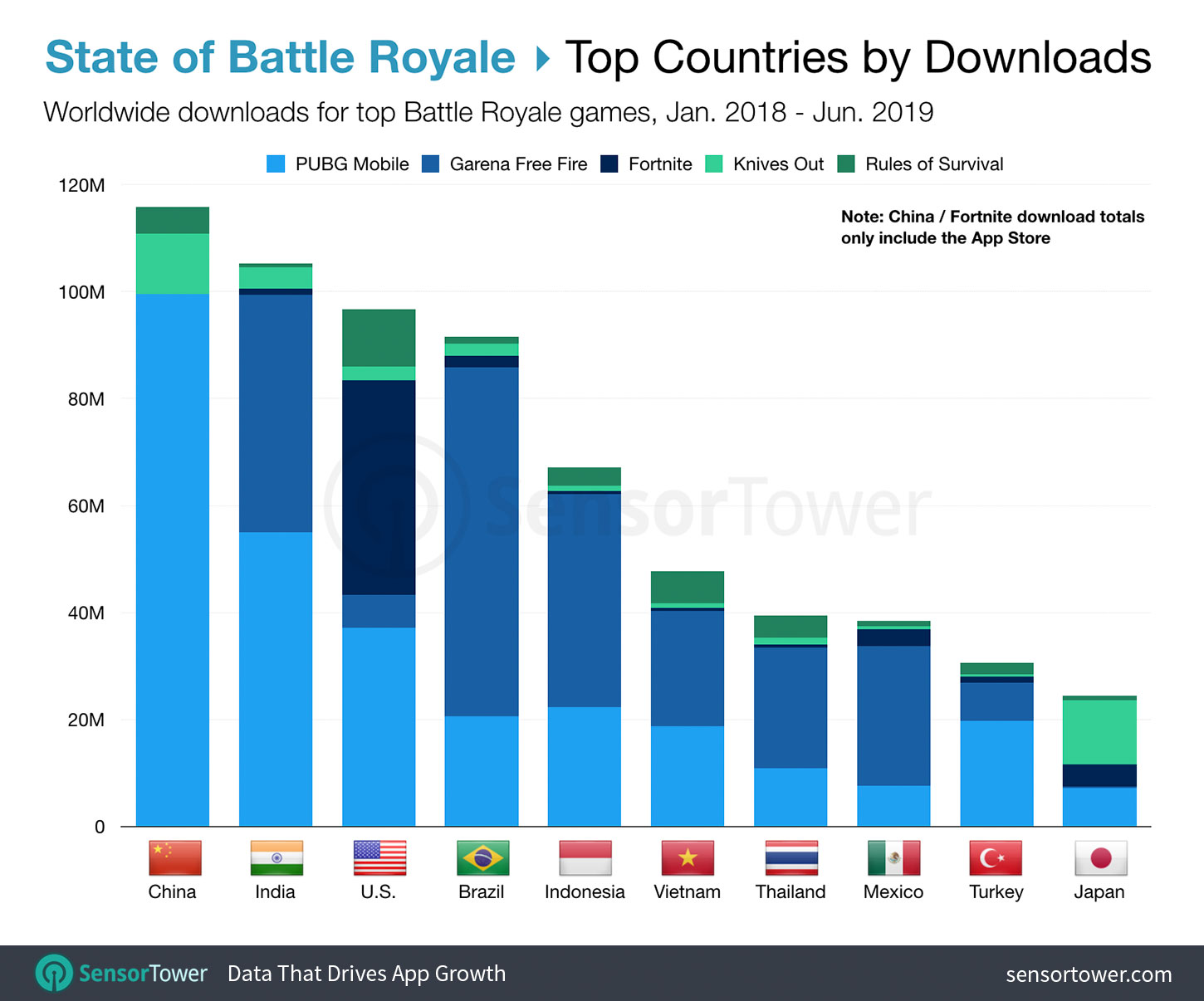 The highest-grossing mobile battle royale game is PUBG Mobile (along with Game for Peace). In the second quarter of 2019, it generated about $350 million. As for Fortnite, which is popular in the West, it is not even among the top three by revenue. Garena Free Fire, whose main market is Brazil (it brought in $55 million in the game’s quarterly earnings), and Knives Out are ahead of it. 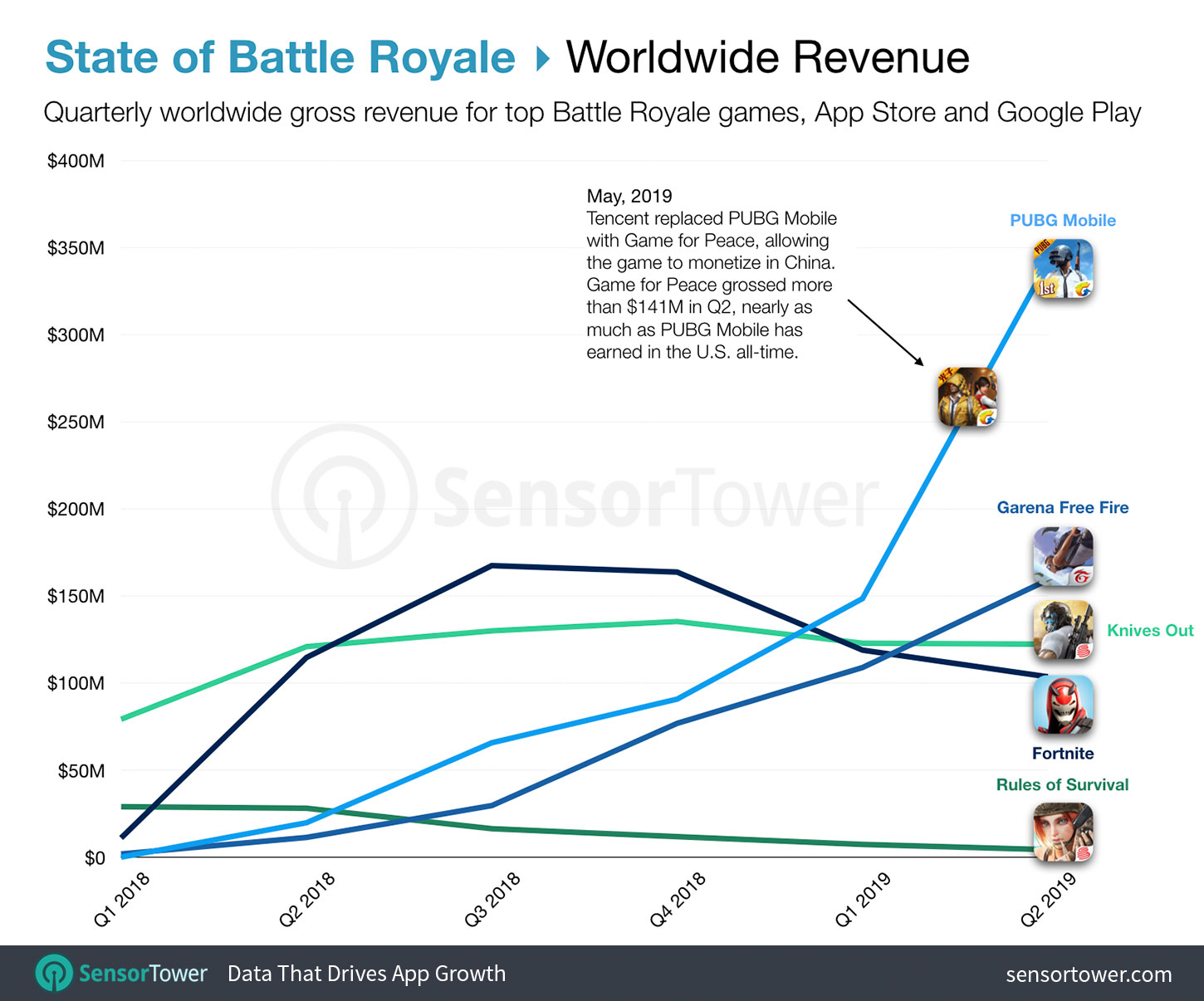 However, we get a different picture if we look at the totals of all battle royale games since January 2018. It turns out that the highest-grossing mobile game in this genre is Knives Out, which earned $711 million for the period. Fortnite nominally ranks second with its $679 million revenue on iOS. There is no information on the game’s total revenue on mobile because its Android copies were released outside of official stores. 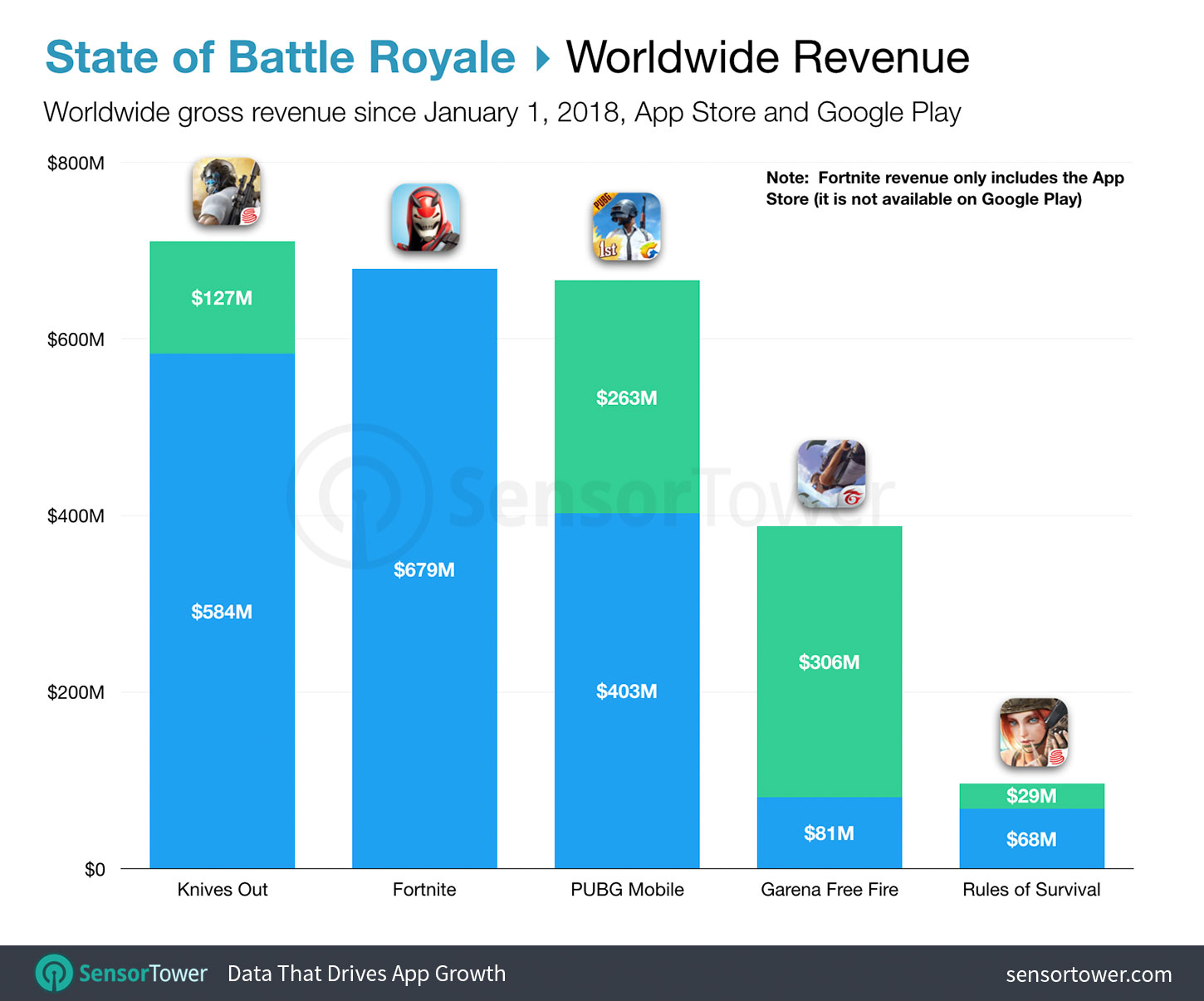 Again, each country has its own leader in the genre. In Japan, Knives Out earns the most, in the US, Fortnite is the top grossing game, in China the main player is PUBG Mobile, and in the Southeast Asia it is Garena Free Fire.