Organic discovery and app store featuring to be declared dead in 2023, according to Deconstructor of Fun
02.02
Dwarf Fortress made $7.2 million in January, 44 times more than in all of 2022
02.02
PlayStation reports 53% Q3 revenue growth, driven by strong sales of consoles and third-party games
02.02
Tenjin and GameAnalytics release Q4 Hyper-Casual Games Benchmark Report
01.02
Chris Zukowski: Steam can only promote up to around 500 indie games per year
30.01
Wargaming top manager called a terrorist by KGB Belarus
30.01
AI USE CASE: How a mobile game development studio saved $70K in expenses
27.01
Sensor Tower: Subway Surfers was most downloaded game in Q4 2022, but the Stumble Guys showed fastest growth
26.01
The Day Before loses its page on Steam. Developer cites trademark complaint
25.01
125 games industry professionals from 85 companies attended WN Connect business event in Belgrad
24.01
All news
Industry News 17.06.2019 17:44

Among titles presented at E3, only 5% of games featured female protagonists. As far as E3 stage presenters are concerned, women accounted for 21%.

The stats were published by Wired in colloboration with Feminist Frequency, an initative that has analyzed the games industry from the gender perspective since 2015.

The study included Microsoft, Nintendo, Ubisoft, EA, Bethesda , and Square Enix conferences, along with the PC Gaming Show. Just six out of 126 games presented at the show centered around female protagonists. This stat showed the second lowest result since 2015, when it was 3%. 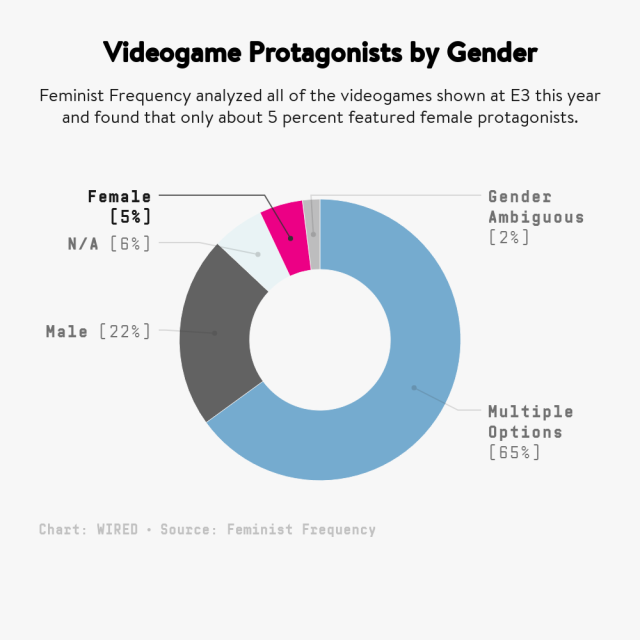 However, 65% of all games featured at E3 either have protagonists of different genders or allow players to choose whether they want to play as a male or female character. And that is the highest result in five years.

“It’s also essential to note that the raw numbers say nothing whatsoever about the quality of these representations. The mere fact that Youngblood’s protagonists are women is no guarantee whatsoever that those representations will be good ones. Games can and often do centre women while also reinforcing harmful stereotypes or turning those women into sexual fantasies for the benefit of straight male players. Still, we can hope.”

The study also pointed out among all E3 speakers, women only made up 21%.

On a related note, the report analyzed the 126 E3 games from the standpoint of violence as part of their gameplay. It turned out that 107 are based on combat of some form.

“It would be easy to get disheartened by the lack of significant statistical change we’ve seen over five years of collecting this data, but we choose simply to take it as an indication that there is still work to be done,” the report says.