It Takes Two hits 10 million unit sold. “Nobody expected this,” says Josef Fares
18:22
Over 1 million Chinese players apply for refunds due to expiration of Blzzard’s agreement with NetEase
14:58
NCSoft West lays off 20% of employees as part of ‘global realignment’
13:09
Organic discovery and app store featuring to be declared dead in 2023, according to Deconstructor of Fun
02.02
Dwarf Fortress made $7.2 million in January, 44 times more than in all of 2022
02.02
PlayStation reports 53% Q3 revenue growth, driven by strong sales of consoles and third-party games
02.02
Tenjin and GameAnalytics release Q4 Hyper-Casual Games Benchmark Report
01.02
Chris Zukowski: Steam can only promote up to around 500 indie games per year
30.01
Wargaming top manager called a terrorist by KGB Belarus
30.01
AI USE CASE: How a mobile game development studio saved $70K in expenses
27.01
All news
Events 09.12.2022 18:21

WN Dev Day Canada’22 took place on December 6, bringing together hundreds of game creators. Here are the results of the online event and the winners of a special contest for local developers. The Xsolla-sponsored event was largely focused on the Canadian game development scene. So it is no surprise that 32% of participants were from North America. The shares of the Europe and APAC regions were 20% and 14%, respectively.

Overall, 49 games from Canadian developers took part in the contest. 69% of these titles were made with Unity, followed by Unreal Engine (25%) and GameMaker Studio (4%).

PC was the most popular target platform, with 80% of participants making projects for it. 27% and 20% of titles were made for console and mobile, respectively.

When it comes to genres, Adventure and Puzzle together accounted for 52% of all participating games. The top 5 also includes Action (24%), Action-adventure (17%), and RPG (13%). 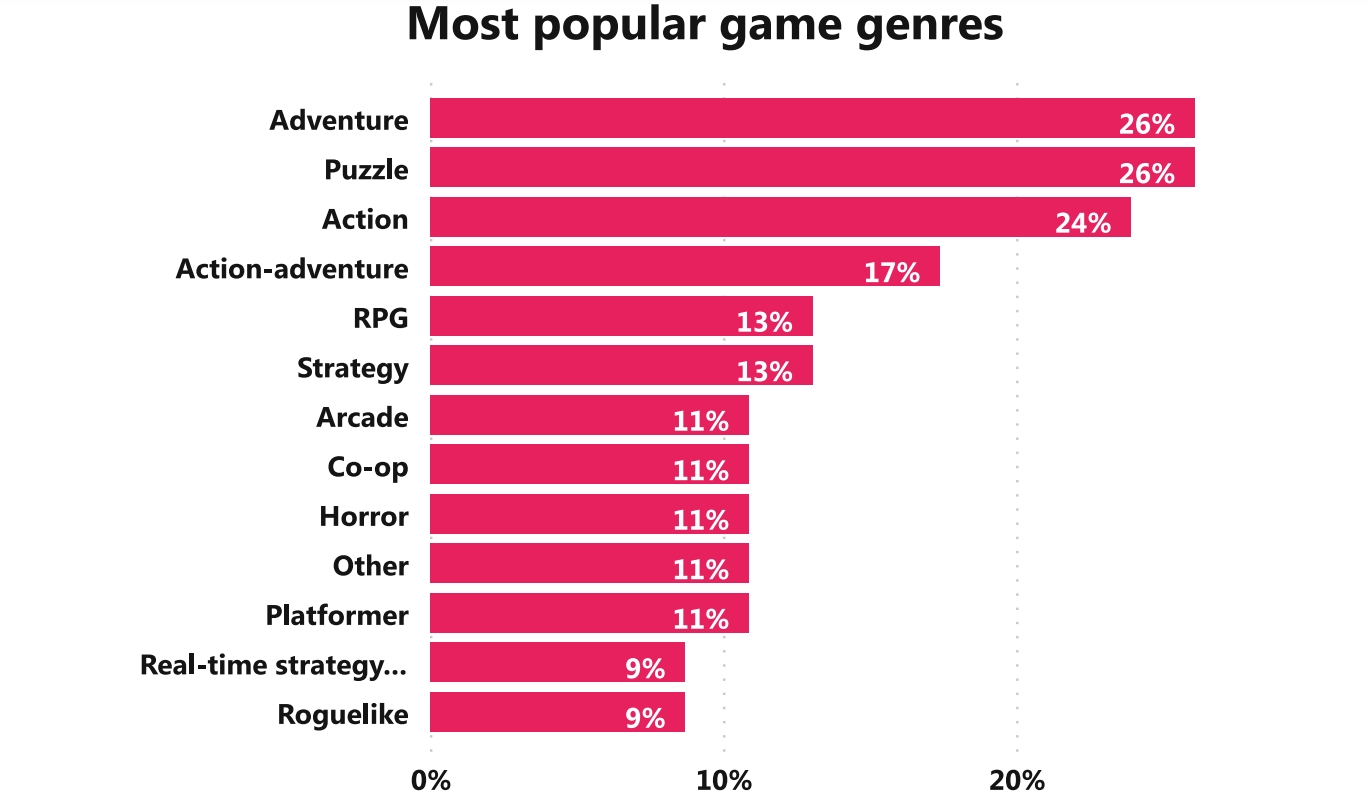 Three out of 49 games made it to the Xsolla Developer Contest finals.

Roots of Yggdrasil, a narrative-driven title that combines elements of roguelike and city-building genres. Developed by Montreal-based team ManaVoid Entertainment, the game is set in a post-Ragnarok world where the player has to restore their Viking clan.

Slay the Princess, a visual novel / psychological horror from Black Tabby Games that draws inspiration from the works of H.P. Lovecraft. The goal is to kill the princess who will try to charm and convince the player to spare her life.

These finalists will receive a streamlined application to Xsolla Funding Club, free setup and launch of Xsolla Webshop Solution, as well as job posting support from 80 level Talent.

Shadow’s Light – Tale of the Champions from indie studio 3Mind Games was named the winner of Xsolla Developer Contest. It is a dark fantasy adventure game, which allows the player to choose from eight different characters and replay the same story from the perspectives of two opposing factions.

You can watch the gameplay footage from the first playable prototype of Shadow’s Light here and take a look at the game’s concept art below.

Information about last year’s winners can be found in our previous Game Developer Day Canada report.