PlayStation reports 53% Q3 revenue growth, driven by strong sales of consoles and third-party games
14:25
Tenjin and GameAnalytics release Q4 Hyper-Casual Games Benchmark Report
01.02
Chris Zukowski: Steam can only promote up to around 500 indie games per year
30.01
Wargaming top manager called a terrorist by KGB Belarus
30.01
AI USE CASE: How a mobile game development studio saved $70K in expenses
27.01
Sensor Tower: Subway Surfers was most downloaded game in Q4 2022, but the Stumble Guys showed fastest growth
26.01
The Day Before loses its page on Steam. Developer cites trademark complaint
25.01
125 games industry professionals from 85 companies attended WN Connect business event in Belgrad
24.01
Blizzard caught up in scandal. Again. This time it is all about ranking its employees
24.01
Cyberpunk 2077 quest director Paweł Sasko on game’s non-linearity: “Players expected more because of the fact how The Witcher 3 is built”
23.01
All news
Industry News 15.04.2022 16:40

GitHub has started suspending accounts of Russia-registered users in accordance with the latest full blocking sanctions placed by the US. This affected not only large banks, but individual developers as well.

The news was reported on IT blog Habr, with user nicknamed Veratam noting that accounts of Russia’s financial institutions like Sber and Alfa Bank have been blocked.

A few Russian users also pointed out that their personal accounts were suspended, saying that they haven’t received any response from GitHub support yet. It is worth noting that when blocking a corporate account, access to repositories remains for a couple of hours, while personal accounts are suspended immediately.

According to Habr, some users also received notifications from GitHub, reading that their accounts might be operated from a sanctioned region. In this case, a developer can file an appeal to check whether a company is located in North Korea, Crimea, Cuba, Iran, and Syria. 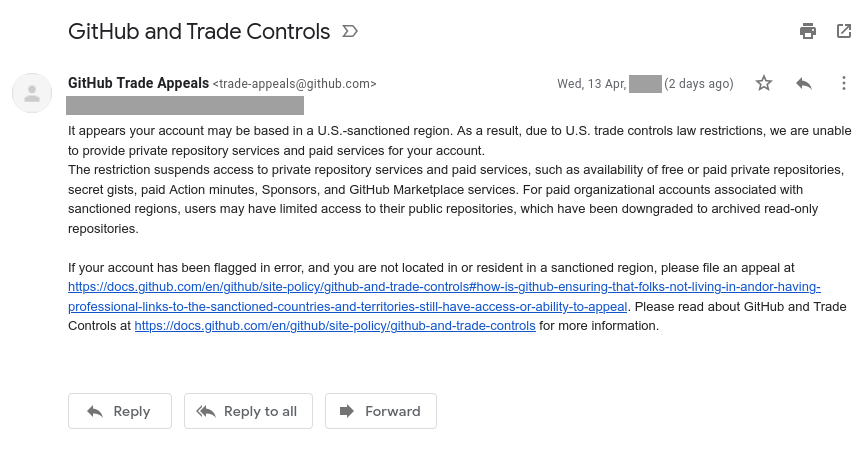 On April 6, the US Department of Treasury placed full blocking sanctions on Alfa Bank and Sberbank, freezing their assets and prohibiting US persons from doing business with them.