Tenjin and GameAnalytics release Q4 Hyper-Casual Games Benchmark Report
01.02
Chris Zukowski: Steam can only promote up to around 500 indie games per year
30.01
Wargaming top manager called a terrorist by KGB Belarus
30.01
AI USE CASE: How a mobile game development studio saved $70K in expenses
27.01
Sensor Tower: Subway Surfers was most downloaded game in Q4 2022, but the Stumble Guys showed fastest growth
26.01
The Day Before loses its page on Steam. Developer cites trademark complaint
25.01
125 games industry professionals from 85 companies attended WN Connect business event in Belgrad
24.01
Blizzard caught up in scandal. Again. This time it is all about ranking its employees
24.01
Cyberpunk 2077 quest director Paweł Sasko on game’s non-linearity: “Players expected more because of the fact how The Witcher 3 is built”
23.01
Key success factors for ZERO Sievert, top-down extraction shooter that generated over $1 million in its first week
23.01
All news
Industry News 21.03.2022 13:10

Humble has launched the Stand with Ukraine bundle, which has raised nearly $10 million so far. 100% of the proceeds will go to humanitarian crisis relief efforts. 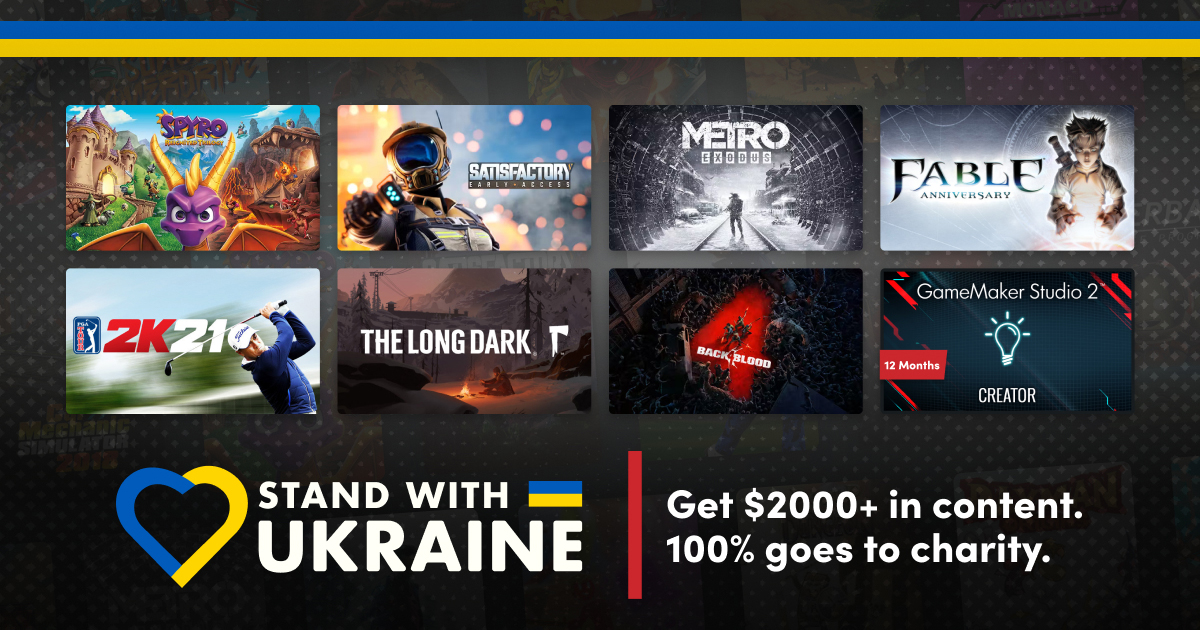 The Stand with Ukraine bundle went live on March 18 and has raised $9,900,019 at the time of writing this article.

“To help out how we can, we’ve joined forces with game creators, book publishers, and software makers around the globe for a bundle 100% dedicated to supporting the victims and refugees from Ukraine during this crisis,” Humble wrote in a statement.

The bundle contains more than 120 items worth over $2500. The list of games includes Back 4 Blood, Satisfactory, Metro Exodus, Fable Anniversary, Max Payne 3, Quantum Break, This War of Mine, Slay the Spire, and The Long Dark.

Humble’s fundraiser will end later this week. Every person can pay a minimum of $40 (or any other sum) for the bundle, with 100% of the donation going to charity. The proceeds will be split between the International Rescue Committee, International Medical Corps, and Direct Relief.

Last week, itch.io finished a similar fundraiser. Its Bundle for Ukraine raised $6.3 million, which will go to the International Medical Corps and Voice of Children.