Tenjin and GameAnalytics release Q4 Hyper-Casual Games Benchmark Report
01.02
Chris Zukowski: Steam can only promote up to around 500 indie games per year
30.01
Wargaming top manager called a terrorist by KGB Belarus
30.01
AI USE CASE: How a mobile game development studio saved $70K in expenses
27.01
Sensor Tower: Subway Surfers was most downloaded game in Q4 2022, but the Stumble Guys showed fastest growth
26.01
The Day Before loses its page on Steam. Developer cites trademark complaint
25.01
125 games industry professionals from 85 companies attended WN Connect business event in Belgrad
24.01
Blizzard caught up in scandal. Again. This time it is all about ranking its employees
24.01
Cyberpunk 2077 quest director Paweł Sasko on game’s non-linearity: “Players expected more because of the fact how The Witcher 3 is built”
23.01
Key success factors for ZERO Sievert, top-down extraction shooter that generated over $1 million in its first week
23.01
All news
Industry News 13.08.2019 16:34

South Korea is the 4th top economy by video games revenue after the US, China, and Japan.

Dolly Dai, BD Manager at LocalizeDirect, a localization company focusing on Asia, wrote a blog post on the state of the South Korean market. 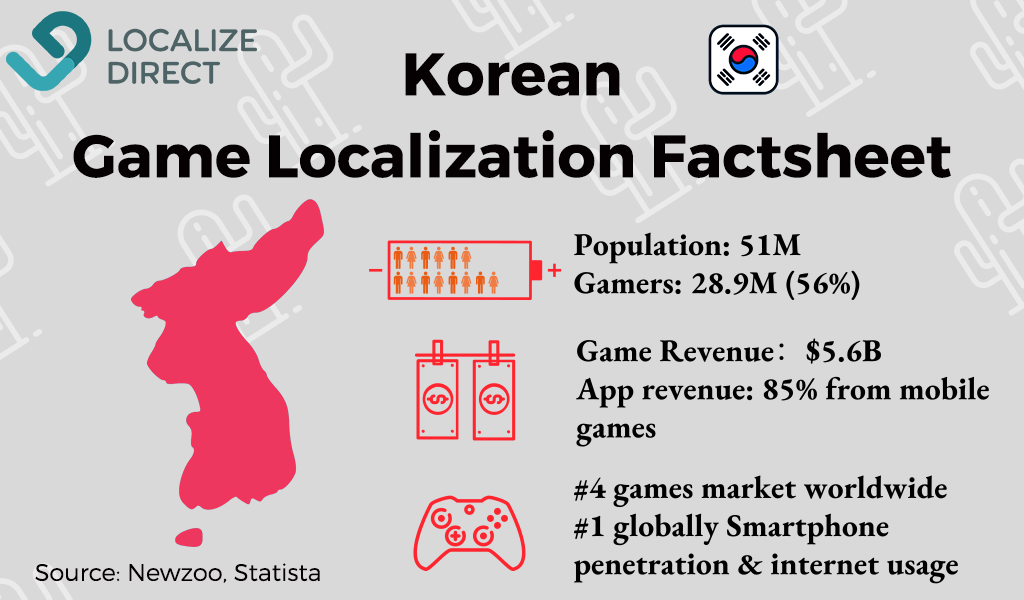 While not on par with China’s $37.9 billion games revenue, South Korea saw its gamers spend $6.2 billion on games in 2019. That’s way more than the corresponding revenues of Germany, the United Kingdom, Australia, and France.

Out of the country’s 29 million gamers (56 percent of the entire population), nearly half pay to play. On average, a Korean gamer can spend as much as $200 per year on games.

The mobile segment, which is the leading platform for gaming, is particularly lucrative. Mobile games account for 85% of the total app revenue. This share is even higher than in China or Japan.

Free-to-play is the most popular model (although the post actually uses the term “freemium,” but the context makes it clear that the biggest hits are f2p games with IAP monetization).

Unlike China and other Asian markets, Korea has almost zero censorship, which makes it much easier for foreign studios to compete locally.

The most popular genre in South Korea is RPG.

Men like MMORPG or RPG adventure games. RPGs is popular with women too, but they also like puzzle, web board games, and casual titles.

To become a hit in Korea, a title absolutely has to have some kind of social play or coop element to it. The biggest motivation for spending on in-app purchases is the desire to not let down the team of your friends that you play with. Koreans tend to purchase extra lives just so that others do not have to wait for them to continue playing together.

Mobile developers should know that Android is by far the leading platform in Korea, with 72% of the smartphone owners using it.

Google Play is present in Korea. However, you might want to take advantage of the distribution network of Kakao (aka Korean Tencent) that is responsible for the popular messenger KakaoTalk. Over 50 million users install games via Kakao Talk. Additionally, Kakao Talk enables many socila feauters integrated in games. When King launched its Candy Crush Saga for Kakao six years ago, the studio integrated special features for the Korean gamers that included sending requests to friends via KakaoTalk or sharing exclusive emojis.

As far as the localization is concerned, Dai cautions that Koreans expressly prefer their own language over English, so you might want to have a budget for translating your game.

In terms of imagery and themes, Korea is pretty liberal, but games featuring excessive violence, like Mortal Kombat or Manhunt, did end up being prohibited. Also it might be wise not to reference in any way the Korean war and relationships with China and Japan.

The key takeaway is that it’s a market definitely worth pursuing for foreign developers and publishers. Candy Crush, Minecraft, Terraria, Crash of Clans all did very well in South Korea.

The full text of the post is available here.