Chris Zukowski: Steam can only promote up to around 500 indie games per year
30.01
Wargaming top manager called a terrorist by KGB Belarus
30.01
AI USE CASE: How a mobile game development studio saved $70K in expenses
27.01
Sensor Tower: Subway Surfers was most downloaded game in Q4 2022, but the Stumble Guys showed fastest growth
26.01
The Day Before loses its page on Steam. Developer cites trademark complaint
25.01
125 games industry professionals from 85 companies attended WN Connect business event in Belgrad
24.01
Blizzard caught up in scandal. Again. This time it is all about ranking its employees
24.01
Cyberpunk 2077 quest director Paweł Sasko on game’s non-linearity: “Players expected more because of the fact how The Witcher 3 is built”
23.01
Key success factors for ZERO Sievert, top-down extraction shooter that generated over $1 million in its first week
23.01
Dragon Age: Dreadwolf production director Mac Walters leaves BioWare after almost 20 years
23.01
All news
Industry News 16.07.2019 13:14

Success ratio on Kickstarter highest since 2012

Thomas Bidaux, CEO of gaming consultancy firm ICO Partners, has shared data on how the first half of 2019 has treated video games on Kickstarter. 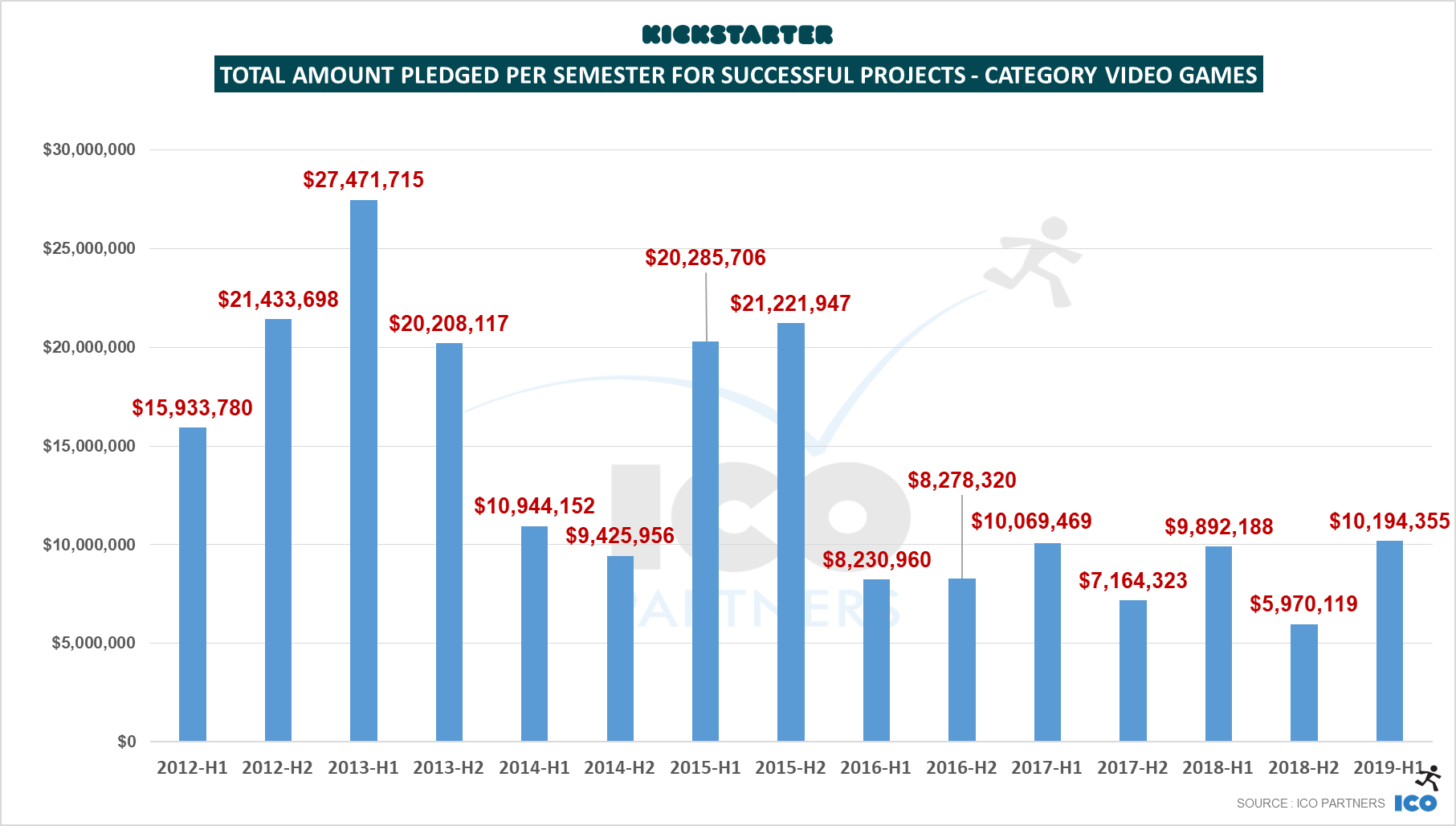 Interestingly, this happened against the backdrop of the general decline in the number of submitted projects. Developers have submitted 678 projects in the first six months of 2019. It’s the lowest since the first half of 2013.

The number of funded projects, on the other hand, has been steadily growing since 2017. Out of 678 campaigns in 2019 so far, 193 got the funding. That’s a 28% success ratio – something the platform hasn’t seen since the launch of the Double Fine Adventure campaign in 2012. 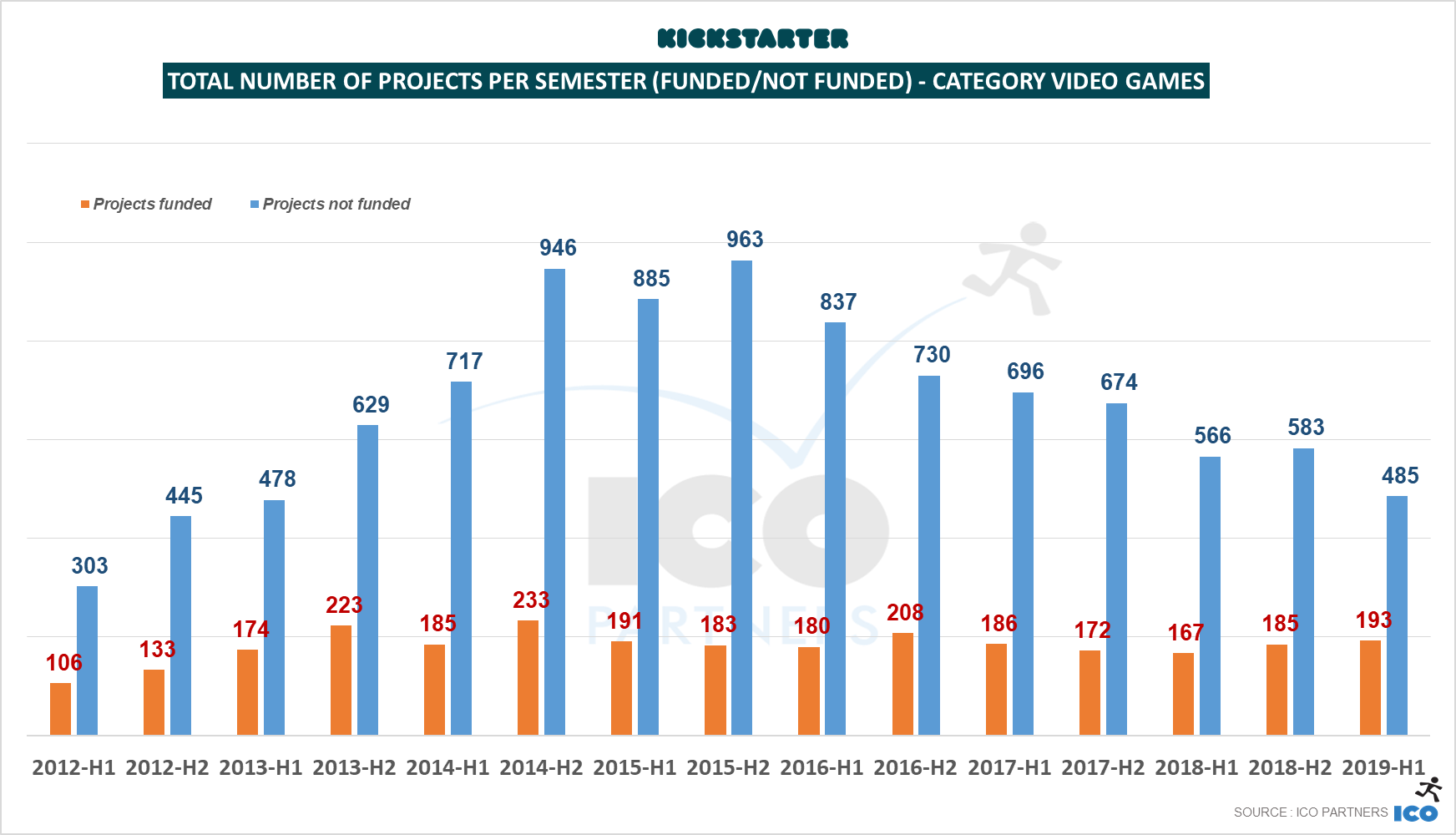 Here’s a breakdown of how many games raised how much:

By the way, the biggest campaign (£1,668,626 / $2,192,000) for the period has been Subverse, an adult-themed title that got over 58,000 backers excited. 8% of them are from China, making Subverse the first project on the platform that has seen any significant backing from this country.

In another interesting trend, the projects funded in USD only account for 43% of all successful campaigns on Kickstarter in 2019. That’s a new one because historically projects in USD have always made up more than a half. The second most used currency on the platform is GBP (25%), followed by EUR (19%), JPY (9%), and others (4%).

The bottom line, according to Bidaux, is that fewer developers pursue crowdfunding, but a higher number of campaigns succeed. Overall, the pledged numbers in 2019 have remained roughly in the same range that we’ve seen since 2015, which is a sign of Kickstarter’s maturity. It also stopped being a U.S.-centric platform, attracting lots of backers from Asia.

Earlier, Bidaux shared some cool tips for crowdfunding campaigns. You can watch his talk here.