Organic discovery and app store featuring to be declared dead in 2023, according to Deconstructor of Fun
02.02
Dwarf Fortress made $7.2 million in January, 44 times more than in all of 2022
02.02
PlayStation reports 53% Q3 revenue growth, driven by strong sales of consoles and third-party games
02.02
Tenjin and GameAnalytics release Q4 Hyper-Casual Games Benchmark Report
01.02
Chris Zukowski: Steam can only promote up to around 500 indie games per year
30.01
Wargaming top manager called a terrorist by KGB Belarus
30.01
AI USE CASE: How a mobile game development studio saved $70K in expenses
27.01
Sensor Tower: Subway Surfers was most downloaded game in Q4 2022, but the Stumble Guys showed fastest growth
26.01
The Day Before loses its page on Steam. Developer cites trademark complaint
25.01
125 games industry professionals from 85 companies attended WN Connect business event in Belgrad
24.01
All news
Industry News 08.07.2019 17:14

Sensor Tower: Users spent $29.6 billion on mobile games in first half of 2019

Mobile games brought in about 75% of the global $39.7 billion app revenue in the first half of the year. So far, customers have spent $29.6 billion on games.

The figure provided by Sensor Tower represents spending across Google Play and the App Store. 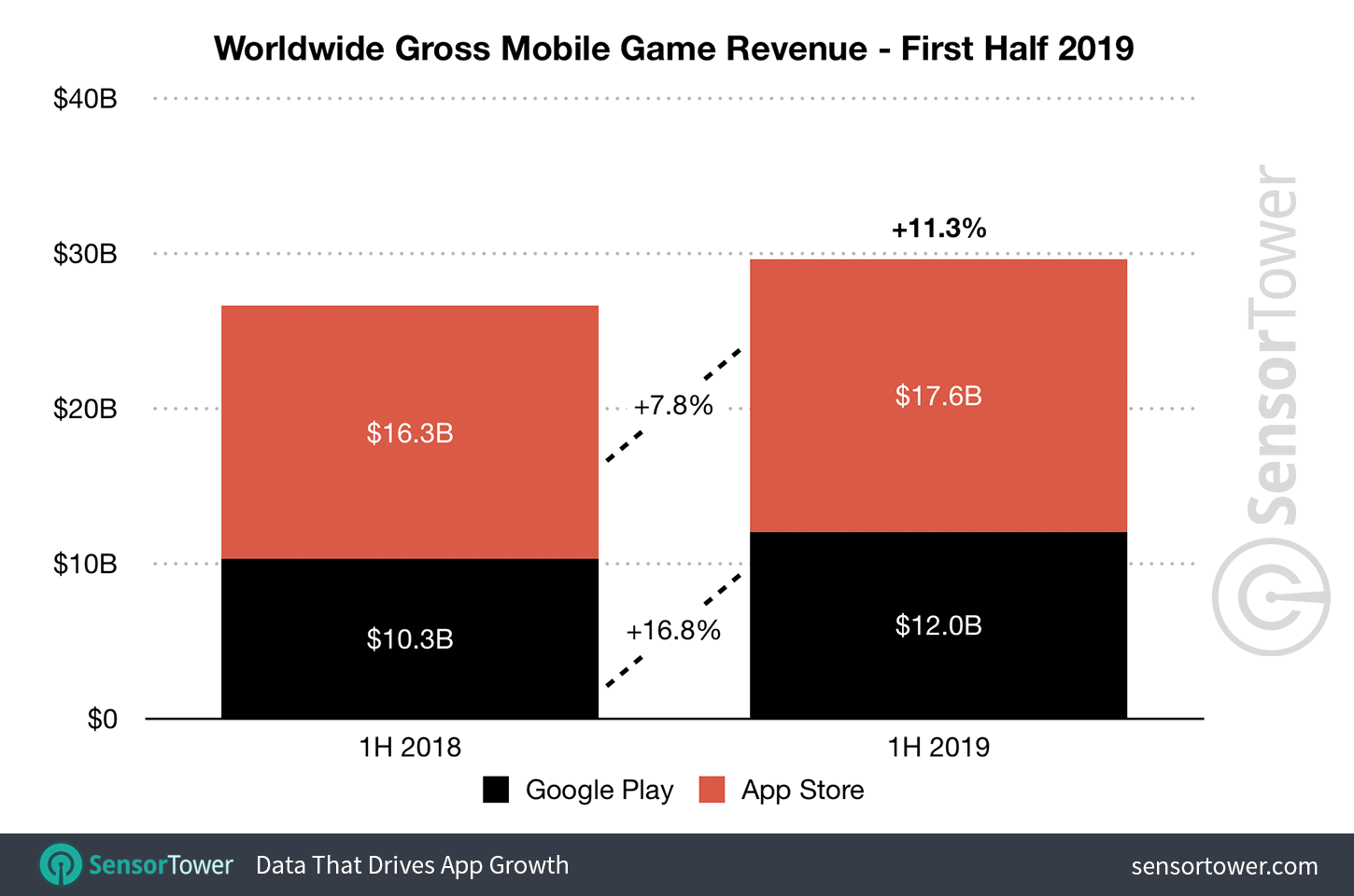 The overall spending on apps has grown by 15.4% year-on-year. Game revenue alone was up 11.3% even though the growth slowed down on iOS in China. Thus, App Store spending accounted for $17.6 billion which is 7.8% more than last year. Spending on Google Play increased by 16.8% and reached  $12 billion.

The report lists top 5 games by revenue. Honor of Kings by Tencent has brought in $728 million (excluding China’s numerous Android stores). Fate/Grand Order by Sony Aniplex grossed $628 million. Monster Strike from Mixi is No. 3, with $566 million revenue. Candy Crush Saga from King and PUBG Mobile from Tencent ranked at No. 4 and No. 5. The latter grossed $141 million on iOS alone, which includes the revenue from the title’s Chinese version Game for Peace.

In the first half of 2019, mobile games were downloaded 20.1 billion times, which is up 3.2% year-on-year. The most downloaded titles were Color Bump 3D from Good Job Games, Garena Free Fire from Garena, and PUBG Mobile from Tencent.