Chris Zukowski: Steam can only promote up to around 500 indie games per year
30.01
Wargaming top manager called a terrorist by KGB Belarus
30.01
AI USE CASE: How a mobile game development studio saved $70K in expenses
27.01
Sensor Tower: Subway Surfers was most downloaded game in Q4 2022, but the Stumble Guys showed fastest growth
26.01
The Day Before loses its page on Steam. Developer cites trademark complaint
25.01
125 games industry professionals from 85 companies attended WN Connect business event in Belgrad
24.01
Blizzard caught up in scandal. Again. This time it is all about ranking its employees
24.01
Cyberpunk 2077 quest director Paweł Sasko on game’s non-linearity: “Players expected more because of the fact how The Witcher 3 is built”
23.01
Key success factors for ZERO Sievert, top-down extraction shooter that generated over $1 million in its first week
23.01
Dragon Age: Dreadwolf production director Mac Walters leaves BioWare after almost 20 years
23.01
All news
Industry News 11.06.2019 15:19

Publishers with big portfolios will be able to include their own subscriptions on top of Stadia subscription. 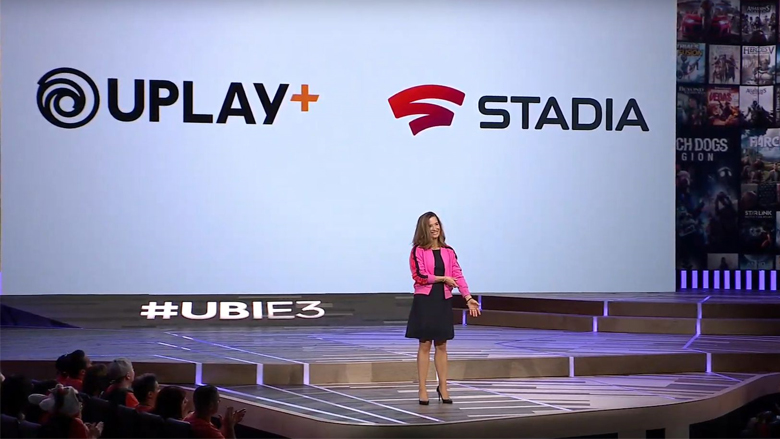 Last week, Google announced that 4K streaming available through Stadia Pro will cost users $9.99 per month. That does not cover the price of games that will be sold separately. Alternatively, Stadia players could access games through subscription services of individual publishers. The news came from Google Stadia lead Phil Harrison.

As all new things in game streaming are only conveyed using television metaphors, YouTube’s E3 Live host Geoff Keighley didn’t fail to use one in this instance. To use Keighley’s analogy, it’s like buying an HBO subscription on top of a paid cable TV package.

Harrison stressed, however, that additional subscriptions will only be available for bigger publishers with “significant line-ups.”

As far as significant line-ups go, Ubisoft has just that. And from September 3, 2019 the publisher will also have its own game subscription called Uplay Plus. So its no surprise that in addition to PC, Uplay Plus be accessible via Stadia.

The players will be able to enjoy the library of 100+ Ubisoft games for $14.99/€14.99 a month. It will include all the legacy titles along with the upcoming games like Watch Dogs Legion and Ghost Recon Breakpoint.

With this, we can now start planning our games subscription budget for this fall.